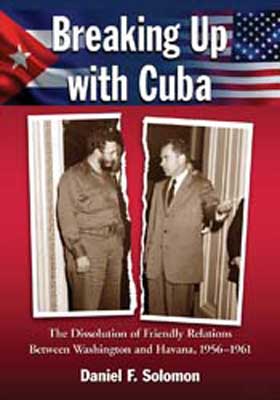 HAVANA TIMES, April 9 — If I had to summarize in one word my book review of “Breaking Up With Cuba: The Dissolution of Friendly Relations Between Washington and Havana, 1956-1961”, by Daniel F. Solomon,  it would be WOW!

This is one incredible piece of research: 229 pages detailing only five years of US-Cuban relations, meticulously referenced and annotated in another 55 pages (small font), and accompanied by a 27 page bibliography.

While it might deserve to be classified under reference, it is by no means laborious, dry or boring. One seldom comes across a book nearly this informative and engaging at the same time.

Moreover, unlike most authors who delve into anything related to Cuba, Solomon’s style is inclusive and straight; he does not pick and chose the bits of history that fit a favored narrative.

Instead, his detached presentation of long ignored minutiae leads to myriad tiny revelations and “ah-ha!” moments that keeps the reader intrigued and eagerly turning pages.

Part I sets the scene providing an historical backdrop; examining closely US-Cuba diplomatic, economic and cultural ties leading up to the focus period; and placing this all in the context of the then world order.

Part II delves into the heart of the matter: the dissolution of friendly relations between Washington and Havana 1956-1961.

The fact that the author situates the beginning of the end well before the Triumph of the Revolution, the reader can rest assured that this book is not a simply a rehash of the same old debate, usually presented from the perspective of the author’s personal conviction, of whether Fidel Castro was a communist all along or was driven into the arms of the Soviets by US aggression and incompetence.

Instead, the author begins by coolly identifying chronic areas of contention and outlining the outrageous behavior of Batista that forced the US to pay attention.

Dealing with the first years of the Revolution, the author refreshingly does not feed us any romantic myths about any “side,” dwell on the “star actors,” or speculate on Fidel’s psyche. Instead he recounts the roles of forgotten rebel heroes (some later becoming turncoats or terrorists) and lower-ranking US bureaucrats who were responsible for assessing, devising, and carrying out US policy on the ground.

He calls out the bit actors in the CIA and Cuban opposition and chronicles their plots, schemes, and even executions. He also delves into sideline struggles.

Of particular interest to me was his telling of the “nationalization” of the Havana Sugar Kings baseball team at the whim of the United States Secretary of State Christian Herter. Until the last chapter, Solomon’s presentation is non-judgmental and he refrains from drawing lines of causality between events in an attempt lead his readers to his point of view.

However, in wrapping up the book, his subtly provides his analysis and respectfully pokes holes in some of the mainstream theories of why US- Cuba relations soured: US battle against socialism/communism, loss of US assets, personal animosity between leaders, etc.

The First Domino to Fall

He reminds us that the first domino to fall was the US seizure of $400 million of Cuban reserves held in US banks only weeks after Batista fled the island.

Solomon, currently an administrative law judge at the Department of Labor, explains that he developed an interest in the topic while living near the Little Havana neighborhood of Miami for more than 20 years.

There he was exposed to Cuban-American culture, experienced first-hand one facet of US-Cuba relations, and attended numerous lectures at local universities and libraries.

However, the author does not rely on the vague memories of bitter participants like the vast majority of contemporary authors of works regarding Cuba do. Instead, the painstaking research for this book was done at the Cuban Heritage Collection at the University of Miami library, the Florida International University library, the Library of Congress, and the National Security Archives at George Washington University.

The bulk of the material cited and listed in the bibliography consists of archived newspaper articles, which gives the text a fresh, play-by-play, and unmassaged quality. The only possible criticism might be that no research was done in Cuba and almost no Spanish language materials are cited in the notes or the bibliography.

There are also some errors in the text. For example the year of Ernest Hemingway’s death is wrongly stated as 1962 instead of 1961. The author mentions, without citation, that a “fire broke out” in Havana’s premier department store, “Europa” just after it had been nationalized and implies that this took place in December of 1960. It is likely the author was referring to El Encanto department store that was blown up on April 13, 1961; it had been nationalized in 1959.

In addition, the author states that while the 1905 extradition treaty between the US and Cuba is still in force, neither country has honored it since 1959. This is inaccurate. Cuba has returned criminals to the US in recent years– at least three in 2007 alone. There may be more errors if one went hunting them.

Overall, this book may be a bit too much in the trees for the reader unfamiliar with the overall history of US-Cuba relations, but it is required reading for anyone who considers themselves a “cubanologist,” even those who think they know it all. There is something new for everyone in this book.

Those tired of the various shallow and/or concocted narratives of the “break up,” will be delighted with this unique round up of “the facts as published at the time” and will want to add this book to their personal library to refer to again and again when considering such storylines.

Most importantly, anyone interested in the art of statecraft should place this book at the top of their reading list. As the author says, it is “a case study of how not to deal with foreign governments.”
—–

Breaking Up With Cuba:
The Dissolution of Friendly Relations Between Washington and Havana, 1956-1961.
By Daniel F. Solomon