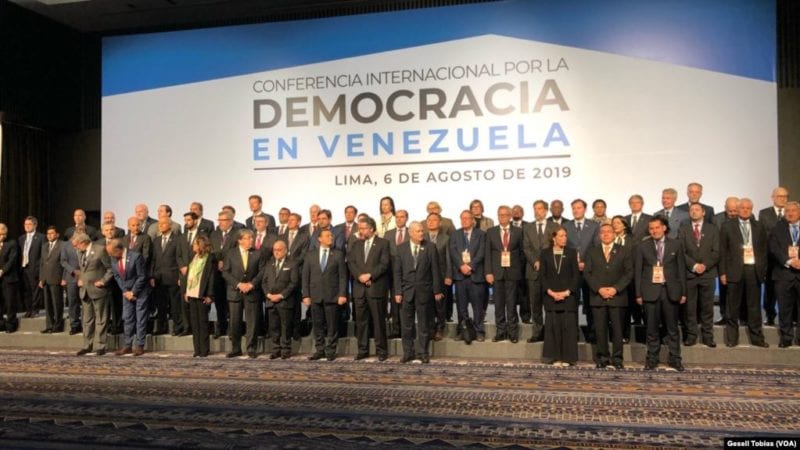 HAVANA TIMES – An international conference on Venezuela on Tuesday agreed to maintain diplomatic pressure on President Nicolas Maduro’s government, while many participants stressed the urgent need for fresh elections in the country.

“We shall maintain the international pressure,” news reports quoted Peruvian Foreign Minister Nestor Popolizio as saying at the end of the conference in the capital, Lima.

The meeting brought together representatives of more than 50 countries.

Maduro allies China, Russia, Cuba and Turkey did not attend. Neither did Mexico and Uruguay, which have tried to remain neutral in the power struggle between Maduro and opposition leader Juan Guaido, daily La Republica reported.

The International Contact Group on Venezuela (ICG), which includes European and Latin American countries, warned that “the rapidly deteriorating crisis is seriously impacting the region, particularly because of massive migration flows to neighboring countries.”

It called for “a negotiated transition that gives the voice back to the Venezuelan people, through free and credible presidential elections.”

“It is time to take decisions,” he said, calling for “an adequate international atmosphere to favor a peaceful solution,” including elections.

Colombian Foreign Minister Carlos Holmes Trujillo called for more support to Guaido, “more pressure” on Maduro and “more sanctions”
such as the freezing of Venezuelan government assets that the United States announced earlier on Tuesday.

US National Security Adviser John Bolton pressed Russia and China to withdraw their support for Maduro, warning that Russian military presence in the country could contribute to a “foreign intervention.”

“To both Russia and China, we say that your support to the Maduro regime is intolerable,” Bolton told the conference.

“China argues against foreign intervention in Venezuela, which is a good argument for all Cuban and Russian military and paramilitary forces to leave Venezuela immediately,” Bolton said.

Russia has admitted to sending military technicians to Venezuela as part of its defence cooperation with the South American country, but has denied deploying troops for military operations.

“We seek the peaceful transfer of power, but as [US] President [Donald] Trump has said from the beginning: ‘All options are on the table,'” Bolton said.

The ICG expressed its “strong rejection of any violent solution.”

Bolton addressed the conference shortly after Washington froze the assets of the Venezuelan government and prohibited US companies from doing business with the state.

“We are taking this step to deny Maduro access to the global financial system, and to further isolate him internationally,” the US national security adviser said.

The move was seen as a significant escalation of US attempts to force the resignation of Maduro, who won a second term in a disputed election last year and has presided over an economic collapse.

The Venezuelan government rejected the new sanctions as an act of “economic terrorism,” while Venezuela’s mission to the United Nations asked the UN Security Council to investigate US “threats” against the country.

The US Treasury said it maintained several authorizations that permit humanitarian-related transactions in Venezuela.

The Trump administration has already issued 30 rounds of sanctions targeting approximately 200 individuals and entities in the country, the White House said in a statement.

Over 1.4 million Venezuelans are living in neighbouring Colombia, which on Monday announced that it was granting Colombian citizenship to children born from Venezuelan parents on its territory since August 2015.