HAVANA TIMES, Dec. 6 — “You have to see the festival; there are some good things,” said Lazaro Leruan Reinoso, a young music student, as he raised his eye brows mischievously.   “The things are there.  You see them if you want.”

“Take Memorias del desarrollo, for example; in it are some grandiose scenes, like when they superimpose the image of Fidel making a speech (talking on behalf of Cuba, as always), saying that we don’t need the “gusanera” (a bunch of counter-revolutionary “maggots”), or the monologue by the exile saying something like: ‘Lie to me so that your evilness will be more beautiful,’ which suggests a lot, while the audience applauded enthusiastically to the scene.  Likewise, in a Brazilian movie, there’s a scene where a man is tired of eating just rice and beans.  With that, people in the theater immediately noted that our poverty is much worse that in the favelas, because here you can’t even find beans.  People’s reaction to such movies is a barometer for indicating how tired we are of the same political discourse, of the same food,” added Leruan. 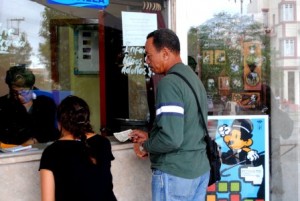 The film festival sparks debate between people; some who don’t even know each other, and others who see each other every year in December.  There are lines to get into the cinemas; it’s a moment in which people leave the comfort of their DVDs or TVs to socialize in the large theater lobbies.

At the exit of the Yara Cinema, a 17 year-old girl named Miritzia was arguing with a friend who also saw Como Olvidar, a Uruguayan movie that deals with getting over the loss of a loved one.  Horrified, she commented, “I didn’t see anything good in it; I got up and walked out.  What’s all this about one woman falling in love with another woman?  The truth is that I didn’t like it, and if the whole story was like this… just imagine!”

When the crowd is large, the numbers of points of view are multiplied, and what comes to the surface are the prejudices, complexes and intolerances of many people, as well as acceptance and respect by some. 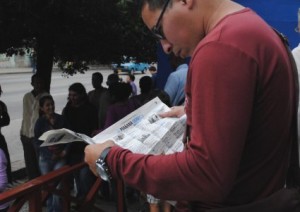 Submarino, which came with the stamp of its director Vinterberg, known for his well-received Celebración, left the audience with a bad taste, despite its hopeful ending.

“It’s too sad what the children of alcoholic’s experience.  Fortunately the situation in Cuba is different”, said a woman dressed in blue, to which a younger guy responded: “The situation of the life of an alcoholic and their relatives has the same color in any country in the world, ma’am.  It doesn’t matter what system they’re in or the level of education of the person.  They gradually waste themselves away and take other people with them.  That’s the reality. 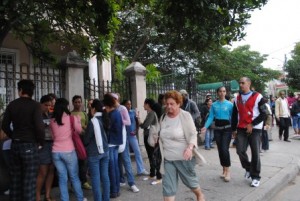 “The movie shows two people from the First World who are suffering the consequences of their mother’s alcoholism.  But in Cuba it’s just as disastrous.  The only thing is that no one’s selling drugs on out on the street corner, but people can get them just the same.  Plus here, rum is sold everywhere, so it’s easy to slip down that same path.  Another road would be to choose a life that moves away from pain, trying to be different from what we find that’s no good, in this case alcohol.  The same thing can happen anywhere.”

Twenty-Third Street is welcoming its cinephile visitors.  You can see them dashing from one extreme of the thoroughfare to the other looking for the best selections while washing down some snack in haste.  Fresh cool December air is good company for the lovers of the seventh art, who spend the whole day enjoying stories, images and music – a good compendium for passing the days and confirming among everyone that the world extends beyond our eyes, our minds and our desires.