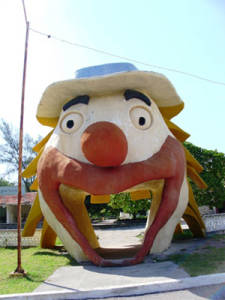 HAVANA TIMES, Jan 6 — In the last hurricane that hit the city and suburbs of Santiago de Cuba — a storm whose name I don’t want to recall — certain areas were left devastated. Fortunately, though, thanks to the early steps taken by the Civil Defense forces, we didn’t suffer any human casualties, only material ones.

Our coastal areas were the ones that suffered the most from the pummeling, and many beaches and facilities for touristic enjoyment ended up in pieces.

The region known as Sigua, located in a large park area in Baconao, has among its charms a beautiful place created for children. It’s called El mundo de la fantasia (the world of fantasy).

The talent of its designers reserved a space there for several celebrities of international literature and film.

The main entrance gate, with its Gothic columns and weathervane, simulates a castle. But once inside, kids can rediscover Snow White and the Seven Dwarfs, the Three Little Pigs, the wolf or Cuban cartoon classics like Captain Plin and Elpidio Valdes. 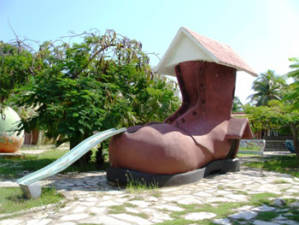 There one can find a stone amphitheater that replicates an imaginary showcase, a track for bicycles, a venue for science fiction characters from the galactic world, various playground areas and a second entrance where youngsters scurry from here to there avoiding the huge mouth of a clown.

All of this wonder was threatened by inclement weather, which did in fact cause certain damage. But the world of fantasy withstood the pounding.

Though some of its personalities were slightly injured, it seems that the dwarfs took care of Snow White and that the brave Elpidio fought the bad weather to keep his hut on the ground and to protect his beloved Maria Silvia.

The restoration didn’t take long. As if conjured up by magic in its stories, this beautiful place is now awaiting visits by children and elderly alike, because the little ones we carry inside our hearts never die.