What do Cubans think about a new leader being designated?

HAVANA TIMES — What do Cubans think might happen on April 19th? Are they worried about Raul Castro leaving office? Do they feel a new president will be able to make any real changes on the island?

I’ve had these questions going around my mind for quite some time now. Every time I go outside and run into somebody, I ask them to hear their response. Until a few days ago, I was very disappointed because nearly noone would answer my questions; not out of fear of reprisals like one might think, but because there were more pressing matters they had to deal with.

People weren’t talking about this in lines, hanging outside the homes or on buses, gauges to know what people think were only showing indifference or ignorance.

Then the State Council has decided to move the beginning of Parliament’s inaugural meeting (a two-day session) up to today April 18th, a good time to tell you the little I was able to gather. These are ordinary Cubans’ opinions, of the people who experience disappointment and joy just as intensely in their everyday lives, not the opinions of political experts, intellectuals or economists.

It’s curious to note that nobody commented on being scared about Raul leaving office, after 60 years of the Castro brothers ruling the lives of every Cuban on this island (for better and for worse). Nobody stressed the fact that Raul will continue at the head of the Communist Party (PCC), which is who dictates how to rule the country in the first place. Furthermore, there wasn’t much optimism or confidence that the situation will take a drastic turn.

Used to the lack of change, many people claim that nothing will happen, “we’ll have the same problems and the same inertia,” Armando, a Physical Education teacher at a primary school, told me. “Nothing gets fixed overnight, so the new president is going to have a hard time.”

Then there are people who claim that “those at the top” are pulling out their hair and banging walls, even though we know nothing about it. Some people think that Diaz-Canel won’t be elected like the majority are speculating and claim that they received this information from a “good source”.

A Ministry of Education employee maintains that “there isn’t any other option, just Diaz-Canel, who they’ve been pointing at for this the whole time; which doesn’t mean it’ll be for the best.  We don’t know him, the only thing he has done until now has been to repeat the same discourse over and over again, he never leaves the script. But, who is he? What does he really think? How will the Cuban people react to him? It’s a mystery.”

On the busy 23rd street, celebrating National Dog Day, an animal rights activist is hopeful; he said that the new President will want to wipe away the stagnant image that surrounds the “old government”. Referring to the need for an Animal Protection Act, he thinks that right now all we need to do is insist tirelessly and maybe we’ll get it passed now.

In a cafe near Boyeros Avenue, a group of old people liven up immediately. “The problem is that whoever comes along (whoever that is) is already at a disadvantage because they haven’t fought for this, they got it handed to them on a plate, without having fired a single shot. And these people, with their flaws, because they have flaws, won this position, they really struggled to get here.” Another man interrupted: “What needs to happen isn’t happening and that’s people voting for the President they want to. Although I have to say one thing, the day people can directly elect the President they want, this is going to be chaos. Because we all know we aren’t ready.”

I leave the old men arguing whether we are political illiterates or not; a good subject, there’s no doubt about that, but it turns into insults and gestures which probably won’t end very well and doesn’t contribute anything to the debate. 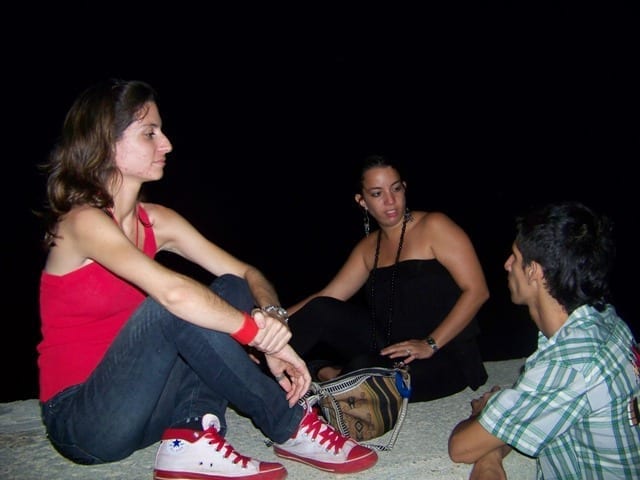 The few teenagers who gave their opinion think that it doesn’t matter who becomes president, the majority are thinking about leaving Cuba at some point. “Is anything going to really change?” A 19-year-old girls asks, who works at a kiosk and hasn’t been following the upcoming appointment of a new president. Her question isn’t ironic and doesn’t have any double meanings, she says it with resignation.

An old man who has given up is a sad sight, but if it’s a young person who isn’t looking towards her future and only survives without thinking about her present, it makes us think we are living in a sick society. Her better phrases were: “I don’t know, are they going to reduce prices? I want to see beautiful places.”

On the other hand, Maritza, the kiosk owner, who was ready to open up her restaurant when Raul Castro suspended new licenses, believes that it’s better for Raul to leave power. “If Raul isn’t going to bring about any real change, it’s best he relaxes and enjoys his great-grandchildren where noone can bother him. A lot of show at the beginning and it’s only been bla bla bla. Wholesale markets never came and I’m still not allowed to import the products I need. Buying everything at the same retail places people go who don’t run a food business, makes us spend too much; that only creates problems. We need a president who really isn’t afraid to open up the economy, to diversify it, this monotony really harms us.”

Everyone also mentioned the subject of low wages, but as a wish, without caring too much whoever makes it a reality.

One thing was made clear to me, the thought of a woman taking over the reigns of this country doesn’t even cross people’s minds, and they don’t see it as something that could happen. First of all, it doesn’t even occur to them and then, when I insist, they can’t think of any women. This isn’t coincidence, although the government has been promoting Mercedes Lopez Asea recently and women make up just over half of the legislators in the National Assembly of People’s Power, but reality is that the aspiring leadership is made up mostly of men.

Miguel lived in Spain for many years and has now returned to the country where he was born. He has a different idea about what is going to happen, he thinks it’s all a big farce. “On the 19th, after making some emotional release, if they can, Parliament members will beg Raul not to leave them, that the people want to continue under his aegis, they will applaud like crazy people and Raul won’t have any other choice but to continue taking on the great mission of leading this country; at the people’s request, of course.”

4 thoughts on “Cuba, Just Hours before a New President”