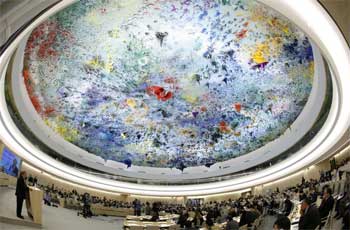 HAVANA TIMES, 23 mar — Human Rights Council made a shift from May 2009 by voting (March 22) to criticize the Sri Lankan government for “not adequately address[ing] serious allegations of violations of international law” when conducting its final phases of war against the liberation guerrilla army LTTE (Liberation Tigers for Tamil Eelam), which ended, May 18, 2009, with government-caused massive blood baths.

The resolution called upon Sri Lanka to implement its own findings and recommendations made in the Lessons Learnt and Reconciliation Commission (LLRC) report, but extended that call to “initiate credible and independent actions to ensure justice, equity, accountability and reconciliation for all Sri Lankans.” (“Independent action” is not defined.)

Furthermore, the resolution with 24 in favor, 15 against and 8 abstentions, “encourages” the Office of the UN High Commissioner for Human Rights to offer the government “advice and technical assistance” in implementing the LLRC recommendations, and to make a report on the provision at the 22nd HRC session, a year from now.

In an earlier draft, Sri Lanka would have had to provide a time table to show implementation was underway. To acquire India’s vote, the final resolution was watered down. No mention of war crimes or crimes against humanity is included; instead, Sri Lanka is asked to investigate   “allegations of extra-judicial killings and enforced disappearances.” (See draft changes: http://www.tamilnet.com/art.html?catid=13&artid=35027)

The resolution implies a lack of confidence in the Sri Lankan government to enact even its own mild investigation, while preventing any discussion of a more solid investigation into allegations of war crimes and crimes against humanity that the “Report of the Secretary-General’s Panel of Experts on Accountability in Sri Lanka” called for last year when it recommended an independent international investigation.

Comparison with May 2009 resolution

The resolution that US allies backed in May 2009 [the US was not on the Council then] also called upon Sri Lanka to investigate itself for possible human rights abuse, while condemning only the LTTE for terrorism and war crimes and other human rights abuses. Even though this resolution only asked the police to investigate themselves, many governments took this as an affront to sovereignty.

Cuba led a counter-resolution, which praised Sri Lanka for its “promotion and protection of human rights”. Cuba extended unconditional support to the brutal government by introducing the resolution prepared by Sri Lanka. 29 countries voted to applaud Sri Lanka and condemn only the LTTE.

Nothing was stated about the suffering of hundreds of thousands of Tamil civilians or the takeover of their homeland. This resolution was opposed by12 votes and there were six abstentions. The pattern was clear then: nearly all the Non-Aligned Movement governments voted with Sri Lanka; the West voted for a possible critique.

This time the geo-political voting pattern was broken, and, coincidently, disproved my prediction that Sri Lanka would come through without a slap on the face.

The changes in voting are interesting (1):

In 2009, all of the African governments on the Council voted fully in favor of Sri Lanka with one abstention. This time the vote was split with five in favor of the possible criticism, three opposed and five abstentions.

The Middle Eastern governments did not change. They all voted not to criticize with one abstention, the same pattern as in 2009.

The countries still on the Council since 2009, which changed their votes from support of Sri Lanka to critique are: Cameroon and Nigeria; India; Uruguay.

The most significant reversal is India, given its several decades’-long-relationship supporting the Island nation so close to it. Although India changed its vote it balanced the change.

“While we subscribe to the broader message of this resolution and the objectives it promotes, we also underline that any assistance from the Office of the High Commissioner on Human Rights or visits of UN Special Procedures should be in consultation with and with the concurrence of the Sri Lankan Government,” read the Indian statement, as reported by Tamilnet.com

Uruguay’s change is also important. Its new president, José Mujica, was a left-wing guerrilla who spent 15 years in prison, two of it at the bottom of a well. He has placed poverty as the first order of business.

Peru was not on the Council in 2009 but its new government with Ollanta Humala as president voted to criticize Sri Lanka. He has also vowed to tackle poverty as his first priority.

The fact that two African governments have reversed their vote and that more NAM governments abstained this time as well may indicate that international agitation has had an effect.

Although it was the greatest terrorist state in the world that introduced the critical resolution, the United States is still a partner in the war crimes and in genocide against Tamils. It always backed Sinhalese chauvinism, discrimination against Tamils, and offered no aid to Tamil civilians. But it sees an opportunity here to polish its image as a “human rights supporter” while maintaining systematic human rights abuse in its many invasions and military interventions in the world.

The current US president is at war in seven countries, all circumscribing United Nations laws against invading countries that have not invaded the propagator of war: Afghanistan, Iraq [tens of thousands of US war mercenaries still occupy Iraq], Pakistan, Somalia, Uganda, Sudan and Libya. Furthermore, without US backing the Palestinian people would have been liberated from Zionist Israel ages ago.

It was China, as well as Russia, Israel and Iran and Pakistan (not exactly blood brothers) that gave and sold more military hardware to Sri Lanka in the last two-three years of war to annihilate the LTTE. The US-UK-NATO offered far less in the latter period given that they were bogged down in the Middle East.

These are some factors in the change:

1. Indian Tamils in Tamil Nadu and Sri Lanka Tamils living in the Diaspora in many countries have, since the end of the war, conducted many protests and lobbied governments for justice. A few Tamils have even committed suicide in despair and in protest.

2. Mainstream Tamil parties in parliament in Tamil Nadu, India, were a major influence in convincing the central government to change its vote from one of applauding Sri Lanka to this critical stance. They had even called upon India “to declare President Mahinda Rajapaksa complicit in genocide and war-crimes and to call for economic sanctions against Sri Lanka till the country ensured equal status to Tamils”.

3. Channel 4 two-part “Killing Field” series. The second one was shown during these sessions and clearly pointed an accusing finger at the Rajapaksa family regime for standing behind horrendous murders, mutilations, rape; in short, war crimes and crimes against humanity.

4. The US is making it clear to Sri Lanka’s government that it is dissatisfied with it even while approving a World Bank loan of $213 million for development in the capital city, Colombo, just a week ago. The US keeps its fingers in the economy while it shows its unhappiness because Rajapaksa is offering more economic concessions to China and Russia. The US has lost its long-hoped for port in Trincomalee harbor, which China will probably acquire. The current president also sees an opportunity to score re-election votes by pointing a finger at a real culprit, just as he sought to do in Libya under false pretenses and as he is trying to do in Syria. Obama, like all presidents for capitalism, seeks oil, profits and domination.

Perhaps nothing substantial for Tamils in Sri Lanka will come out of this Human Rights Geo-Political game, not simply in and of itself. Yet the game’s rules are changed, at least in this area of the world, when so many NAM members have not sided with a fellow member.

Cuba, which started the ALBA coalition with Venezuela in 2004, needs to reflect upon its foreign policy stance and especially in regards to Sri Lanka. It has politically backed Sri Lanka because, in part, they are both members of NAM, and Cuba often acts in a knee jerk manner when the US criticizes third world countries—understandably.

Yet Cuba goes overboard in backing this most ruthless Sri Lankan regime responsible for scores of thousands of civilian deaths, incarcerating hundreds of thousands without due process, taking over Tamil homes and businesses, places of worship and building hotels upon Tamil graveyards.

Cuba’s has acted immorally, and in contradiction to its long-time solidarity with the oppressed and exploited peoples of the world.

The evidence of war crimes, crimes against human, and even genocide, is much too vivid due to testimonies of victims, satellite photos and the excellent Channel 4 documentaries with photos and videos taken by UN aid workers, some by victims or by Sri Lankan murdering soldiers and then sold or otherwise released to the public.

If Tamils in India and in the Diaspora keep up the pressure, if left organizations, grass roots groups, representatives of other oppressed peoples seeking liberation (such as Palestinians, Kurds in Turkey, Basques, Irish…) would join in united fronts for liberation for one and all, then we might be able to bring some real hope for Tamils in Sri Lanka.

Be not fooled: The US does not want true accountability, or a Tamil Eelam homeland for the oppressed minority, but the spotlight is turned on and peoples’ power could stoke the light bringing, at least, relief to the down-trodden Tamil people.