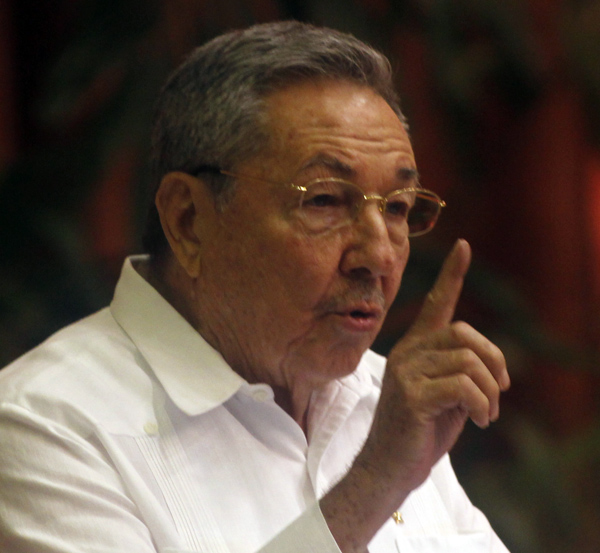 HAVANA TIMES, June 3 (IPS) — President Raul Castro, who turned 80 Friday, is facing the challenge of making the Cuban economy more efficient without abandoning socialism – a course that involves overcoming conservative resistance to change and new forms of working and even thinking.

“We have to take care of him; only he can set the reforms in motion,” one academic confided to IPS. The president himself has admitted that time is a factor against him. But he seems to feel healthy and completely at ease with his responsibilities in leading the country, which he describes as his “last task.”

The day before his birthday, the president received a visit from former Brazilian President Luiz Inacio Lula da Silva (2003-2011), and the two reviewed progress of a project to expand and modernise the port of Mariel, about 45 kilometres west of Havana.
The project, with Brazilian financing, will make it possible for 15-metre draft ships to dock in the port terminal and further open “Cuba’s doors to the world,” Cuban press reports commented. The port is part of a strategic development zone to be established over the next five years.

According to academic circles, the Brazilian investment now totals some 300 million dollars. The Mariel plans include the construction of roads and modern rail lines, in addition to the remodelling of a polytechnic institute for training young people in the skills needed for the new jobs in the area.

Mariel and the Cienfuegos petrochemical complex, which has heavy financial backing from China, are two mainstays of development that are being followed very closely by Castro, and whose success depends on the impact of structural reforms on the efficiency of the state business system, charged with making government projects operational.

In bidding farewell to da Silva on Thursday, Castro announced that he would celebrate his birthday “only with my grandchildren” and one or two of his daughters. In his marriage with prominent women’s rights advocate Vilma Espín, who died in June 2007, Castro had three daughters and a son. Next to his lifelong companion’s gravestone, another has been placed, with his own name and year of birth (1931-).

He joked about not being able to retire

The Cuban president seemed to be in a good mood, joking about his age and saying it was a “shame” that he could not retire “already,” referring to an initiative in the Sixth Congress of the Communist Party of Cuba (PCC) for a term limit of two consecutive terms for top political and state posts.

“Well, I have two terms, I’ll try to complete one,” commented Castro, who was elected president of the Council of State in 2008. The post had been left vacant by his older brother, Fidel, after he fell seriously ill in 2006. Since the PCC congress in April, Raúl Castro is also the first secretary of the Central Committee of the party.

The term-limit initiative, in addition to many other reforms contained in the economic and social policy guidelines, the name given to the five-year – the time between party congresses – programme approved by the party congress, is awaiting the passage of laws in order to be formally implemented.

“There are so many things that must be fixed in legal terms,” Castro commented in brief statements to journalists. For that purpose, Justice Minister María Esther Reus is devoting herself entirely to reviewing the laws, he added. “There are thousands that have to be fixed, in an organised manner,” he said.

“Many things that are in place are absurd, or were correct in the beginning, but time has passed,” said Castro, who announced on Jul. 26, 2007 that all structural and conceptual changes needed to make the land produce more would be made.

Although he was referring to the depressed agricultural sector and the need to bolster food production to reduce the country’s heavy dependence on costly imports, Castro’s 2007 remarks marked the start of a process that involved mass debates on the problems faced in Cuba and the desire for change of the Cuban people.

The outcome of the discussions served as the basis for the draft guidelines that were taken to the PCC’s Sixth Congress after they were discussed in neighbourhood and workplace meetings. At the same time, a number of measures and resolutions began to respond to certain demands, while others still await legislation to regulate their implementation.

Decisions to open up tourist hotels to Cubans and make mobile phones and computers widely accessible to the local population were followed, in 2008, by a decree for the distribution of unproductive government land to private farmers.

One million hectares have been distributed to date, and a further 800,000 are ready to be handed over, according to the Agriculture Ministry. But of the total handed over, only 70 percent is being farmed. According to researchers, the decree needs adjustments to encourage agricultural work.

In the first quarter of this year, about 300,000 people moved from the state sector to the private sector, in light of the expansion of self-employment to 178 trades and activities and the drastic reduction of the state payroll. Authorities hope to encourage more people to join the self-employment sector, with rules that ease the tax burden.

However, analysts point out that the list of authorised occupations includes only two or three specific activities for skilled professionals, thus ruling out the contributions that people with higher education could make and closing the doors to their participation in economic and technological innovations.

Expectations are now focused on the implementation of an announced credit policy, which will include loans for farmers to buy work supplies and tools in retail stores, and for self-employed workers.

The most eagerly awaited laws include those for regulating the buying and selling of vehicles and homes, which will now be allowed, and rules for setting up cooperatives in areas other than agriculture, the only sector where they have been permitted until now.

Embarking on the preparations for a National Conference set for Jan. 28, 2012, Castro urged PCC members to change their “mentality, which like a psychological barrier” is hardest to overcome, “because it has been tied for many years to the same obsolete dogmas and ideas.”