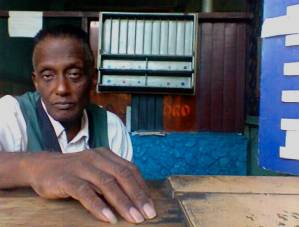 HAVANA TIMES — I invite you to take trip with me to the Kingdom of the No. An attentive gaze, some notes and several photos are enough to confirm the persistent obstacles that people run into when dealing with service providers supposedly created to make their lives easier. The first thing that strikes the eye are the chronic shortages experienced in the Cuban capital, a fact that the official press avoids while government authorities try to conceal or at least downplay it.

In the morning, we were at Cuatro Caminos, an area at the intersection of several municipalities with a high population density, where mostly low-income people live (Centro Habana, Old Havana, Cerro, Diez de Octubre). The pictures speak for themselves. 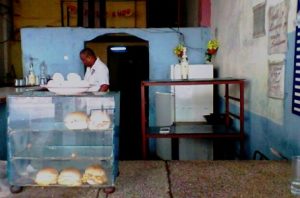 To the right and behind the clerk, an empty shelf awaits cigarrette packs, while the employee has nothing to do. There are simply no products to sell!

To see whether this is an exception, we head up the street from the intersection of Belascoain and Monte, until we reach Matadero. There, other clerks desirous of selling something (and avoid the boredom of the previous clerk) await us.

They were selling buns with something inside (omelets, in fact, which the furtive photo does not clearly show). On the counter, there was only a small calculator and a bottle of rum, which looks more like decoration than something on sale. 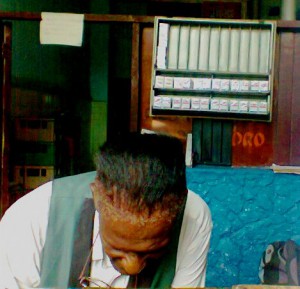 A sign at the back reads “Happy New Year”. It’s unclear whether it refers to the next, the current or previous year. It may be announcing the promised joy of a prosperous and sustainable form of socialism. The sign has been hung on the wall for who knows how long.

Managing poverty, however, is an art that Cuba’s governing bureaucracy has mastered. The next day offers us a different picture, as “one or two cigarette cartons come in from time to time”, I hear a waiter say, warning his friends: “they don’t last long. People are very anxious and buy things en masse.”

A slightly different scenario awaits us the following day:

At least there are cigarettes and the clerk has something to do. It is well worth recalling that, according to statistics that one can see on any bulletin board posted at a food industry locale in Havana, the sale of cigarettes, cigars and alcoholic beverages account for nearly 90 percent of an establishment’s sales plan. 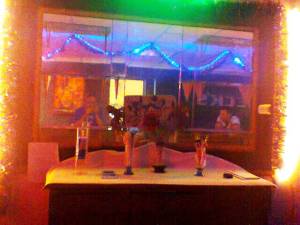 Incidentally, the chain of State stores for the poor are completely out of cigars, as these are hoarded immediately, bought in 25-unit packages (1 peso per cigar), to be re-sold at around twice the price set by the State monopoly.

It’s time for a rest. We arrived at one of the few Cuban peso restaurants with air conditioning in the area. The table beyond the counter should offer us a variety of products, but there isn’t much to be done here either, save look at ourselves in the mirror above the counter, after musing on “life’s many blows”, as the poet said.

Roque Dalton, the revolutionary Salvadoran poet, never lived long enough to see a country experience a decades-long rule by the communists. I can just picture how shaken up he would be, and the other magnificent poem he would write, if he were to visit Cuba from El Salvador and stand next to the post office located on Belascoain and Carlos III.

Outside, we read about the modern communications systems inside: email, fax, DHL (leading courier in the world), photocopies, etc.

I don’t think the woman in the picture believes the pretty ad. Perhaps she is waiting for her turn, to collect a wire or something along those lines, always within that limited time of the day, because the place isn’t open 24 hours – it closes in the early afternoon, without even guaranteeing the delivery of urgent telegrams.

The worst “no” is still to come. Sometimes, even though the products or services are available, you can run into surprising obstacles. 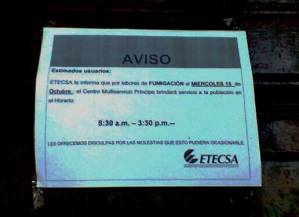 You see the sign in most public offices around the country: “Closed for Fumigation,” a procedure aimed at combating the spread of several contagious diseases typical of the tropics and which gets in the way of regular working hours. In this particular case, it’ll be three and a half hours less work for the pleased employees.

These obstacles have no recognizable pattern. They arise without a previous plan. There may have been a previous announcement, but customers are not sight-seers and often find out at the entrance to the establishment.

The “no” has been with us for nearly 50 years. We run into it constantly, at intervals. We are so well trained in the art of survival that we manage to regain our strength between crises, such that, though we are unable to properly diagnose the disease, we are ultimately able to live with it. We feel we face a chronic condition we cannot overcome.

Returning to the poets and recalling the singer-songwriter who was a friend of Dalton’s, Silvio Rodriguez, someone who seems to be a little taken aback by reality today, I say: “what a way of knowing that this is the same old story.”
—–
[email protected]