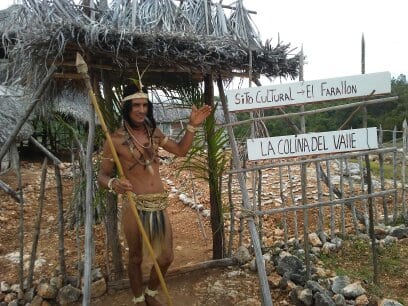 HAVANA TIMES – “It all started off as a game,” young Fermin Olivero Barcena told me the day I met him, in early July. I must admit that when I climbed the hills to see his personal cultural project, I didn’t have a lot of faith. People were telling me about an Indian who was living in a cave and I imagined someone who had lost half their mind, looking for an escape. But, that wasn’t the case.

Covered in sweat and almost out of breath, I reached the hill where he had established himself with his “Cacique Mayari” character, and I couldn’t do anything but join the two groups of visitors (half a dozen in each) that he was already seeing.

He had just explained the project to them and had shown his museum of rare rocks which he collects in nearby caves and I assume these have archaeological value. Then we went with him to the caves, along wide paths that he keeps clean and with rustic benches he built to sit down and rest, until we finally reached the most prominent tree in that entire elevation, where he had built a rustic viewpoint.

It was very exciting. However, the feeling that he stirred in people was what I liked the most, making people want to come back, to celebrate their birthday, won over by the charm of that place. It was nice to see people taking an interest in indigenous culture, in a natural lifestyle and in the beauty of our Nature. Obviously, “the Indian’s project” (as people refer to it) interests people a lot.

As I was leaving, more young people came to visit, and he went up to see them without thinking twice. Barefoot on the rocks heated by the midday sun, without charging anything and accepting some voluntary cash donations after people insist a great deal, afraid though because he doesn’t have authorization to have this project or to charge visitors for his demanding work.

He told everyone his story, how the idea slowly came to him bit by bit and finally about his fear of having to destroy it. At the end, I asked him his permission to be able to write about his story and publish it. He agreed, he needed the publicity, “to save the project because they want to destroy it,” he said. A month before, an inspector from Physical Planning had given him a month’s time to dismantle the buildings he had made out of royal palm fibers, palm leaves and lianas.

He had gone to the Municipal Culture office and has managed to bring its officials to the mountains in a car that neighbors had helped him out with. They loved it and promised to help, but nothing got sorted out. He went to the local cooperative and the President (who is facing corruption charges) refused to help. The President of the People’s Council promised to help him but bureaucratic hurdles hindered any solution. 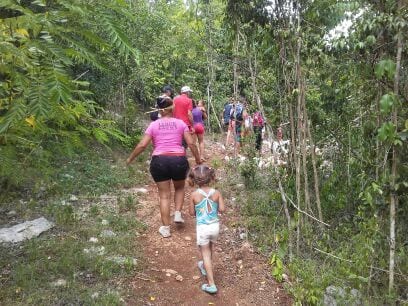 I published the first article about it on Diario de Cuba that same month, in July. A month later, I returned with my wife, so she could see it before they destroyed it, which I assumed would happen. I found him desperate and anxious. Inspectors from Physical Planning had come back like they had promised, and they given him a 900-peso fine, with the order to demolish it. He had gone everywhere and he couldn’t find any answers, only redtape.

Reluctant to destroy his work, at least if there were a solution which meant doing this, he got stuck in his helplessness. Terrible ideas floated around his stressed mind. I advised him to insist on seeing the President of the People’s Power, as a last resort. I don’t know him myself, but I have friends who do, and I know that he isn’t a bad person.

I explained to him how our political system works more or less and why leaders have no obligation to resolve the population’s problems or to do what people want, because it isn’t the people who elect them or evaluate their work or promote them, the Party does this instead. However, once those huge barriers placed between a citizen and these authorities are surpassed, if you are able to make them aware of the problem as human beings, they might help out when it matters.

And that’s what happened. After many days without any results, when he was about to give up because of so much waiting about without any results hurt his dignity, he could finally see the President and the latter promised to help him.

After this promise was made, a solution had finally come to light and Cacique Mayari was able to save his project. He will have to take down his rustic constructions on the hill and move them a kilometer away, to the surrounding areas of Seboruco Cave, a place of great archaeologic value as it is a national monument (in 1948, Nunez Jimenez found the oldest remains of the island’s inhabitants there). 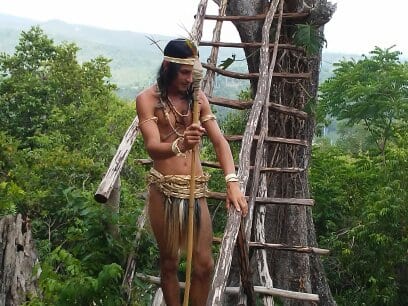 Let’s hope that this solution has a happy ending and that no more obstacles pop up along the way. It will be an even better settlement than the previous one, not only because of what I have already explained, but also because it is a lot more accessible to the public, and it is surrounded by a stream which swimmers come to visit in summer and visitors who camp, because of the cave’s appeal.

It’s worth pointing out that the solution couldn’t come about in the most logical way, via the Municipal Culture office, the Cooperative, the People’s Council or a mechanism that would allow Fermin to legalize his work as an independent venture. He had to move hearts and wills by informal means.

Let’s also recognize the role that the timely and much-needed dissemination of his story in independent media had, which helped to give the case visibility, because the municipal radio station Radio Mayari” and the Tele-Center “Tele Cristal” pretended to not know about the case, incredibly enough. Even if the city were burning down, they wouldn’t cover it unless they had an explicit order from the Party and MININT. Who still doubts the importance of a free, independent press?

The Cacique, his neighbors and all of us who have heard the good news, are extremely happy. This young man’s perseverance is a great victory. “I am grateful to everyone who helped to bring about this solution,” he told me amid tears of happiness. “Even my hair was beginning to fall out because of stress and helplessness, and an Indian without long hair isn’t a real Indian!” he smiled. I’m glad! Finally, young Fermin can smile.