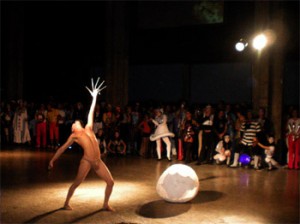 HAVANA TIMES, Oct. 31 — The International Theater Festival of Havana began last week at the Cuba Pavilion as a huge fiesta.  Fireworks were even launched on opening night for a euphoric crowd made up mostly of young people.

This is the 14th edition of this type of festival, which every other year is anxiously awaited for by those who appreciate the dramatic arts in Cuba.  On this occasion the event is being attended by artists from 17 countries who form 32 troupes.  For its part, our national participation includes 34 acting groups and 36 productions, mostly those released within the last two years across the country.

The opening of the festival at Pabellón Cuba was an interactive collage.  Several Cuban theater companies — not to mention pantomime, puppetry or circus artists — gave color to the moment, which was also attended by Abel Prieto, Cuba’s minister of Culture. 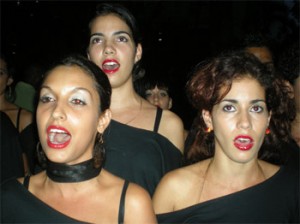 One surprise was seeing the dancing Afro-Cuban Abakua devils (called “irem”) at the entrance of the centrally located event on 23rd Street in the downtown Vedado district.  Perhaps they were there because of this being the UN-designated “Year of Peoples of African Descent,” but for whatever the reason it was significant that it occurred.

The festival’s artistic director, Barbara Rivero, said “In Havana an urgent call has been sounded for theater in the sense of dialogue and reflection on the major challenges facing humanity today, such as violence, hunger, unemployment, ecological disasters and the need for peace.”

This need for sharing, for people coming together in dialogue, discussion and renewal, seems to have been internalized by the Cuban playwrights. 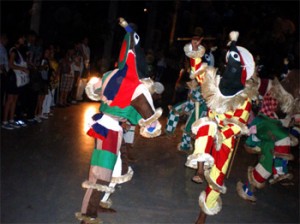 Among the many programs, one deserving highlighting is the US company the Broadway Ambassadors, directed by Bob Nederlander.  The company is presenting a show that stages the most popular songs performed from the 1950s in that the famous New York musical circuit.

The performances will be on November 3, 4 and 5 in the Garcia Lorca Hall of the Gran Teatro of Havana”.

As is becoming usual on the island, despite existing economic constraints, events of this magnitude larger are attempting to impact the greatest number of people, which is why they take place not only in Havana but also in other provinces.  This time the fortunate provinces will be Matanzas, Cienfuegos and Villa Clara, cities with rich cultural lives.

The inauguration evening ended with a big disco and fireworks to the delight of the young people present.  However, the festival is also presenting theoretical events, workshops, exhibitions and audio-visual displays.

The Havana Theater Festival will conclude on November 6 with the works “Bodas de sangre” and “Suite Flamenca,” both by the Antonio Gades’ Ballet in Havana’s Gran Teatro.