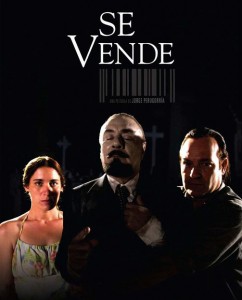 HAVANA TIMES — For Sale (Se Vende), a newly-released Cuban film directed by established actor/director Jorge Perugorría, has the interesting logline: “When death becomes a pretext to talk about life”.

The film stars Daylenis Fuentes as Nácar and Perugorría as Noel. Martha Ibarra (the mother), Mario Balmaseda (the father) and Yuliet Cruz (the friend) comprise the talented supporting cast.

The film, as many before it, parodies the daily life of Cubans, where making ends meet entails all manner of absurdly creative maneuvers.  Nácar, who visits her parents’ tomb every day, converses with her dead mother’s spirit and has a revelation that will soon become a dilemma: the need to sell the family mausoleum.

“If the dead must be sacrificed so that the living may have something to eat, then burn us corpses here and sell the crypt”, the spirit of the dead mother argues, seeking to help her daughter financially.

In the 70s, the mother had sold the beach house she had inherited from her grandparents when they left the country. In the 80s, she had persuaded her husband to exchange jewelry passed down by the family for Cuban hard currency, at the then renowned House of Gold and Silver.

During the economic crisis of the 1990s, widowed, she had moved from her larger Vedado home to a house in Old Havana, using the money she received in the transaction to survive through the decade. Now, well into the 2000s, she can only help her daughter by suggesting she sell her tomb.

At her friend’s relentless insistence and with the help of Noel, a struggling visual artist who sells books in Havana’s Plaza de Armas Square and with whom she has an amorous relationship, Nácar decides to do so.

However, at the cemetery, Nácar is told that the exhumation and cremation of bodies must be requested with one year’s notice. Faced with such a prohibitive delay, what could she do? Nácar’s friend says that, in addition to the mausoleum, she can sell the corpses inside, and actually make a bit more money in the process.

After bribing some gravediggers at the cemetery to exhume the remains, they discover that two of corpses have already been stolen. Luckily, the parents’ corpses are still there. But the father’s cadaver has become mummified (its body is fully preserved, perhaps owing to the excessive amounts of medication he consumed while alive).

The corpses are taken home. After posting an ad on an online classifieds page, the protagonists begin to receive hundreds of people who are interested in purchasing the bony remains of Nácar’s parents. A scientist is interested in the skeletons for a lecture. An actor wishes to use the skull as a prop for a rendition of Hamlet. Many others do not clarify their interest in the cadavers.

After the mother’s skeleton has been sold, the mummified corpse of the father is used by Noel in a visual arts exhibition. The corpse, encased in a coffin and bearing a striking resemblance to Lenin, makes one of the arts enthusiasts present exclaim: “He has brought Socialist Realism back!”

An absurd comedy, a painful depiction of contemporary Cuba, painted with strokes of sarcasm and humor. Nácar dreams she is being buried alive and that no one can hear her screams. The camera frames the sign posted outside her grave. It reads: “For sale”.

One thought on “Cuba/Cinema: “For Sale””