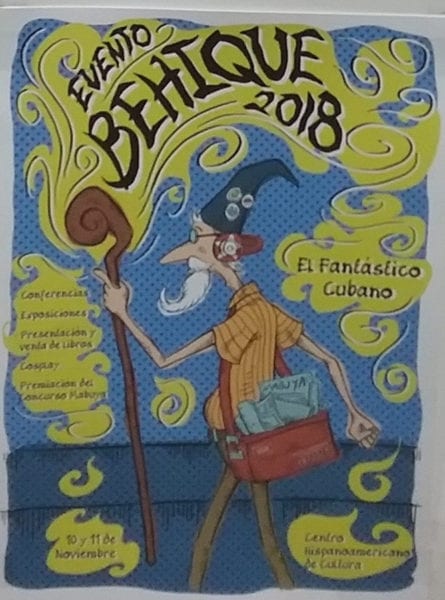 HAVANA TIMES — The Dialfa project celebrated its 10th anniversary in full swing on Friday December 1st in the Hispanic-American Culture Center located in a beautiful building with views of the Havana Malecon.

It was proven that you can break the reduced concept of Cuban institutions, the “damn situation of water everywhere”, look the world in the eye and create events with their own identity, like a speaker said referring to the doom that the cartoon strip lives in Cuba.

According to Sheila Padron, the event’s main organizer:

“Dialfa was born in 2007. In the beginning, it was a club of friends who loved fantasy that led to a project to promote fantasy art and literature.

“We have a fixed space at the Ruben Martinez Villena library, where we hold the Behique event every month with conferences, book presentations, and this party once a year for literature, cartoons, drawings, Cuban animations, videogames and everything relating to pop culture.”

It’s a way of decriminalizing the foreignism that these genres are accused of and the reproach that they don’t create independent values, or isn’t it?

“As a result of globalization, it’s inevitable that so many works within this literary genre, such as the already classic “Harry Potter” or “Lord of the Rings”, find us. And just like there are people who like sport, or Korean novels, we like this subject. However, our artists also draw, paint and write. And these works become Cuban because they are made by Cuban artists. And we promote them. We have the Juracan Award, which is given to the best book read in a certain year. Do you know how hard it is for young people to read? Well, we encourage them to read so they can then go and vote for the one they liked the best,”  said Sheila Padron.

Do you hold literary workshops?

“We would like to, but organizing them requires a great deal of effort, time… it is something we definitely hope to do in the future. We promote others who hold workshops. We have competitions, we honor those in Cuban culture who have promoted and disseminate these genres.”

Is there a way for young people who live outside the city center to find out about the Behique event? 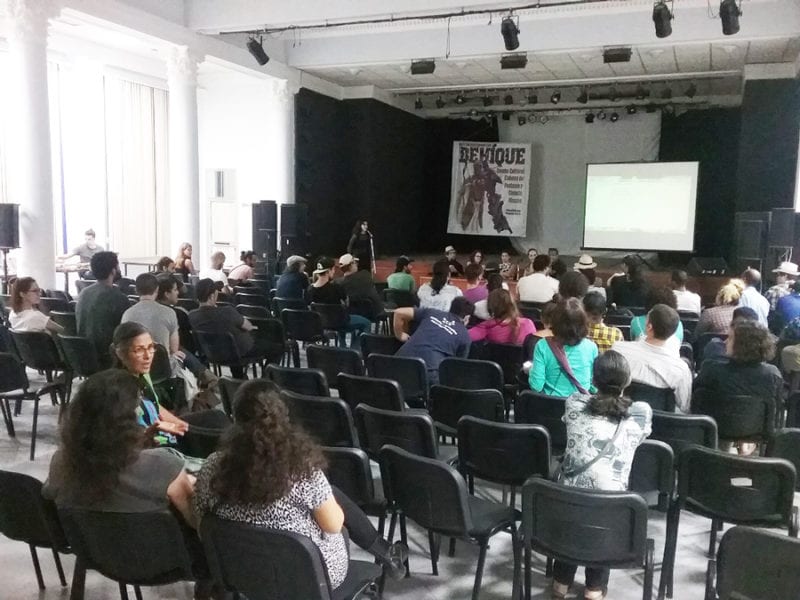 “We don’t have many means to promote the event because we work with our own resources, our only supporter is the Hispano-American Culture Center who gives us their space. We are an independent project. Every one of us has their own job, I am a biochemist, the other person is a lawyer, another one is an I.T. engineer… It’s a great deal of work for us to organize all of this because we do it out of our love for this art, we don’t receive a single cent, just the support of professionals within this area,” explained Padron.

According to Miguel Bonera, an assistant researcher and museum professional, heroes in Cuban cartoon strips were guerrilla fighters, heroic indigenous figures, “no witch doctors”. He told me about how a strip cartoonist was asked to alter the Cinderella story, “taking the fairy out of the story, which is like making a Spanish omelette without eggs. We are a magic Island without magical cartoon strips,” he concluded.

However, the book presentation of books “Las arenas de Eref” and “Remedio divino”, by Denis Mourdoch and Alejandro Martin Rojas respectively, published by the Gente Nueva Editorial, is an example that magic isn’t imported, but shared.

The digital magazine about cartoon strips APULPSO, an independent project like Dialfa, has taken over the young Cuban scene using the trending platform of the moment: the internet. The magazine’s name refers to the instrument created by man to observe outer space. Apulpso is the intermediary between the star and the lens. Maybe even between objective and subjective realities, between science and dreams.

These sincere cartoon strip fans decided to take this brushed-aside genre out of the closet. Without waiting for the right conditions (which never come), they created a world that so many young people discover when they flick through a comic, drawings that barely ever see the light of day. The magazine aspires to create a platform for these anonymous creators, “to make alliances without hegemony, to read without self-satisfaction, for editions that cause controversy, provoke thought and heal old wounds can be made.”

To my question of whether content is censored in any way, the answer was: “there is always censorship and the politics of publishing houses that we have outlined is that you can’t offend any public figure, you can’t use curse words and subjects that deal with pornography. That’s it. Everything else is free.”

Apulpso can be seen in the Weekly Package, in the national magazines section or it can be downloaded from its website: www.apulpso.com 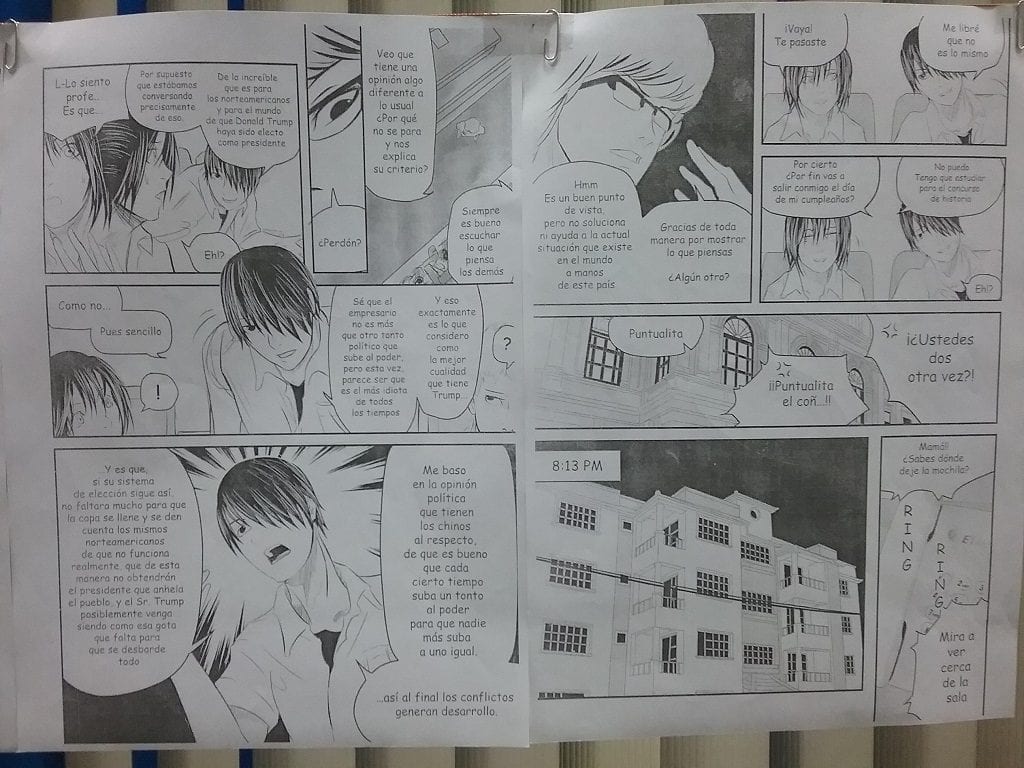 In their challenge to try and define how difficult it has been to make animations in Cuba, especially creative animations, the presenters said that there was a joke that went round between them: “to get into cartoons, you need a psychiatric file.” The young Antonio Enrique Gomez described Cuban cartoons as a genre that is characterized by its use of flyers and music.

The latter which has become dull in official cartoons, gains new life in Equipo 009. Created by Lazaro Pinol, a “non-academic but Freelance” musician, who works from the heart, which is what we wanted,” music is an undeniable protagonist and it contributes to its effective dynamism. “The purpose of the series is to entertain before anything else, and to transmit values through this entertainment. However, the priority is that children enjoy themselves and see themselves in the characters.”

Considered “transmedia”, that is to say a package that allows a national product to be seen on different platforms, the series has already been made into a videogame and thanks to the Caracol chain, pullovers, backpacks, lunch boxes and school books all have their designs. The Havana channel gave the production team nine commercials to make.

Maybe, and not without irony, the best praise given by the child audience is summarized in the fact that the cartoon “seems Yankee”, which doesn’t only mean made in the US but anywhere other than Cuba.

With these claps of thunder, there is more than enough evidence that Behique, a priest and healer in Taino culture, has shaken off his unjust omission from history to cure us of scientific blindness. Of the cowardice to reject, in the words of the great poet Rainer Maria Rilke, “the most strange, wonderful and inexplicable, all of these things that are so closely linked to us…”

Every generation demands what belongs to them. And today’s generation, like an exponent said, decided “to not wait, to do, to be an active agent in changing reality,” founding a fair, authentic and independent space for our Island’s magic.