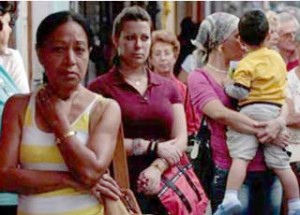 HAVANA TIMES — Regardless of where they live or what ideology they subscribe to, many Cuban women shoulder a heavy burden of responsibility and work owing to the island’s widespread poverty, the difficulties involved in leaving the country and settling on foreign soil and the deeply-rooted male chauvinism of contemporary Cuban society.

Cuba endures the dysfunctional situation of having many single-mother families with fathers who are either absent or unreliable, where grandmothers, mothers and daughters have been responsible for maintaining the little ones and keeping the onslaught of poverty at bay.

Among Cuban émigrés – particularly those who left Cuba as a result of the economic crisis of the 1990s, a crisis which persists in many ways – many women have had to shoulder the responsibility and the burden of supporting their closest relatives and helping their relatives on the island financially, where possible.

Though there are no official statistics on this, finding and securing a job that affords good income, stability and wellbeing has been an upward climb for most men who have emigrated from Cuba; women, many of them without papers, have instead worked as maids, waitresses and nurses for the elderly and the chronically ill at hospitals ad homes, while all the while caring for their husbands and children, if they have these.

Cuba’s so-called jineteras (prostitutes), condemned by much of the island’s hypocritical society (at home and abroad), have not only been forced to become their family’s main source of income – some of them have had to do this at an age when many girls are dreaming of owning a pretty doll or finding prince charming.

What’s more, many Cuban women who have left the country by marrying a foreigner (for convenience’s sake and not), have had to endure the changes involved in adapting to the norms and customs of a radically different society and even a fair degree of discrimination and mistreatment from their husband’s close relatives and friends.

For years, the Castro regime has played the macabre game of conveying the image of a happy, sensual, unprejudiced island, launching tourism campaigns showing rum, mulatto women, maracas and other things that exist only in these advertisements.

As a result of these misleading images, no few Cuban women have had to suffer and deal with offensive sexual remarks, coming from nasty types who don’t even dare say anything to women in their own countries and regularly seek out prostitutes.

Many Cuban women who are living abroad and do not fit the pre-fabricated image of Cuba that many foreigners have been fed smilingly tell of the confused look many of these ignorant people get when they tell them they are Cuban. In some cases, this is met with a common, stupid question: “But, are you a Cuban from Cuba?”

This can help us grasp the injustice and suffering many Cuban mulatto and black women have suffered during these years of hunger, lack of freedom and plundering by foreign men. In certain circles in Spain, for instance, it’s common to hear men say they prefer foreign women because they are “more submissive” than Spanish ones.

Their plight, in addition to being unjust and typical of a male-chauvinistic society, has much to do with the new vanguard role that women in free and developed societies are playing, inverting traditional roles and intimidating many men – more so than any real passion for foreign women, whom they look down on because they earn less than they do, and consider helpless, because they are far away from home.

When time passes and passions cool off, Cuba will have to pay due tribute to its women, no matter what their political stances or geographic locations are. This tribute would have to include the island’s jineteras and those who married foreigners to try and offer their families a better life (though many have achieved this, not that way, but through their talents and skills).

A systemic economic crisis like Cuba’s leads to poverty and marginalization. This crisis has been particularly tough on women, who have rolled up their sleeves and faced up to adversity with more determination than many men.

For instance, a woman who supports the Castro regime still has to shoulder the responsibility of looking after her family and devoting special attention to her children and grandchildren. Some are widows or have been alone for years, because their husbands, who are also supporters of the Castro regime, left them and started a new family, left the country or lost themselves in alcohol and other vices.

A structural crisis such as the one endured by capitalism owing to the unjust excesses of the financial oligarchy generates more poverty and inequality, hitting immigrant workers (and especially women) most of all.

There are of course exceptions everywhere. There are marriages and couples who have worked together to face up to the adversity of living in an impoverished Cuba, marked by emigration, misunderstanding, and who have been happy to be able to help their fathers, mothers, grandparents and the children they had in earlier relationships. This, however, has not freed women from specific burdens that men do not have to shoulder.

Needless to say, the official discourse and rose-colored tall-tales heard on Women’s Day in Cuba and other places around the world will omit the injustices that many women still endure – in many cases, these women will be considered satisfied, because these countries meet certain precepts advanced by the United Nations and other international entities.

Many years ago, humanity discovered that statistics can be used to prove one thing and its exact opposite. As such, the problem has nothing to do with conventions and treaties, but with something as simple as acknowledging the inequality of men and women, an inequality that always works against women. Changing this would need nothing less than a revolution and, regrettably, the times are not ripe for one.

2 thoughts on “Cuban Women between Poverty and Emigration”