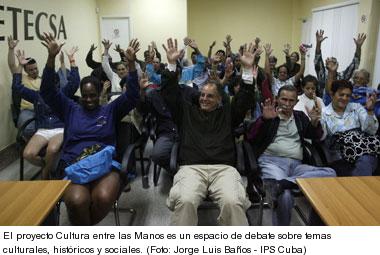 HAVANA TIMES, April 2 (IPS) – A unique program born at a radio station in the historic Old Havana district puts the valuable patrimony of that rejuvenated neighborhood —the oldest in the Cuban capital— within the reach of people who are deaf.

“Havana Radio is a public radio station that has the purpose of communicating the historical-cultural resources in Old Havana.  The non-hearing sector of the population used to visit our community and walk through these streets, but they remained outside of our preservation work. That’s why the project “Cultura entre las Manos” (Culture in One’s Hands) was born,” said project coordinator Yalena Gispert.

The idea started in early 2008 as part of “Rutas y Andares” (Routes and Passages), a program for Cuban families during the summer vacation period.  Tours were guided by specialists through and around several areas of historical and cultural interest in Old Havana.

“A Cuban sign language interpreter took responsibility for translating the explanations about the sites visited; we realized that it was necessary to do something special for the deaf.  From the very beginning they exhibited a great deal interest and posed lots of questions, but the pace of the interpretation slowed down the tours,” Gispert explained.

This was how “Culture in One’s Hands” was born. Every month it offers historical tours, in addition to settings for discussions on cultural, historical and social issues with specialized interpretation services and the participation of specialists in the related fields.

“I’m thrilled with this idea, and I don’t miss any of the sessions.  The visits and themes treated include us in the very life of the country,” stressed Roberto Mesa, who signed his responses with his hands as these were translated by coordinator Carmen Salgado, who has a degree in sign language interpretation.

“I’m the son of a literature teacher, I read a lot.  But “Culture in One’s Hands” is something for us; it was created specifically for people who are deaf.  There’s always a person who interprets. You have to realize that there are also issues of society that are of interest to us,” added Mesa, a 45-year-old graphic designer and father of two adolescent children who do not have auditory problems.

The history of hurricanes in Cuba, archaeology, the global crisis and its consequences, clothing of different epochs, monuments, economics, society and politics in China, the past and present of telecommunications and stamp collecting are some of the issues that have been discussed.

According to Gispert, these issues are proposed by the community, which is organized into the National Association of the Deaf in Cuba.  It, along with the University of Havana, is the sponsor of “Culture in One’s Hands.”

The project includes courses for beginners in Cuban sign language, as well as one produced by Havana Radio on the application of hidden sub-titles in audiovisual materials for the Internet. Havana Radio, given its historical-cultural aim, supplements information that is sought to facilitate for deaf people.

Havana Radio is the radio station of the Office of the Historian of the City of Havana, the entity responsible for the restoration and transformation of the old neighborhood.

Another purpose of the project is to develop communications aids in Cuban sign language, primarily in the form of visual elements for schools and university programs in interpretation as a contribution to its development and to linguistic research.

Sign language is based on the use of the hands, face, eyes and mouth, among other parts of the body, to fulfill the same functions as spoken language.  Each country has its own sign language, although the International Sign System also exists.

Signing is the first form of communication for people who cannot hear.  The learning of their maternal language comes later, and an attempt is made so they can at least manage communication with it in its written form.

In Cuba, the majority of deaf people are literate.  In 1994 Cuban sign language began to be applied in instruction in specialized schools.

The initiative of Havana Radio contributes to the development of sign language with specific purposes. Based on interpretation, the participants can form concepts about heritage, certain techniques or pictorial arts. The tour is like a class and on occasions those involved have to come to a consensus in naming something when a sign for it doesn’t exist.

The National Association of Deaf, which has more than 20,000 members with hearing challenges or who are deaf and blind, has among its other purposes the integration of people into society “with equality of rights and duties, conditions and opportunities.”

The organization also serves to eliminate communication barriers that impede or limit normal lives for people with hearing problems.

Havana Times translation of the original in Spanish from IPS.