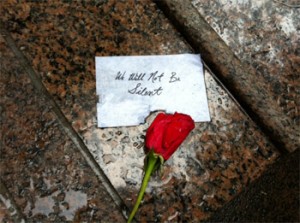 HAVANA TIMES, 21 sep. – The peaceful occupation of Wall St. was violently repressed during the fourth day of protest.

On Tuesday morning demonstrators woke up to discover that it had begun to rain, consequently they used plastic to protect their sound equipment. Falsely claiming that the use of this type of protection constituted a violation of the law (the use of “tents” in public places in the city is illegal), the police attacked one demonstrator, dragging him by the neck of his T-shirt; they then arrested four other demonstrators.

One of the demonstrators lost a tooth and another had an asthma attack (this individual, according to several demonstrators interviewed, had to spend a night in a local hospital). The peace that had been created in “Liberty Plaza” was unnecessarily violated by the police.

Tuesday’s events revealed that the New York Police Department is willing and ready to deploy force to assure that the normal operations of Wall St. do not continue to be interrupted by the songs and messages of this group.

At 7:00 on Tuesday evening a general assembly was organized in which one demonstrator stated that the police violence “tore at our spirits, but it wasn’t able to conquer them.”

Messages aimed at uplifting the morale of the group were plentiful last night. A working group celebrated having secured enough blankets to protect the demonstrators from the night cold, while another individual declared that we had received the support of the 300 members of the Middle East Support Network, which is currently before the UN supporting the proposal for a Palestinian state.

Concern also exists for the health of the demonstrators since they have been exposed at high levels of emotional and physical stress. The cold, rain, the lack of facilities for maintaining proper hygiene and the constant police presence have begun to wear on some of the demonstrators, who have been at Liberty Plaza for four days.

Two members of the medical committee announced that people who are physical or mentally exhausted should take a break from the demonstration for 24 to 48 hours to assure their well-being and so that they can return revitalized. Participants who don’t live in New York will be accommodated in the homes of demonstrators who live here.

The democratic processes that govern this occupation are nurtured by the daily training decisions by the facilitators. These facilitators are demonstrators who have been trained to assist in processes of peaceful and democratic dialogue between groups that can have differing interests. Every day more facilitators are being trained with the hope to see the group grow.

Today, at 11 o’clock a.m. of the fifth day of protest, one could observe a cleaning campaign underway accompanied by songs, dancing, music and solidarity. The resistance in New York City remains strong and upbeat.