at the Rotterdam World Port Tournament

HAVANA TIMES — It is quickly becoming an old and tired story but the Dutch national squad seems to have Team Cuba’s number. First came two tense defeats in Panama during September 2011 (IBAF World Cup) authored mainly by the highly effective hurling of first Orlando Yntema (second round) and later Rob Cordemans (gold medal game). Then the plot thickened with a bitter pair of setbacks ousting Victor Mesa’s talented if underperforming club from the recent World Baseball Classic in Tokyo.

Last night’s 7-0 whitewashing in Rotterdam at the hands of a stripped-down Dutch squad lacking the bulk of its WBC lineup was the fifth major loss to the Orangemen in the last six outings. The only relief over the three-year span was the 4-0 Cuban victory (behind stellar mound work by Vladimir García) during last summer’s Haarlem Baseball Week here in Europe.

And it may only get worse in the near future with an immediate rematch on tap for Wednesday evening and a still-very-likely Cuba-Dutch showdown here at Neptunus Family Stadium on Sunday afternoon.

The increasingly monotonous Dutch mastery once again was orchestrated last night by yet another round of brilliant mound work by veteran right hander Rob Cordemans; this time out the 38-year-old former pro actually trumped his 2011 gold medal showcase performance at Panama City while performing on a lesser stage here in Rotterdam.

Cordemans breezed through a near-flawless complete-game effort in which he scattered seven Cuban singles, never allowed an extra-base knock or a runner to advance past second, and induced 15 of the necessary 27 outs via tame infield or outfield flies that were easy targets for his competent defenders.

He struck out only two but kept Cuban hitters harmlessly at bay with six one-two-three innings. The game was decided in the middle innings when the Dutch struck for a pair of runs against Cuban starter Noelvis Entenza who gave up six hits over four-plus frames before departing with the bases jammed and none retired in the fifth.

Last night’s game in reality was not as one-sided as it might have appeared on the final scoreboard. Entering the top of the eighth the Caribbean islanders were down by only a slim 2-0 margin and still very much in the middle of the fray despite the first seven innings of relative impotency at the hands of Cordemans.

With only seven pitchers on hand (actually only six since Sunday’s starter Ismel Jiménez was already spent and thus unavailable for the next several days) manager Yovani Aragón was hesitant to start burning up his bullpen in the face of several crucial matches (including an immediate Wednesday rematch with these same Dutch) looming on the horizon.

If Cuba fails to reach the finals here in Rotterdam, the decision not to expand the Occidentales mound staff with a few extra arms will likely prove to be the all-too-obvious root of the problem. A short-duration one-week event with almost every game providing a must-win situation amplifies the need for a bevy of fresh arms.

All three of the week’s opponents have brought ten pitchers to Rotterdam; Cuba entered battle with a short arsenal of but eight available hurlers (only four true relievers), and then was immediately further handicapped by the unexpected departure of versatile starter Odrisamer Despaigne before the week’s first pitch was even tossed.

Monday night clearly displayed the problems now plaguing manager Aragón and technical director Victor Mesa as a direct consequence of the shortfall in available pitching. Already behind by four runs (an apparently insurmountable lead in the face of Cordeman’s mastery), the Cuban brain trust was unwilling to burn up extra arms in the eighth and ninth innings and therefore likely left Jorge Hernández on the hill far longer than advisable.

The painful result was a late Dutch onslaught that only further soured the embarrassing drubbing. The Cienfuegos reliever performed brilliantly in the early going by working his way out of a bases loaded jam (no outs) upon his arrival in fifth.

Hernández then breezed through six straight enemy batters in the sixth and seventh before the roof fell in during the eighth and ninth. In the late going the portly and rapidly tiring right hander surrendered five hits and five runs and further poisoned the waters with a wild pitch and a hit batsman. 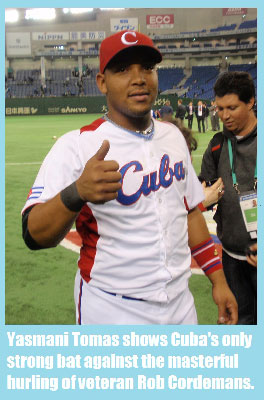 But if the Cubans once more came up considerably short this time around it was far more due to weak offense than it was to any pitching breakdowns or roster shortfalls. With two solid singles in three trips to the plate, Yasmani Tomás was the only slugger in manager Aragón’s lineup to display even a small mastery of Cordeman’s effective assortment of breaking balls and off-speed deliveries.

Both Yulieski Gourriel (on two occasions) and José Dariel Abreu wacked long fly balls that were chased down by the Dutch outfield in a ballpark that seems to deaden even the hardest hit balls. Only twice (in the second and seventh) were the Cuban bats able to muster so much as a minor threat, stranding a pair of base runners on each occasion.

On the whole it was one of the weakest displays on the part of frontline Cuban batsmen witnessed during any important game of recent memory. This was not a game in which the Cuban forces squandered their opportunities but rather one in which Cuban batters were never able to manufacture anything that even looked like a credible uprising.

(*) Peter Bjarkman is author of A History of Cuban Baseball, 1864-2006 (McFarland, 2007) and is widely recognized as a leading authority on Cuban baseball, past and present. He has reported on Cuban League action and the Cuban national team as senior writer for www.BaseballdeCuba.com during the past six-plus years and is currently writing a book on the history of Cuba’s post-revolution national team.