This happens almost every year, so it’s likely that the persistence of this disastrous cycle will sooner or later put someone’s life at risk or — in the best of cases — it will a produce “transit shelter home” that turns permanent for most people.

Erick has witnessed the future of his family in the situation of other neighbors, so he understands that gradually the damp and salt water battered walls of his home will someday give way under the tropical sun.

The stucco on the walls and on some of the roof beams — eaten away by the years — has disappeared; the ironwork over the windows is now simply a fine sheet of rust that holds up bits of planking and cardboard instead of glass.

Nothing left for repairs

Since the days of their house are numbered, Erick’s mother becomes increasingly bitter with every hour that passes as she dreams for a miracle more than hoping for a practical solution.  She works in a cigar factory in the mornings and cleans house for a Swedish couple in the afternoons, but what she earns is only enough for basic necessities.  There’s nothing left for the urgently needed repairs.

Erick, the oldest son, is only fourteen years old, but he’s fed up with listening to her recite the litany of unmet needs.  He and his two siblings hear her arguing “for any stupid reason,” he told me.  He understands what’s happening but I don’t know if he recognizes that his mother’s anger doesn’t come from her seeming indifference but from the frustration of being unable to provide them even a little comfort.

However Erick believes he can’t do anything to alleviate her discouragement than to stay away until the night falls, when he returns home with a few dollars that he’s able to collect from delighted tourists or some other spectators on a good day of acrobatics on the Malecon seawall.

Although he says he’s studying at a technical school, I know that he’s lying.  He only uses that line to distract his mother or to convince whatever “good cop” who stops him worried about his future or whatever “bad cop” looking for something in exchange for their “tolerance.”

But the truth is that Erick doesn’t ask for anything from those who watch him do his acrobatics.  It embarrasses him.  He told me that he’s not like others, and with pride he contrasted himself…he distinguished himself.  Quickly, between his various dives, he told me a few stories to illustrate his upstanding character.  He enjoys what he does.

He only does routines that he enjoys; ones that he and other guys from the neighborhood have rehearsed every day for almost five years.  They wait their turn, with one after another doing their flips in the air and then slipping into the water like fish.

Those of us in the audience took photos and applauded the audacity of diving so dangerously close to the reef.  The boys have learned how to wait for the incoming wave, to calculate the height of their acrobatic move and to judge the necessary distance of the jump from the wall or from the rock. 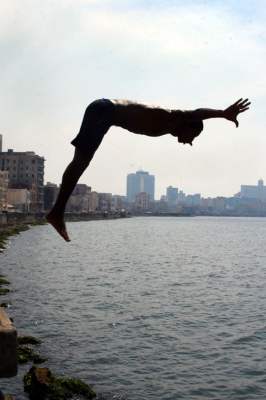 The water was not very deep and not the best.  A few yards away is where the sewer system serving one side of the city dumps into the sea.  The Almendares River spews its green and lifeless broth only a few steps from them.  But they ignore the warnings of some people.  Erick made a grimacing jeer and shrugged his shoulders to demonstrate his indifference.  He laughed when I told him that it could make him sick.

Then his turn came, and he ran up to plant himself on one of the diving areas of the wall.  He got ready for the plunge.  He looked at the wave intently.  He didn’t care about the racket being made by other people who knew that diving from there was the most daring jump.  Erick flexed his legs, raised his arms and took his dive just when the foam had barely touched the wall.  He knows also how to leave with it out into the deeper water.  Two, three, four seconds and finally he emerged smiling to applause, and with those a few coins ended up in his hands.

Erick returned to where I was.  I had taken a few shots so he wanted to see himself making his dive.  I told him that he did it very well and he turned toward the diving area, where a boy who was about twelve was preparing to imitate him.  Erick instructed him loudly, alerting him to keep an eye on the wave and to jump as soon as it broke.  This was the first time the boy had attempted it, so I didn’t want to look.  It could have been a mortal leap.

Another boy lost his life for $10

Erick told me that the previous week a beginner had split his head on the reef trying to earn ten dollars that one of the spectators had offered him.  Erick himself was the one who pulled the diver out of the water.  He was dead, and just a kid.

While we were talking, a photographer came up to greet Erick.  They spoke and the man offered him five dollars to repeat his act.  But Erick didn’t accept it.  When he returned to where I was, I asked him why he refused.  He responded saying that he only jumps when he wants to – otherwise things tend to go wrong.

Also, he had seen that same man the day he had to drag the dead boy out of the water.  Everyone had run to offer help, except for that guy; unperturbed, he only kept taking photos in the midst of tragedy.  That had rubbed Erick the wrong way, and he could only look at the photographer with scorn.

Erick made signs to the skinny boy so that he wouldn’t accept the offer made to him by the photographer.  But it was in vain.  Not everybody is in a position to refuse.

“Me, at least I can eat,” he told me as he looked apprehensively at the boy who was preparing to jump for the photographer.  Everything went well though.

Since it was getting late, I said goodbye to Erick.  He asked me to show him the photos of his jump one last time.  I did so and promised him that I would make him copies of the ones he liked best.

Delighted with my promise to return with them the following day, he shook my hand and said: “You know what I like most about diving into water?  It’s that I don’t feel anything while I’m falling, I don’t hear anything while I’m plunging and I forget about everything.”