Many Nicaraguans have denounced a number of government attempts to manipulate the news.  Here are some examples. Do you have others to add?

HAVANA TIMES – On March 15, dozens of journalists spent more than two hours following a yellow bus with curtained windows which was supposedly taking the released political prisoners to their homes. However, when the bus reached Leon, it was discovered that the passengers yelling slogans were actually workers from the Penitentiary System.

This was one of several deceptions and shows that the regime of Daniel Ortega has mounted during the last year in an attempt to disrupt the civic struggle that arose on April 18, 2018. We prepared a review of the incidents that have been uncovered, including the case where Ortega denied on an international level the existence of a paramilitary force, even while he was looking at a photo of them.

The fake abduction of Telemaco Talavera

On the night of April 22, 2018, a breaking news bulletin announced that Telemaco Talavera, president of the National Council of Universities, had been kidnapped by the students who were occupying the Polytechnic University. According to the information given in the government media outlets, Talavera had been taken to a classroom and was being held there under threat. Nonetheless, he himself later declared that he had come to the university to drop off humanitarian aid and, upon confirming that no one was injured, had opted to leave.

A video was then circulated in which father Mykel Monterrey refuted the supposed kidnapping. “He’s not kidnapped; don’t be fooled by any of the media that wish to give false information,” he declared.

The fake mother and wife

A month after teenager Carlos Bonilla was killed during the April protests, a video began to circulate on official media in which a tearful mother declared that they were using the image of her son (referring to a photo of Carlos) to elevate the death toll from the police repression. According to the woman in the video, about whom nothing was ever known again, her son was alive; she was asking that they stop using his image. However, a day after the video went viral, Bonilla’s parents refuted it, and demanded respect for the grief they were bearing.

In September of last year, this script was repeated when Daniel Ortega awarded a posthumous rank to a woman who passed herself off as the wife of police official Faber Lopez, who died 48 hours after requesting his resignation.

In what bus were they coming? 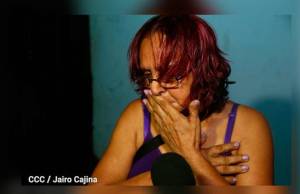 Up until now, it remains unknown which bus was supposedly hijacked in May of last year by a group of students occupying the Polytechnic University. According to interviews in the official media, the “gang members financed by the right” detained the bus and threatened to kill all the passengers.  However, what caused this event to go viral was that those interviewed by the government media seemed exaggeratedly nervous, to the point of not remembering what bus route they had been on.

Another of the supposed attacks on Sandinista sympathizers occurred near the Nicaraguan National Autonomous University. On this occasion, residents of the Miguel Gutierrez suburb, declared to the official media that they were attacked by the students who were holed up in that university when they demanded that they leave. A young woman even declared that they’d thrown a Molotov cocktail at her and to demonstrate showed some holes in her shirt, supposedly caused by the explosion. The strange thing was that her skin hadn’t suffered any damage.

Photo montages in the marches 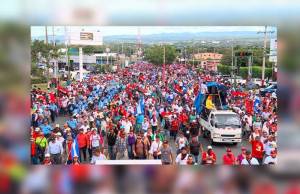 Due to technical carelessness, it became clear that the marches in support of the government weren’t as massive as they looked on television and on social media. Instead, their appearance had been doctored by camera tricks and a mix of stock images recorded during the peak years of the Sandinista Front. This was discovered on April 30 of last year, during a live transmission on Channel 4, when there was a jarring change of images. After that, internet users shared photos that exposed the regime’s deception. It’s worth noting that this tactic is also used by the regime of Nicolas Maduro.

During his interview with Daniel Ortega, journalist Andres Oppenheimer questioned him about the existence of the paramilitary forces, showing him a photo of a group of armed Ortega supporters. Ortega denied their existence, affirming: “They’re not paramilitary, they’re citizens defending themselves.”  Ortega then added: “Also, I’m not sure if that’s a real photo, because you know that these days they make montages. It could be that this photo has been put together by those on the right who could easily present their picture like it was a paramilitary group.”  The photo had been taken by a journalist from Leon who worked for the newspaper La Prensa.

A larger contradiction about the existence of the paramilitary arose because in all of the interviews that Ortega has given to the international media, his response regarding who they are changes. At some moments he assures that they don’t exist, but in others he declares that they’re citizens defending themselves; now, he affirms that they’re voluntary police. 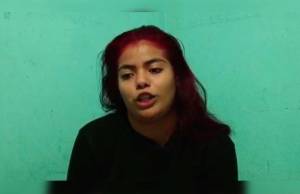 Before Valeska Sandoval was released from the Directorate of Judicial Assistance – better known as the El Chipote jail – she was forced to record a video in which she revealed how everything functioned among the students who were occupying the National Autonomous University and where she declared that they were receiving orders from members of the MRS party (Sandinista Renewal Movement). In the video that was circulated on the official media, she appeared nervous, and for one second you could just see that her hands were tied up. According to her own later statements, there was a gun pointed at her head while she was recording this video.

This was part of the strategy that the regime used to place blame on the political and religious leaders. As family members of political prisoners who are still in prison confirmed, at some moment they were each offered their freedom in exchange for pointing the finger at Monsignor Silvio Baez, Felix Maradiaga, and Dora Maria Tellez, among others.

The bus with fake political prisoners

In an attempt to get the journalists covering the second release of the political prisoners to house arrest out of Managua so that they couldn’t interview the freed prisoners, the Ortega regime used a bus and a minibus with fake political prisoners inside. The vehicles, whose windows were covered by curtains, were full of workers from the La Modelo jail.

However, this didn’t keep the reporters from interviewing the released prisoners, who spoke of the torture and bad conditions in which the political prisoners of the Ortega dictatorship are being held. 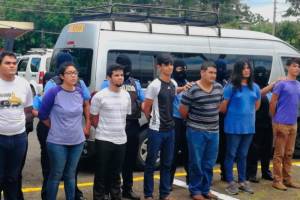 Up until now, Daniel Ortega’s regime hasn’t publicly recognized the existence of the political prisoners. Last year, during an official activity in which he rejected the presence of a working group from the OAS and the European deputies, who came to verify the situation of the prisoners of conscience, he said: “They’re concerned about the political prisoners in Venezuela and Nicaragua, but they never seem to understand and accept that those who’ve been detained and put on trial in Nicaragua are accused of common crimes. He who breaks the law, commits a common crime. There’s not one single prisoner here for speaking against the government. Those detained are those who tortured, killed and caused the death of hundreds of Nicaraguans.”

However, although Ortega denies the existence of the political prisoners, they’ve been billed in the official media as “the terrorists and the road-blockers”. In the country’s prisons, they’ve been kept isolated from the regular prisoners and have fewer rights.

In Nicaragua there aren’t any journalists in prison

Despite the fact that journalists Miguel Mora and Lucia Pineda Ubau were arrested in December 2018, the Ortega-Murillo regime insisted during the Universal Periodic Review of the United Nations that they weren’t arrested for exercising their profession, but because they had committed crimes.

“No journalist has suffered jail or prosecution for exercising their right to inform. In every case, if a person has had to respond before the justice system, they’ve done so for incidents of illicit conduct,” stated Valdrack Jaentschke, Ortega’s representative before the UN.

In the same vein, Ortega has said in some interviews that he’s given to the international media that in Nicaragua there’s freedom of the press. However, he’s confiscated the property of media outlets such as Confidencial, Esta Semana, Esta Noche, Niu and 100% Noticias. Journalists have been persecuted, defamed and attacked during the protests, a fact that has prompted at least 60 journalists to go into exile. 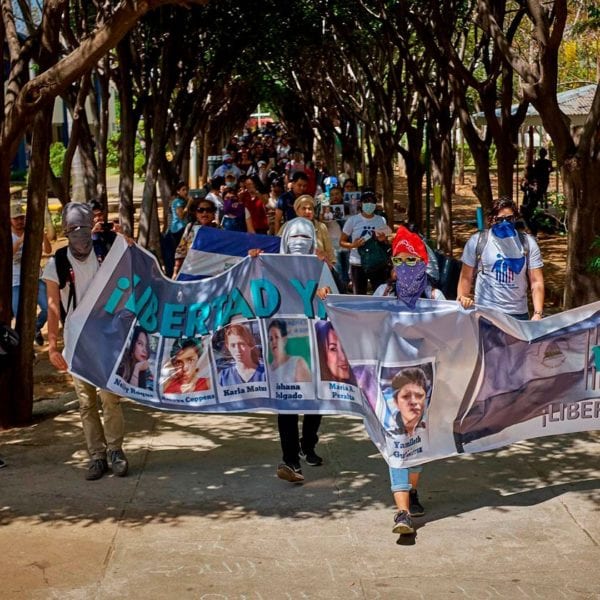 The greatest blow to freedom of expression occurred on September 29, 2018, when the Ortega Murillo regime prohibited demonstrations in public spaces, demanding that the demonstrators present a permit from the National Police.  Nevertheless, although some activists have requested such a permit, these have never been granted.

Instead, when a gathering or march is announced, the regime orders a strong deployment of riot police who repress and arrest the demonstrators. In the face of this, citizens have opted to protest within the universities, in the churches, or have held flash protests to avoid being arrested. Even so, the police harassment is constant.

“No priest has been attacked”

During an interview that Daniel Ortega granted to the US television channel Fox News, he asserted that “not one priest can say that he’s been attacked by the government or by government officials.” However, on July 9th of last year, the bishops from the Episcopal Conference and the Apostolic Nuncio were attacked by Sandinista mobs and paramilitary when they arrived at Diriamba, Carazo, to mediate in the wake of the attacks there, and they were again assaulted at the Lesser Basilica of San Sebastian. On that occasion, Monsignor Silvio Baez’ arm was injured. 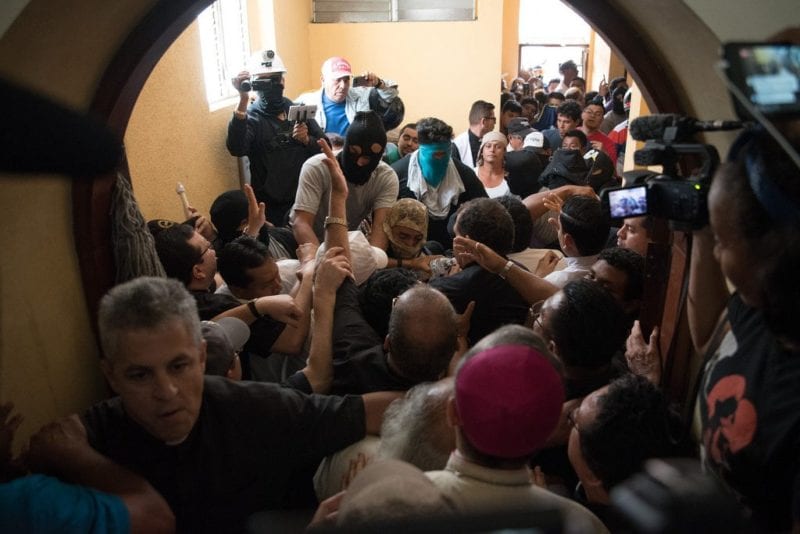 In the same way, Ortega assured: “No Nicaraguan has died in any church,” ignoring the killing of student Gerald Vasquez, who died during the attack on the Church of the Divine Mercy in Managua, where the students who had been occupying the Nicaraguan National Autonomous University had taken refuge, along with journalists and parish priests.

In a number of speeches, Ortega has attacked the bishops. Last December, for example, he said: “As some of the church hierarchy had gotten together, at our invitation, we told them that they should be mediators; but they stopped being mediators and became an active part of the coup forces… encouragng barricades, encouraging crimes, those who, for their principles as Christians, as pastors, should totally reject any crime.”

What lies would you add to this list?  We want to read your contributions.