HAVANA TIMES – Cuban economist Emilio Morales gives us an insiders look at the operations of GAESA, the military conglomerate that controls the lion’s share of the Cuban economy. The following article first appeared in Diario de Cuba.

With the money from emigrants, the conglomerate led by Luis Alberto López-Callejas builds hotels and creates real estate assets. But there is much more.

Two weeks after the recommendations were delivered to the Biden Administration by the commission created by the US Government to study and implement the sending of remittances to Cuba without passing through its military’s hands, nothing has yet transpired.

Meanwhile, GAESA is still barred from handling remittances sent from the US. Despite the fact that at the end of 2021 the Central Bank of Cuba authorized the non-bank financial entity RED S.A. to process the dispatches, no US company has been contacted by this company.

As is well known, remittances to Cuba have always been controlled by the Cuban military. Since their authorization in 1993, they were controlled by CORPORACION CIMEX S.A., a company created by Cuban intelligence in Panama in 1978, officially registered in 1979. As part of CIMEX , years later the companies FINANCIERA CIMEX S.A. (1984) and American International Services S.A. (1988) were also created, also in Panama.

In 1993 these three companies began to manage the business of sending remittances to the island. At that time, as a solution to the crisis generated by the collapse of the socialist camp and the USSR, the dictator Fidel Castro was “dollarizing” the economy, a step conceived mainly at the expense of Cuban exiles.

All these companies created in Panama, and others created in different tax havens, were founded with a view to circumventing the US embargo. One of the most well-known companies was HAVANATUR S.A., which would be in charge of managing the trips of exiles from the United States to Cuba. This company was also part of CIMEX S.A. With this network the juiciest financial scheme that the Cuban regime ever managed to invent in 62 years of the “Revolution” was completed: remittances + travel by U.S. emigrants to Cuba. This magical formula also gave rise to a profitable market for “mules”.

This racket has generated even greater dividends than those obtained by Castro and his cronies after all the country’s industries were stolen in the initial years of the Revolution through nationalizations and confiscations without compensation for the foreign and large companies operating on the island back then.

Until 18 months ago, before the pandemic, this lucrative formula (remittances + trips by emigrants from the US to Cuba + the dollarized retail market), created based on migration and dividing families, was worth an estimated eight billion dollars yearly.

As of 1993 Cuban emigration would play a key role as one of the main sources of financing for the Cuban regime. To achieve this, a dollarized market was created on the island, managed by CIMEX S.A. mainly through its chain of stores forming part of this dollarization strategy, whose main source of financing was and continues to be Cuban exiles.

To date, 49.127 billion dollars in remittances (cash) have been raked in by this network of companies, today in the hands of General Luis Alberto López-Callejas. No other area of the Cuban economy has posted such astronomical dividends in 62 years of the Communist economy. These millions in capital have been routed by a machine deviously designed to capture dollars at the expense of Cuban emigrants. If to this we add what the travel and mule business has generated, the figure comes to around $120 billion, more than that received from the USSR until its disappearance. And yet, even with all this capital, in addition to that received from later from Venezuela, the Cuban economy continues to be one of the most backward on the planet. Without any doubt, it is a parasitic and irreformable model.

The remittance business was perfected and grew as emigration and the dollarized market on the island burgeoned. It was a relationship characterized by direct growth: the more Cubans emigrated, the more the foreign currency store chains grew, both those of CIMEX and GAESA (TRD Caribe was the main chain), as well as travel, which followed the same growth trend in remittances and emigration to the US.

Until 2006 remittances were controlled by Fidel Castro’s group (CIMEX S.A.). After the dictator’s illness, GAESA took control of CIMEX and Luis Alberto López-Callejas began to oversee his favorite grift: remittances.

To do this, López-Callejas placed Colonel Héctor Oroza Basutil, his right-hand man at GAESA , in charge of CIMEX S.A. Said colonel would take direct control not only of CIMEX, but of the entire network of companies in Panama, of which he is the chief manager, as recorded in the public records of that country. This meant that GAESA had a rich and inexhaustible source of financing to launder capital.

López-Callejas’s magic formula to launder the capital from remittances

One of the most effective ways has been to use a large part of the capital obtained to launder money by building hotels and creating real estate assets in the name of another of octopus-like GAESA’s companies: Gaviota S.A. With the acquisition of the remittance business, GAESA would no longer need foreign investment for the construction of hotels, as “generous” exiles would be its new source of financing. 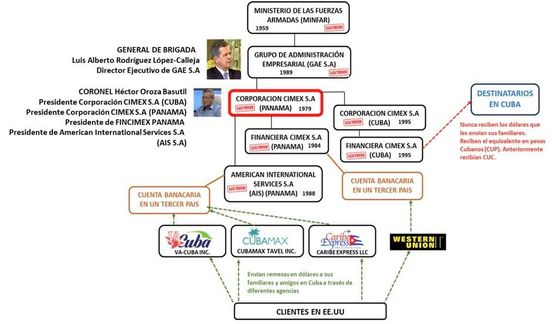 Thanks to this, Gaviota S.A. now has 110 hotels, standing as the leading company in Latin America, with more than 40,000 rooms. No financial group in the world manages the economy of a country like the organization that controls Cuba today, led by General Luis Alberto López-Callejas, who not only dominates the army, the repressive apparatus, and the Communist Party, but also the Mariel Special Development Zone (ZEDM), almost the entire dollarized retail market, tourism, remittances, mining businesses, and up to 27% of ETECSA’s shares.

To give a graphic example of how remittance capital is laundered and converted into real estate assets, just look at the hotel construction statistics for the period from 2017 to 2019, in which 57 new accommodations were built, of which 25 were five-star facilities, and 32, four-star. See Figure 2.

In the period from 2015 to 2020 over 17.614 billion dollars were invested. Interestingly, this was a period during which hotel occupancy was only 46.3% (2015), with a downward trend in the following years, hitting a low point of 14.7% in 2020 in the midst of the pandemic, though this was the year with the most investment: 4.139 billion dollars. What the numbers show is something totally irrational in a context where an extremely difficult economic crisis and the scourge of Covid-19 prevailed, causing the health system to collapse, and leaving the country without resources, food, or means to deal with the pandemic. 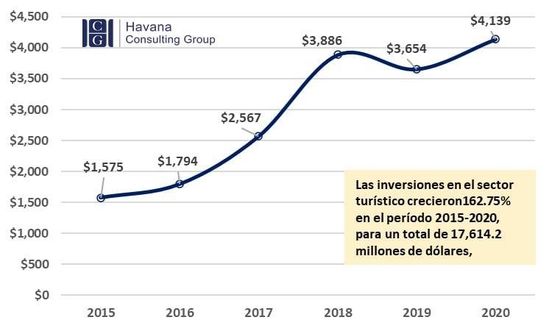 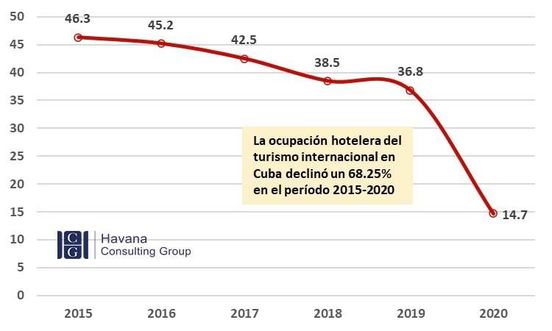 As part of the mechanisms to attract more dollars, this group in power implemented a new way of dollarizing the economy by opening stores at which one can only buy using magnetic cards charged with foreign currency. The new strategy began with the sale of household appliances, with the aim of counteracting the strong, unstoppable competition posed by mules, who brought these devices from abroad. Later this dollarization spread throughout the country, ranging from food to hygiene and household products.

This novel dollarization would later include the prohibition of physical deposits in dollars on these magnetic cards, called MLCs, forcing users to use other currencies in cash to recharge them. GAESA, in this way, took another bite through currency exchange, as, for the purposes of deposits, the MLC cards are in dollars. Thus, it was only possible to recharge the cards in dollars from abroad through bank transfers.

Cubans can only use these magnetic cards in Cuba to buy at GAESA stores, where products cost at least 240% more than where they are bought abroad. If someone wants to withdraw money at an ATM, they only receive pesos at a rate of 1 USD for 25 CUP. These cards do not work anywhere else in the world.

In this way, the dollars that emigrants send to their relatives in Cuba remain in a bank account in a third country, and those who reside on the island receive a devalued currency or an electronic dollar that can only be used at stores belonging to GAESA.

Under this scheme GAESA has perfected a way to increase its main source of financing and, along the way, further fine-tune its money laundering business to build hotels and develop other businesses. This is occurring in the midst of a crisis during which the tourism industry is dead and the country is in dire need of financial resources to purchase food, medicine and other supplies to combat the pandemic.

Remittances to Cuba constitute the main financial source of a multimillion-dollar money laundering business concealed behind decrees and laws implemented at its behest, managed by a network of companies set up in tax havens that are not audited by the Comptroller General of the Republic or any other civil institution of the Cuban State.

No other country in the world has a business structure of this type, managed by an organization that profits from money that does not belong to it. In Latin America remittances are handled by state banks, private banks, private remittance companies, and even cooperatives, with full transparency and supervision. The Cuban model for the control and management of remittances is nothing like the models that exist in the region. Rather, it is a black box in the hands of a criminal organization.

90% of the almost 50 billion dollars in cash that has been routed in one way or another through this network of companies since 1993 has left the United States sent by Cuban emigrants.

Today, General Luis Alberto López-Callejas, executive director of GAESA, sanctioned by the State and Treasury departments, continues to run and refine this multimillion-dollar money laundering business with total impunity despite a crisis that has caused the country to collapse and led to a popular uprising sparked by the government’s incompetent management of the economy.

To all the above it must be added that this blatant theft is occurring in the midst of a pandemic in which hundreds of Cubans are dying every day due to a lack of medicines, oxygen and effective vaccines. The images of overwhelmed hospitals, stacked corpses and burials in mass graves are gruesome. The desperation manifested by people frantic to find care reveals a population that is helpless and abandoned by a government controlled by a mafia dedicated to money laundering instead of aiding its people.

The US justice system currently has an extradition order out against Alex Saab for money laundering, for all the shady deals he did with Nicolas Maduro’s regime. What difference is there between him and Luis Alberto López-Callejas?

In the face of so much ignominy, impunity and evidence, it is time for the Biden Administration to get to work and enforce the law on those breaking it just 90 miles away.

2 thoughts on “GAESA: Its Business Is Money Laundering, Not Managing Remittances”