Text and Photos by Lazaro Gonzalez 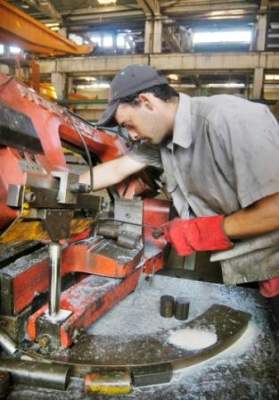 HAVANA TIMES, May 24 — “Food sovereignty” is one of those concepts that breaks free from the realm of ideas and sinks its roots into the even more complex terrain of concrete reality.  It reaches full significance precisely in the fields, alongside the furrows, and with a guataca (hoe) in hand.  For Cuba — which imports some two-thirds of the food it consumes annually — this issue has become a matter of national security.

With the objective of reversing that negative tendency in the intermediate term, the Cuban government has put into practice a group of measures: the granting of use rights over formerly fallow land, increased sales prices being paid to growers, urban and suburban agriculture programs, investment in plant fertilizers and recent approval of credit for individual farmers, among others.

The implementation of some of these has clashed with “bureaucratic obstacles and lack of foresight by local government agencies,” said President Raul Castro in the Central Report to the recent Sixth Congress of the Communist Party of Cuba.

The development of the machine industry for the manufacture of agricultural implements constitutes one of the strategic mainstays for the substitution of food imports.  When the plan was conceived the principal responsibility fell on the “Heroes of July 26 Plant,” in the northeastern province of Holguín, given its level specialization and the technology in place. 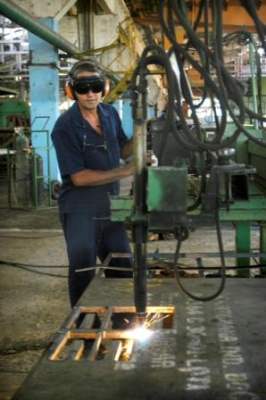 Subsequently, the need to accelerate deliveries and to integrate strengths led to the incorporation of other factories across the whole country, though these were always supervised by the Technical Department of the Heroes of July 26 Plant – the spearhead of this effort.  The prototypes created by this company were subjected to tests by cooperatives of the eastern region and endorsed by the Center for the Development of Agricultural Machinery.

Since this past October until the end of May, some 25,000 agricultural implements were produced in Holguin by that plant’s Campesino Program.  “More than half came out of our workshops,” highlighted Carlos Martinez, the production director at the Heroes of July 26 Plant.

“Initially the contract with the Ministry of Agriculture called for the manufacture 33,500 implements in 2010, but the supply of raw materials fell through due to problems with imports.  The situation only began to stabilize after September.  Since then we have almost everything guaranteed to produce what was outstanding from last year, which means metals (basically steel), screws, paint…

The great majority of the supplies are imported, so these purchases in hard currency make the products more expensive.” 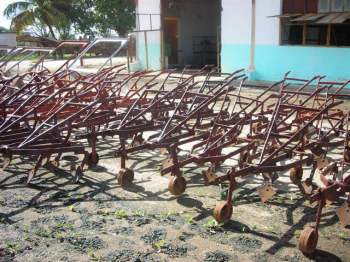 These products can be acquired today across the whole country in campesino assistance centers.  But, as you will see in the second part of this report, the sales figures have been ridiculously low in comparison to production, due basically to the high prices.

“We always have to keep the quality up, as there are implements susceptible to going out with imperfections.  For example, we’re very demanding with the manipulation of pieces just out of the oven,” said Javier Caneyes, the head of the Production Services Division and a veteran who has spent 26 years working in the factory, which has been around 30 years come July.

At the end of 2010, after six years of preparation, the Heroes of July 26 Plant certified their ISO 9000 system of quality standards administration. 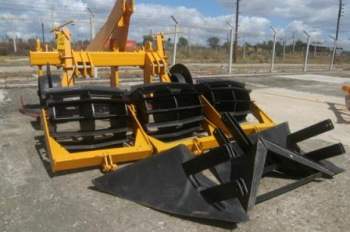 “Now we’ll follow up with our products.  We offer implementation services and post-guarantees through our Technical Support and Post-sales groups.  They offer information on technological improvements, feedback to our business counterparts, and design and development services.

In the case of the Campesino Program, during the test period these specialists garnered valuable tips and recommendations from the growers,” said Rubier Luaces, the principal design specialist.

Similar fruits have been rendered through the creation of this group in the case of major motorized implements (tillers, multi-tillers, cutting machines, mowers, cultivators, tows, plows, among others) for the ministries of Agriculture, Sugar, the Interior and the Armed Forces.

Multiple-use towing equipment and feeders, as well as three-disk plows, have substituted for imports.  Through this, the Holguin-based company saved the country $337,000 dollars last year, while maintaining the quality levels, in connection with the equivalent products that would have otherwise been acquired overseas, in agreement with its director of Production. 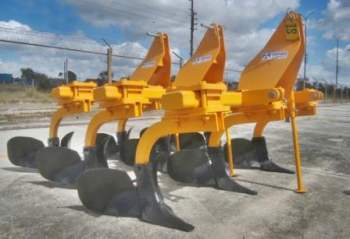 Multiple-use towing equipment and three-disk plows, along with the 11 and 13 tine cultivators, and tillers (small, with tires and 16 disks) are exported to Venezuela.  That South American country, Cuba’s principal commercial partner, bought a total of 200 implements in 2010, for a value of $1.2 million, a historical record for the company.

However, Martinez criticized the poor market administration on the part of entities designated to oversee such activities, such as Maquimport.

Amaury Rojas, an experienced machine shop operator, also expresses disapproval that for years — due to casting problems — a good part of the raw materials arrive at his workshop with low quality.  They are often full of pores in their interior, which damage the blades and the blocks and affect the quality of the end product. 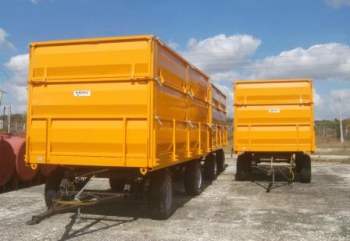 Omar Marrero, head of the Agricultural Implements Division, agrees and noted that the Heroes of July 26 Plant annually reject around 40 percent of the casted parts sent by the Socialist Vanguard Plant in Havana and by the Holguin Foundry.

Rojas added: “A while ago we were discussing this situation with the bosses, because it generates many rejections and, since we work in connection, we can’t sell those rejected pieces.  So, all of this results in wastes of time, electric energy, effort and the useful life of the machines.”

We found Erasmo Zayas, a time-hardened boss in the technical area of cutting and molding, immersed in changing the oil of a machine needed to continue the production of tiers, tows and carts for animal traction.  He pointed out: “I like my work a lot – I consider it very important.  The problem that affects us most is when raw materials are delivered late.  Other problems can be solved along the way.”

“Everybody doesn’t like mechanics, but as time goes by you get used to it, you acquire experience and you almost feel like you’re the owner of the company when you see the fruits of your labor.  There’s nothing better than the prestige one feels as a worker, with your own sweat,” said Enio Ramírez.  His words went beyond the questioning: Why doesn’t this worker (after 27 years with the firm) feel like he is the owner of his socialist enterprise, supposedly the property of all the people? 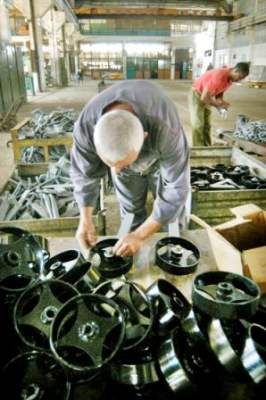 Another prestigious mechanic in the machine shop, Roberto Sao (a founder of the center, acknowledged for 19 consecutive years as a “national vanguard worker” and an “illustrious son of the city”) recognizes that his work is exhausting because it’s necessary to stand on foot for many hours and to frequently manipulate heavy pieces.

“But I like mechanics.  I enjoy it, though it’s unfortunate that our wages are so low.  I only earn 285 pesos a month (about $11 USD) and that’s not enough to motivate anybody.  I would like to encourage the younger workers to learn new things, but to attract youth it’s necessary to pay them better for their work.”

“In this sector, workers are very poorly paid,” said Marrero, the head of the Agricultural Implements Division.  “Although we bring in high profits, we generate hard currency for export and we substitute imports; our technicians and operatives are some of least paid workers in the province.”

In noisy battle trenches like this, where the steel gives way under the weight of “heavy sweat,” despite the anorexic pockets, this is where agricultural progress and the country’s food sufficiency are being decided today.  To turn these fatiguing occupations into opportunities for decent material benefits constitutes the turn of an inevitable screw.  To realize them implies taking good care that the cart remains behind the horse.

To be continued on Wednesday…

One thought on “Putting the Horse behind the Cart (I)”