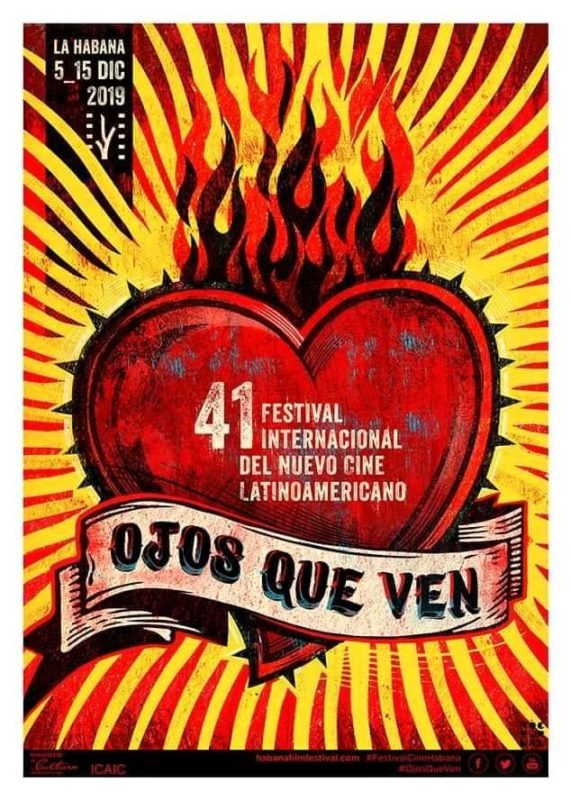 HAVANA TIMES – When the International Festival of New Latin American Cinema (AKA: Havana Film Festival) was born in December 1979, a new window was opened through which to spread and promote the cultural identity of the region.

Since then, the last month of the year is anxiously awaited by moviegoers, creators, and the general public. Many save their vacations for the Festival dates; others take advantage of their little free time to go to some of the later nighttime showings.

This 41st edition is dedicated to the centennial of Santiago Álvarez, a renowned Cuban documentary filmmaker, and to the 60th anniversary of the Cuban Institute of Cinematographic Art and Industry (ICAIC).

Between 5 and 15 December, the hustle and bustle will increase on 23rd Street in the capital of Vedado, and people will greet each other as if they had known each other for a lifetime, even if they have only met at the exit or entrance of a cinema, commenting on a movie.

The Havana cinematographic event is characterized by the large audience, because, for a reasonable price of two pesos (the equivalent of 0.10 USD) , tickets can be purchased before the shows, but there is an option that is very popular: passports, for sale from the month of November, they offer the option of watching seven films for only ten pesos.

Each year the Festival has as a main course a contest with different categories, in addition to other screenings from the international scene. In this edition, the jury must evaluate 21 fiction films, 19 short and medium-length films, 18 opera primas, 31 documentaries (long, short or medium-length), 23 animation works, 25 unpublished scripts and 30 posters.

The number of films to enjoy has been decreasing slightly, however, for this year there will still be a total of 300 exhibitions among all participants, both inside and outside the awards contest.

According to the organizing committee, the change has been in order to allow a more tight programming to the circuit of cinemas where the exhibitions take place, and they clarify that the movies with the greatest demand can be repeated.

Brazil and Argentina are the countries with the greatest presence in the Festival. From the first comes Bacurau, from the directors Kleber Mendonça Filho and Juliano Dornelles; The film takes place in a matriarchal village located in a Brazil of the future.

“Marighella”, directed by Wagner Moura, addresses the last five years of the life of legislator, writer, politician and guerrilla Carlos Marighella, one of the main organizers of the armed struggle against the Brazilian dictatorship, from 1964 until his violent death in an ambush in 1969.

“It Should be Law” is an interesting Argentine documentary by Juan Diego Solanas, which introduces us to a struggle that has shaken the country for a long time, through testimonies of women and men who wear the green scarf as a sign of the Campaign to Legalize Abortion.

“Perro Bomba” (Chile France) by director Juan Cáceres is one of the Opera Primas whose protagonist, a young Haitian, lives quietly in Chile, but with the arrival of a friend his life is agitated.

Among the films in the International Panorama section, movie lovers of Brazil’s Fernando Meirelles will have the opportunity to see his latest production: “Dos Papas” (Two Popes), which investigates the relationship between Pope Benedict and Pope Francis.

“Martin Eden” will arrive from Italy, based on a novel by Jack London and directed by Pietro Marcello. It’s an opportunity to understand why Luca Marinelli surpassed Joaquin Phoenix (The Joker) at the Volpi Cup as best actor.

French director Olivier Assayas promises to fill the movie theaters with “Red Avispa”, based on the book The Last Soldiers of the Cold War, by the Brazilian Fernando Morais, who tells the story of the Cuban spy network that infiltrated in anti-Castro organizations based in Miami.

There will also be showings from Spain, Germany, Great Britain, South Korea, among others. And in the Documentary Panorama section, unpublished images of Joseph Stalin’s funeral will be shown in the documentary State Funeral, a co-production between Holland and Lithuania, directed by Serguei Loznitsa.

What do Cuban filmmakers bring?

The cinematography from the island is highly anticipated by the Cuban public. ¿Eres tu papá? (Is it you dad), the Cuban horror film by Rudy Riverón, was not accepted in this edition of the event despite having won awards at other festivals. Among the 300 participating films there are several of Cuban filmmakers; “Looking for Casal”, by Jorge Luis Sanchez, an encounter with the life of the 19th century Cuban poet, will compete as a feature film.

“En busca de un espacio” (In Search of a Space) is the most recent production of filmmaker Marilyn Solaya. The documentary brings to light the role of women in shaping citizenship in Cuba.

Armando Capó Ramos arrives with an opera prima, “Agosto” (August), set in the hot and convulsive summer of 1994. Patricia Perez and Heidi Hassan bring us “A media voz” (Soft-spoken), with a good use of archival images that tell us about the diaspora.

Amed A. Bueno will represent Cuba in the animation section with a short of nine minutes, “Pez Luna” (Lunar fish), which takes place in a marine-space environment.

“Portrait of an always adolescent artist”, by Manuel Herrera; “Brower The Origin of the Shadow”, by Katherine Gavilan and Lisandra Lopez and “Organo”, by Rosa María Rodriguez, are some of the Cuban documentaries to be shown.

In addition to movie poster displays, the Havana Film Festival attracts figures of the seventh art recognized throughout the world and with whom our audience will have the opportunity to dialogue, listen, and enjoy their work.

There are only hours left before the official opening of the Festival on Thursday, which will take place at the Karl Marx Theater at 6pm, with the performance of the National Ballet of Cuba followed by the Argentine film The Battle of the Giles.

However, starting in the morning on Thursday, you can go to any of the ten cinemas that will host the Festival program, most located on 23rd Street in Vedado: Yara, Chaplin, Riviera, 23 and 12  and La Rampa, as well as the Acapulco and the four theaters of the Multicine Infanta in Centro Habana.

Do not miss this great opportunity to learn about the most recent cinematography of the continent and, as well as the productions from around the world.