The Cuban Revolution turns fifty on January 1st and a host of institutions have joined to celebrate the date in style. Here in the capital there are activities each day and evening and all are receiving a big turnout.

Over the weekend I attended several including a concert at the Fine Arts Museum which brought on stage some of the country’s top young jazz musicians. The night belonged to pianist Harold Lopez-Nussa and his project.

Playing numerous still untitled songs and others like La Jungla, Gran Via and a creation dubbed la zamba cubana, the pianist was accompanied by Nestor del Prado on bass, Mauricio Gutierrez on percussion, Maikel Gonzalez on trumpet, William Roblejo who dazzled on violin and two other Lopez-Nussa’s (Harold’s father and brother) who alternated on drums.

The following day at the same venue award winning pianist Roberto Fonseca and his group Temperamento took the stage with their now habitual end of year concert, sold out days before the performance.

The Pabellon Cuba exhibition facility we talked about the other day in the presentations of “That’s Fidel” and “With the Bases Loaded” had a special Saturday children’s activity including the popular La Colmenita theater group.

Amid a sea of smiles, Asari wore a rumba dancer costume; Yasiel ran from one end to the other at the risk of losing his glasses; Osmani confessed that he felt happy when he saw Meñique defeat the Giant with intelligence and a child’s cunning. There were word games, dance competitions, costumes, guessing riddles for kids and adults. Who won? Good question. Happiness won!

In Trillo Park located in the heart of densely populated Centro Habana, the rumba made the streets vibrate. The Clave and Guanguanco group played well known songs for a dancing public, some more discrete than others. You could smell the rum in the air before arriving at the park. Women, men, children, poor and not so poor, young and old, and everyone was having a good time. A version of Pablo Milanes’ New Trova Movement emblematic ballad “Yolanda” performed by the Los Ibellis group with a more aggressive rumba style surprised many in the audience.

There are still many hours before the main anniversary celebration on Thursday evening. And the options on the final two days of the year include poetry readings, trova music, jazz under the stars, book sales, games and children’s songs.

While those activities continue, in the majority of the municipalities outdoor stages are being erected for the bands to play on New Years Night. For more on the 50th anniversary day concerts check out: http://havanatimes.org/?p=3331 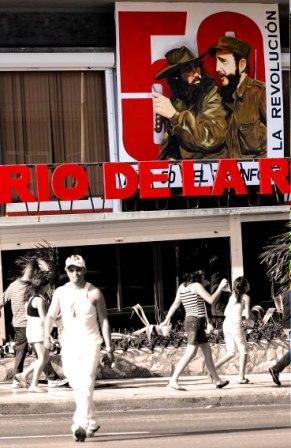 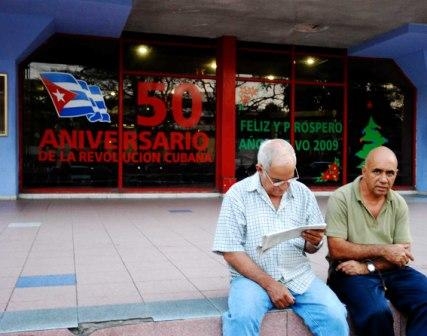