HAVANA TIMES — On Thursday, an event that marked a victory for Cuba’s alternative art scene took place at the Museum of Dissidence’s headquarters on Damas Street, in the noisy Havana neighborhood near the port.

Artist Reynier Leyva Novo made official his 3800 CUC (=USD) donation to the #00 Havana Biennial, which will be held from May 5th-15th.

The donation is the full amount received for the work called “No me guardes si me muero. La transaccion”, (Do not keep me if I die, The transaction) which was recently bought by the state-run National Council of Visual Arts.

The work that this institution bought displays an urn which holds the ashes of Jose Marti’s complete works, which the artist cremated, leaving the last volume intact, which is the guide. As a result, the surviving volume becomes the record of what the flames consumed.

In a room filled with enthusiasm, Yanelys Nunez read the donation certificate where the participants’ official information were cited: “between the #00 Havana Biennial, without a legal residence as it is a short-lived independent event (…), represented in this certificate by Luis Manuel Otero Alcantara, etc. And the other party Reynier Leyva Novo, Cuban citizen, etc.”

This unusual transfer converts the State into an involuntary sponsor of an event it doesn’t welcome and has been boycotting since the beginning.

On the occasion of this biennial, the AHS (Hermanos Saiz Association) pressured an artist who already had a venue to not participate, which they were successful in doing. And the Ministry of Culture summoned a meeting with every artistic branch, warning artists linked to the institution, “that they shouldn’t participate as it’s being organized by dissidents.”

Luis Manuel Otero spoke about how the idea for the event was born: “at these times of crisis which we ordinary Cubans are experiencing, when you see that a piece of art can reach an exorbitant price for a person like my mother a manicurist”, for example.”

He told those present about how the initial organizers threw themselves into this adventure being carried more on their drive and intuition than resources, knocking “on artists’ doors who said yes, others said no out of fear, a fear they also respect.”

He said that the fact that the donor decided “to take this step, putting all of his comfort at risk, moves me greatly and goes beyond a simple sum of money because people who responded to the #00 Biennial call with apathy are now reconsidering their position and are alse welcome, because we want to be inclusive.”

Then Reynier Leyva said: “I initially thought to make the donation in the form of a bank transfer as I don’t have legal status to hand it over officially, but the certificate idea was a lot more interesting and also has to do with the concept of the piece that was bought, which consists of the cremated remains of Jose Marti’s intellectual body of work. So I wanted to do this in 1 peso notes, which have the image of the hero’s death at the battle of Two Rivers, (although it’s a very doubtful image from a historiographical point of view), but it would make Marti present during the transaction.”

Unfortunately, he ran into an obstacle when banks told him that they were no longer receiving any 1 CUC bills (only coins) and the handing over the money was in 50 CUC notes. 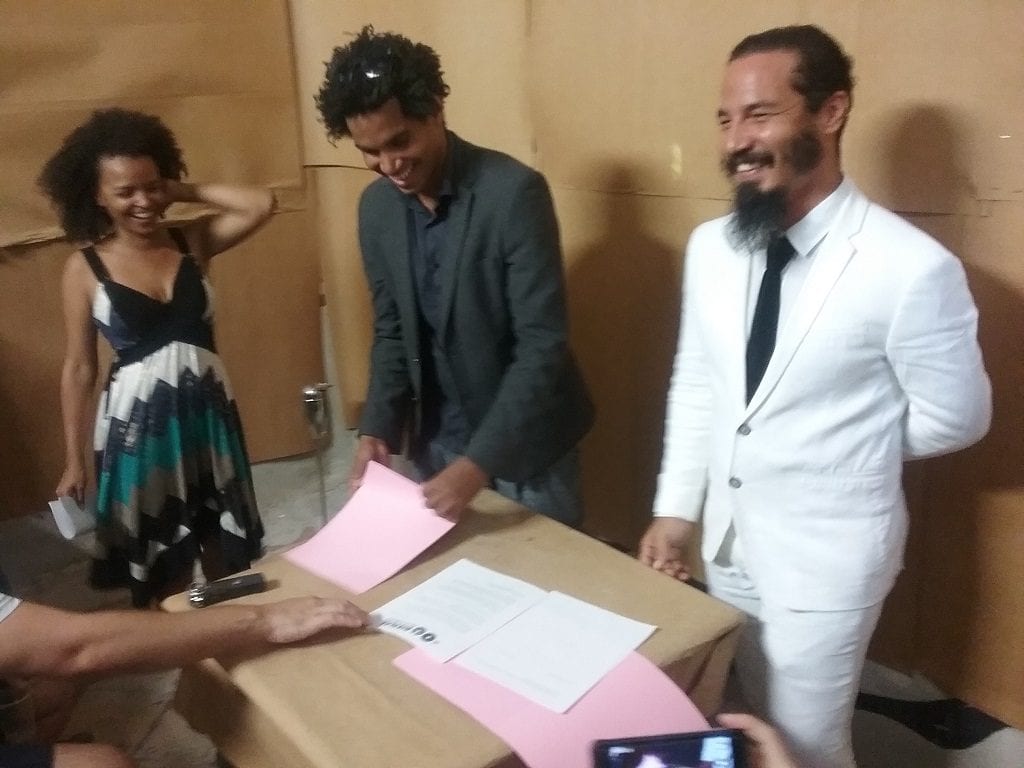 The donor artist called the #00 Havana Biennial an “honest and legitimate event from the beginning” and criticized the fact that after the crisis unleashed by Hurricane Irma, the National Council of Visual Arts unilaterally decided to postpone the official Biennial until 2019, instead of summoning artists to come up with a collective strategy. He highlighted the fact that the event is “needed right now for Cuba” and that the Biennial “is the heritage of Cuban artists.”

After handing over the envelope with the full amount inside, the room broke into loud applause. Curator Abel Gonzalez said: “it’s a collosal act of bravery, and I don’t know if he’s aware of the support he’s giving to the #00 Havana Biennial and to the people who are going to join as a result of his work.”

Journalist Boris Gonzalez also interrupted to comment on how the intention of artists who have defended freedom of speech in Cuba, like Tania Bruguera, has been distorted, claiming that they are performances which were conceived “to sell.” He also noted how the institution previously hijacked the Alamar Rap Festival, held in a city full of grey apartment blocks and no alternatives for young people.

Visual artist Hamlet Labastida remembered that the 1st Havana Biennial held in 1984 was an uncertain, manufactured event. He pointed out that “the Cuban State, the Ministry of Culture, can’t think they are the owners of Cuba’s cultural movements.” As, “artists with little, or no, resources can hold a biennial, festival.” He noted that the “axis of institutional centralism has moved, it changed and they have to finally realize this.” Labastida added that the #00 Havana Biennial “is tangible proof of what can be done, with minimal resources, you don’t need Pabellones Cuba, Cabanas, the Wilfredo Lam Center or the Ministry of Culture.”

Cuba’s alternative art world are living a unique moment. And the #00 Biennial is like a boomerang for Cuban institutions for all of the events the Cuban government has stolen or taken apart, disguised in their strict cultural policy which doesn’t understand art, but fears it and undervalues its social function. Art belongs to the artists and to the community.