HAVANA TIMES – If how a place is decorated is what makes you decide to go in, you might not be tempted by “El Café”, located on Amargura street, between Villegas and Aguacate streets, in Old Havana.

The only things you can find there are white walls, incandescent light bulbs hanging from the ceiling, wooden tables and low chairs, not very elegant at all. There aren’t any decorative pieces that recreate an early-mid 19th century vibe.

However, you’ll find that it’s not empty and while you’re deciding to go in or not, it’s filled up already. El Cafe always has customers and you even need to share a table with strangers sometimes. Paraphrasing something we say a lot here in Cuba, so many happy-looking customers can’t be wrong: El Cafe must be good.

Here, the black nectar of the white gods (as it’s referred to, even though it was discovered in Africa), has an aroma, body and flavor that will leave you in extasis. And, not just the expresso. I have had one of the best cortados (expresso with a splash of milk) and frapuccinos in Havana, here at this cafe. If you are vegan, you can ask for it to be made with oat milk instead.

However, you have coffee at the end of your visit and it’s just one of things that El Cafe has to offer, as it also serves breakfasts and light lunches (it’s open from 9 a.m. until 6 p.m.). The menu features fresh fruit, eggs, sandwiches (plus a vegan option), yoghurt with granola, hummus (my favorite) and fresh juices (all made at the time of your order). The bread here doesn’t contain yeast, it is made out of sourdough.

Keeping a steady and cost-effective menu going in a country where supplies are so inconsistent and many products such as eggs (most recently, flour for bread too) can disappear, is the biggest challenge for the private sector and, as a result, for Nelson, the owner of El Cafe. This 39-year old man, who graduated with a degree in Industrial Engineering from the Technological University of Havana (CUJAE), and never dreamed of being in the food service business. He hoped “as a Cuban living in Cuba” to be a human resources or logistics manager in any Cuban company. However, he started dating a young Finnish anthropologist (now his wife) and they decided to move to London after a while.

“We decided to follow the culinary world with the idea of having a business in England one day. I came back in 2014, mainly because my father was sick and I needed to look after him.

“We opened in 2016. First, I had to find the right place and then get it ready. I didn’t have any experience, I had never had a business before. I had worked in many restaurants and that helps give you an idea about what you want to do, but I was never sure. 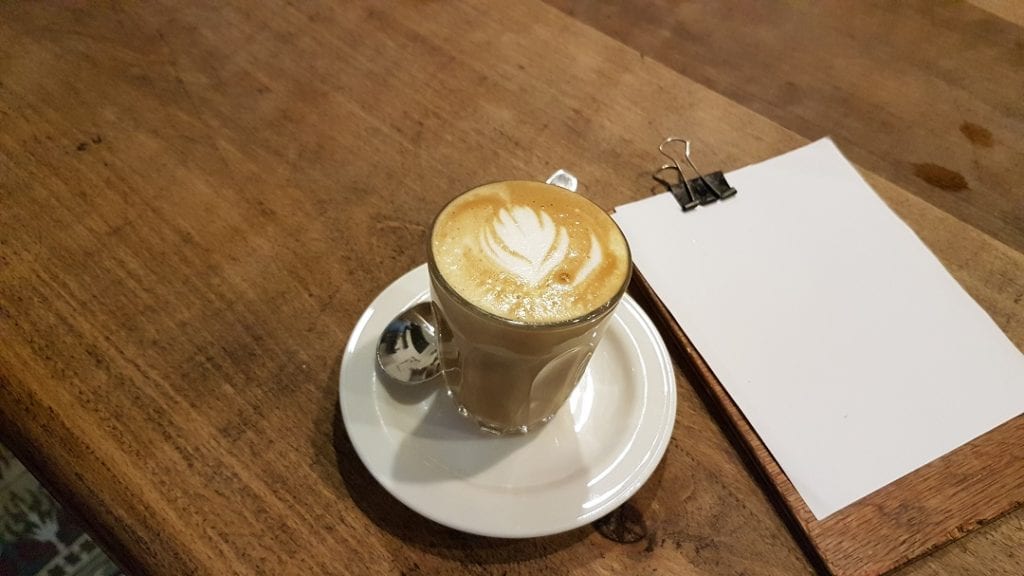 “I had to make many decisions about how I wanted people to see this place, and customer service. I spoke to lots of my friends. In the end, I decided I wanted something minimalistic and functional. I’m not interested in there being a sewing machine in the corner, just as decoration. Here, food that looks good and tastes good is our decoration.

“I used to live in a very trendy part of London. Being sustainable was already a trend over there. Using the most simple and natural things in your diet, that you can digest easily. That’s where the idea for sourdough bread came from. You don’t need yeast, just flour and water. The bacterias grow on their own. It’s cheaper and more sustainable. We took out an ingredient that requires it’s own manufacturing and packaging process. We try to use the best quality flours there are. The best thing about this bread is its flavor and texture.”

In spite of selling cheaper and more sustainable bread, Nelson was also hit by the latest flour crisis in Cuba.

“We have had to tell customers: “there isn’t any bread”. And they get annoyed. We haven’t had eggs or chocolate either. 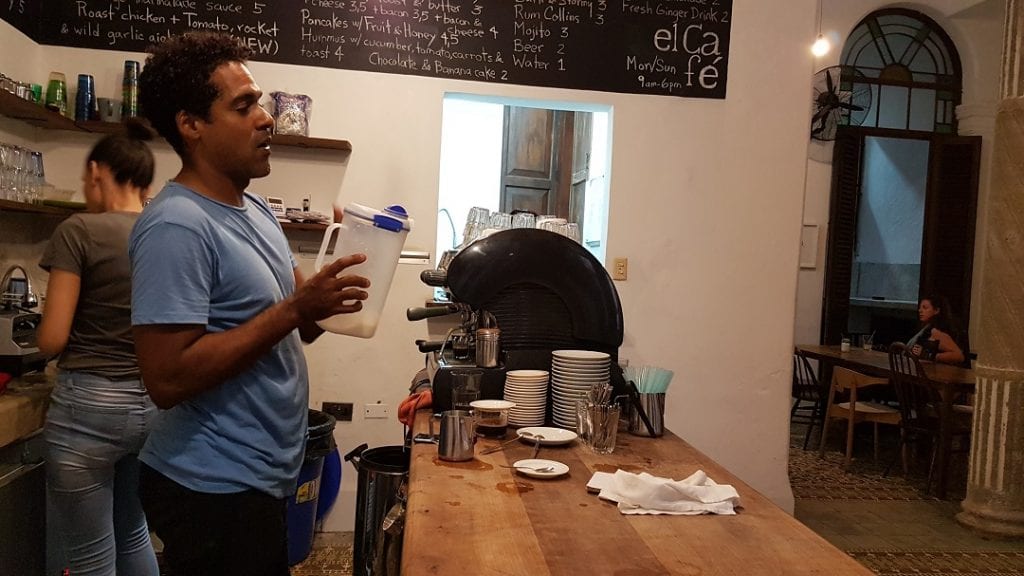 “In London, I was able to become a kitchen manager, a chef. You’d call up a company and you would have your order with everything you needed the next day. There, you needed to think about what dish you were going to create the next day; you had all the ingredients you’d want. Here, you have to ask yourself, what can I make with what I have?

“When there weren’t any eggs after the hurricane, I was put in a tough spot. How do I tell a customer that this is breakfast without eggs? We made a hashbrown, a potato patty that is traditional in the US. You eat it for breakfast with eggs and meat. I served the same breakfast and instead of eggs, I put hashbrowns. We made it out of sweet potato, pumpkin and chard because potatoes are [rationed] for Cubans and I don’t want to get mixed up in that [buying them illegally]. The biggest surprise I had was when eggs made a comeback and people were asking me where the hasbrowns were.”

At El Cafe, people who are lactose-intolerant or vegan can enjoy milkshakes and coffee combinations with oat milk. However, it’s difficult to find oat or soya milk in Cuba; when you do, it’s expensive.

“I can’t say “there’s oat or soya milk in the store, I’m going to buy 100”; then in three or six months, there isn’t any more and where can I get it then? I’m not going to start importing things either. Here, we make our own granola out of oats. I asked myself, how do you make oat milk? I looked it up on the Internet and we started making our own. 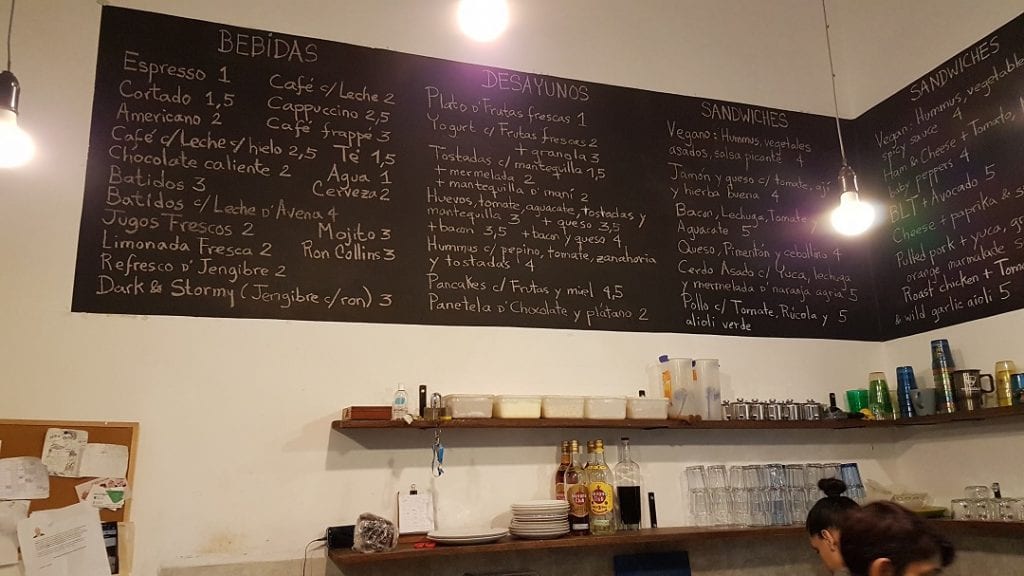 To make the granola, we buy oats, we put honey and nuts in it whenever we can. We have customers who live abroad or travel a lot; when they ask me what I want them to bring me, I always say almonds, raisins, these kinds of things. Then, we bake it all and that’s what gives it that crunchy texture. We also make our own peanut butter.”

And hummus too. First, they need to make the tahini. “Without tahini, it’s just chickpea paste, not hummus,” Nelson says.

Part of a chef’s job is to eat at restaurants and cafes. Nelson does this quite often and he believes that Cuban cooking has come to a standstill, places like Habana 61 being the exception. Another problem at some restaurants is that they serve dishes that have no relation to what’s on the menu.

“There are places where they serve you a Greek salad with a cheese that isn’t feta. It’s a better idea to write a salad with tomatoes, black olives and cheese on the menu. If you sell it without the ingredients it’s supposed to have, you’re either stealing from the customer, or you’re ignorant. Cuban chefs need to travel. Not only travel and eat in other countries, but also work in restaurants in other countries.”

He’s speaking from experience. In London, Nelson started off washing plates at a restaurant and he went up the ranks until he became a chef.

3 thoughts on “Havana’s “El Café”: Delicious and Something for Everyone”