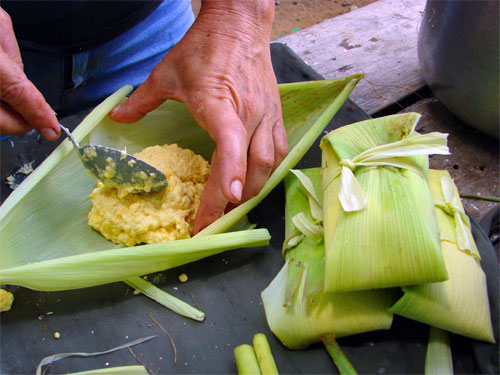 HAVANA TIMES, Sept. 24 — Whoever has visited the easternmost part of Cuba recently has undoubtedly tasted our exquisite tamales, one of the dishes most liked by residents of Guantanamo.

For Adelaida Perez Casas, a modestly living campesino from the mountainous municipality of Niceto Perez, it’s clear that the tamale (or hayacas, as they’re commonly called in this part of the country) is the dish for sharing in the company of one’s family.

September is the ideal period for preparing the noted Cuban creole dish made from green corn, a plant that originated on the American continent but was introduced to the island by the Spanish colonizers and has since then become a part of our culinary culture.

Rich in vitamins and proteins, corn possesses a high carbohydrate content that’s easily digested, making it food that’s ideal for daily consumption.  From it we obtain the most varied of our typical plates, ones like cornmeal, fritters, maize soup and the exquisite hayaca.

The Corn is also used for purposes such as making cosmetics, oils, mustard, mayonnaise, yogurt and ice cream.

“Working the land is not an easy task,” Adelaida assures us, much less cultivating and tending to corn in each one of its stages.  This is especially challenging because Niceto Perez is an area that receives little rain given its location on the coastal strip to the south of the city.

“Even so, we were lucky this year and were able to harvest enough to feed the barnyard animals in addition to a fairly large family,” said Adelaida.

Hayaca is the favorite plate of the family although it takes some work to prepare.  It has to go through several steps before cooking, in addition to needing to conserve the leaves of the corn to be able to wrap the masa (a starchy doe) and then boil it.

When the hayaca is ready, you pull back the leaf that wraps it, gives shape and allows it to conserve its pleasant and exquisite flavor.

Those who like this dish usually prefer it as a side to pork, which makes its flavor stand out and offers the diner a pleasant and typical Guantanamo creole plate.

Nubya Garcia– Song of the Day