Cristian Melendez, political prisoner, now transferred to house arrest, has scars from the torture he suffered in the “El Chipote” jail. 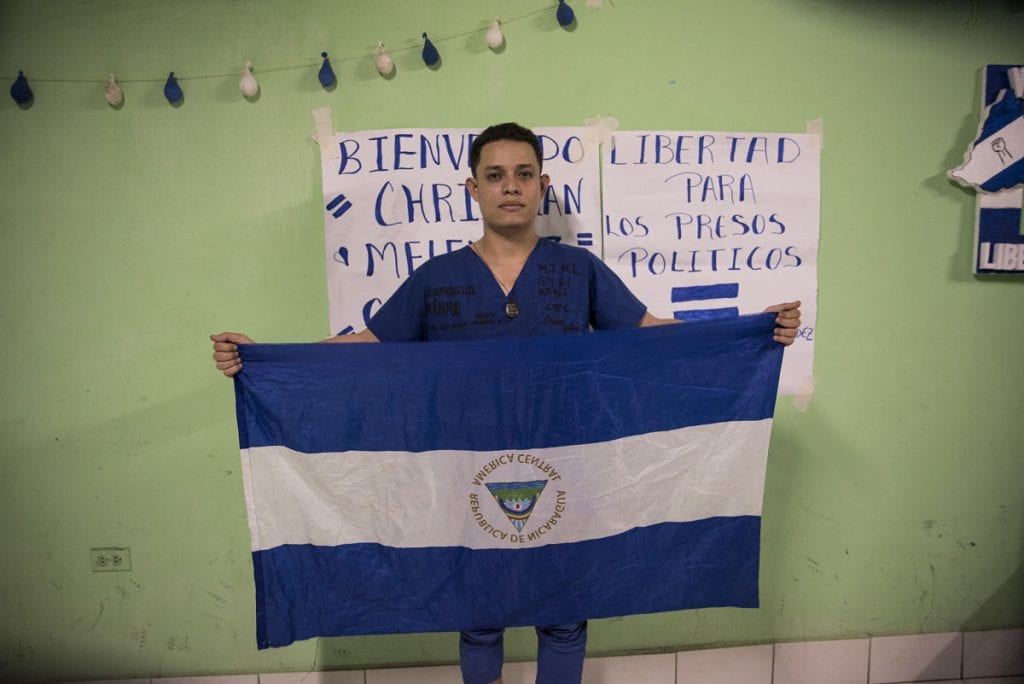 They imprisoned him for supposedly organizing some roadblocks that never existed in the town of Chichigalpa. To force him to confess, they gave him electric shocks.

HAVANA TIMES – “Crac, crac, crac” sounded next to twenty-three-year-old Cristian Melendez’s right ear as he stood with a plastic bag over his head. At the same time, two Police investigators were hitting him to get him to open his legs. Moments later, an electric shock surged through his testicles and his whole body. “I wanted them to kill me to stop the pain,” he remembers thinking.

Locked up in the “El Chipote” jail, this young political prisoner suffered these tortures as punishment for “not offering any useful information” to the agents.

The national police abducted Melendez from Chichigalpa, in the western department of Chinandega. He was beaten and tortured in the jail cells of the local police, again in the El Chipote jail, and still later at the La Modelo prison. After 138 days of incarceration, he was transferred to house arrest together with 49 other political prisoners.

Melendez was arrested with his partner, Claudia Campos Monjarretz. Both of them plus another youth, Gerson Suazo Baez, were accused of kidnapping, assault, injury, illegal arms possession and obstruction of public services in Chichigalpa. Melendez was found guilty of the latter charge and sentenced to a year and six months in jail.

“They charged me with obstructing the public roadway based on a roadblock that supposedly existed in Chichigalpa, an imaginary roadblock. They then used images from events in 2012 and false witnesses to convict me,” he affirms.

He was mistreated from the time he was detained. “Four patrols captured us; they beat us and threw us into the back (of a pick-up), where they aimed kicks at us. When we arrived in Chinandega, they stripped us and beat us some more,” Melendez recounted. “They said that they found a shotgun and gasoline on us, but they didn’t find anything, not even a telephone. We were coming from a protest vigil, because Gerson had been detained,” he added.

No blows to the face

The young man spent less than a week in the cells of the local police station, then was transferred to the Managua jail known as El Chipote. There, he suffered a torment of interrogations.

“When they took me out for investigation, they beat me, but not that hard if you compare it with what came later. They hit me with their bare hands or with billy clubs. They hit you on your body, but they won’t touch your face,” Melendez described.

“In the courtroom, they want to make it appear that you’re okay; if you’re in bad shape, they cancel the legal process or postpone your hearing. When they postpone your court appearance, it’s because you’re injured and they don’t want that to come out in the light,” he explained.

Punished for not squealing

The police wanted Melendez to tell them who was financing the protests in Chichigalpa, where they kept the supposed arms and containers of gasoline, and where the safe houses were. The young man remained steadfast that his only participation was at the marches. He was punished for his silence by a torture session.

“They took me to another room (different from the interrogation rooms) that was stained with blood. They put handcuffs on me, and raised my hands up. I was very nervous, because of the bloodstains and because they didn’t say anything, just kept silent,” he recalled.

“They put a bag on my face and began to suffocate me at the same time that they were hitting me in the stomach. I felt like crying. A whole bunch of things entered my mind, because they shot something near my ear,” the young man continued. “They began to say that they were going to take my boxers off. Since I wouldn’t let them and I got stiff, they hit my legs and tore my shorts.” The next thing he heard was the sound of a taser in his ear. “You could hear ‘crac, crac, crac,’” he asserted. Then he recalls “a huge pain all through my body. My testicles were burnt.”

He wanted to die

Melendez thought that the torture session had ended, but it was only halfway through. “I fell off the chair, and I didn’t even know that I had urinated on myself. While I was on the ground, they put the bag back on, and they kicked me again so that I’d get up, but I didn’t have the strength. Among kicks, they got me up.”

At that moment, there was only one wish in the mind of the political prisoner: “for them to kill me.” “I thought that if they were going to do something to me, then better to have them do it in one fell swoop so that I wouldn’t have to be feeling so much pain. Better that they kill me, and end the pain.”

Once back on the chair, the torturers once again put the “taser” on his testicles. “I felt that my entire spinal column was breaking; there was a burning inside of my internal organs, my mouth, my eyes, all over my body. I couldn’t walk for the pain in my testicles. I urinated on myself for nearly a month and a half, without knowing I was doing so.”

In El Chipote, the prisoners could ask for medical attention. However, the attention was limited to giving them pills for the pain or to sleep. “They don’t attend to wounds,” according to Melendez.

His time in La Modelo prison

After that torture session, Melendez was never again removed from his cell, until they transferred him to La Modelo prison at the end of November 2018. In that prison, Melendez was beaten by guards and members of the riot squad.

“The first time that anything major happened was on December 31 at midnight. We were singing the National Anthem, we held a minute of silence for the victims, and we also sang some Nicaraguan songs – first the prisoners from section 16-1 and later those in 16-2. So, then around 80 guards entered with their arms, beat several of us up, and threatened us that if we moved they’d kill us,” he recounted.

After that, in January during a general inspection, they destroyed all the prisoners’ food, which led to an altercation with the guards. “After the inspection, when we entered our cell again, we found out that all our food had been ruined: the cheese full of soap, detergent on the ground; the bread cut up; the milk spilled; the juice and the water poured on the ground. All of our food was destroyed,” he described.

“That day, we rebelled again, we began to kick the doors, to sing and yell. They (the guards) began to throw rocks at us from outside, and we threw pinol (cornmeal and cacao drink powder), sugar and oatmeal at them. At the time, nothing further happened, but by then things like that were beginning to occur,” Cristian Melendez noted.

The worst beating that Christian received in that prison was on February 19, during a transfer of cells. Some twenty prisoners took advantage of the fact that they were outside the cells to protest and sing the National Anthem. “Some guards and members of the riot squad began to push us to get us back in, but we put up our flags (of blue and white plastic) like shields. One of the riot squad members whacked one of us with his club, and then all of them began to attack us.”

“They began to hit us pretty hard, and they closed the gate because people (other prisoners) were coming out. When the others tried to open the door, they beat them on their hands, but they managed to open the gate. We were already very badly beaten, nearly passed out,” he highlighted.

The young prisoner ended up with a wound and a number of lumps on the head, his collarbone and his arms beaten, a swelling on his forehead, and black and blue marks on his back.

The beatings have left scars on Melendez’ body. Now out of prison, he’s had some medical exams and an independent doctor has confirmed the damage he sustained from the tortures.

An x-ray revealed that he has problems in the ligaments of his right shoulder; an ultrasound was done because he vomits blood, and showed that some of his organs, such as the liver, were injured; and an electroencephalogram, done because he suffers from headaches, revealed that he suffers from “a considerable lesion” on the right area of the brain.

“For the lesion, I’ll have to be in treatment for six months. During this time, the doctor will be following up to see if it improves. If not, I may need a stronger treatment,” he explained.

Emotionally, Melendez feels “happy to be out”, but “I have many mixed feelings,” he added, because at the same time it saddens him that his companions in the struggle continue “suffering that hell” in the jails.

Despite the lesions, the beatings, the tortures and the constant harassment by paramilitaries and police at his Chichigalpa home, the youth maintains intact his demands for freedom and democracy. “I’m not going to stop, this is going to continue. I remain firm in the struggle and we’ll keep going, no matter what has to happen. I love my country, I love living in Nicaragua, but in a free Nicaragua for all: that’s the Nicaragua that I want for myself and for all Nicaraguans.”