HAVANA TIMES — Orestes Barreira is the owner of a cafe and will soon be traveling to the United States to buy the household appliances, coffee, condiments and other supplies he needs for his business and fall within the narrow category of “non-commercial items” established by Cuban customs. Even when you add the price of the ticket, “when you do the math, you see that it’s much cheaper,” he says.

As he sees it, the possibility of importing from “over there” could be a solution to the yet unresolved issue of a wholesale market for Cuba’s self-employed. “The US businesses have many products we need: rice and meats that can be bought at a lower price because of shorter distances and transportation costs.” This hasn’t yet been authorized, and he knows he is fortunate in this regard. “I can do it, but what about people who can’t?”

In the meantime, the US State Department has published a list of (exclusively non-State) articles that may be imported from Cuba. Several US companies will be authorized to sell equipment, building materials and a range of supplies without the need to apply for a special permit. Cuban authorities have yet to make any pronouncements in this connection.

Beyond expectations and reservations, commercial ties between Cuba and the United States could hasten the “normalization” of relations between the two countries. For historical and geographic reasons, they are each other’s “natural markets.”

Under what conditions does Cuba’s foreign trade sector arrive at this longed-for moment? What prospects for sustained commercial exchange between neighbors are there? As interests at both ends begin to take form again, it’s clear that efforts will have to be made at either end.

This Side of the Ocean Drive

To describe the Cuban economy as “open” is to say that the country depends directly on foreign trade. According to calculations by researcher Nancy Quiñones, for the country’s GDP to grow by a percentage point, a 1.55 percent rise in purchases abroad is required.

Imports meet a considerable part of food, fuel and equipment needs and have a decisive impact on production and growth in general. Exports, on the other hand, guarantee inflows of hard currency that allow the country to purchase essential supplies. This makes Cuba fairly vulnerable to the ups and downs of the international market. The fall in nickel prices and the rise in food product costs are two recent cases in point.

A feature of Cuban foreign trade that has remained stable over time is the way it is organized in terms of sectors and commercial partners, something which creates a systemic risk factor. Currently, Venezuela and China account for half of sales and purchases abroad. As operations and access to these markets are “guaranteed”, it is hard to measure the real competitiveness and efficiency of the island.

These ties, like those with the United States, are maintained under rather atypical conditions: intergovernmental agreements, closed credit lines and “special licenses” for export.

Nickel and sugar account for the greatest incomes, even though oil derivatives, biotechnological products and the medical and pharmaceutical industries have shown positive trends over recent years.

Health services account for about two thirds of all sales, a phenomenon which reveals changes that prioritize the tertiary sector of Cuban exports. Incomes secured through these services (12.6 billion in hard currency in 2012) have allowed the country to make up some for its scant product sales.

“Only a handful of Cuban companies have government authorization to conduct foreign trade operations (…) The Ministry of Foreign Trade and Investment (MINCEX) applies additional regulatory mechanisms and restricts certain types of products that companies can import or export, depending on the sector and the concrete activities of the company.”

This is how Havana’s ProChile office describes Cuba’s foreign trade mechanisms, on the basis of a 2013 document titled Como hacer negocios con Cuba (“How to Do Business With Cuba”). According to the Chamber of Commerce, this year, the expanded importers and/or exporters list included 125 entities (chosen from the country’s 2,400).

“We must bear in mind that Cuban counterparts take a long time to make their decisions.” the ProChile document adds, “This must be considered when developing a business strategy.” This observation is confirmed by a number of problems that MINCEX has acknowledged.

According to the press, two years ago, MINCEX First Vice-Minister Antonio Luis Carricarte declared that the Ministry’s slow response time makes it impossible to take advantage of favorable situations, and production entities lack a comprehensive and flexible market strategy.

MINCEX Foreign Trade Director Vivian Herrera has also stated that the lack of communication between manufacturers and national clients lead to needless imports, owing to a lack of information about available domestic products.

That said, the main reasons behind this are the low productivity and de-capitalization of agriculture and industry, as well as bureaucratic, centralized and discretional mechanisms at work in these processes.

“If the Friday ship doesn’t arrive…” someone mused, referring to the vessel that arrives in Havana by sea every week at around 10 am, coming from the United States with frozen chicken, soy, corn and other food products.

Despite the embargo restrictions, by virtue of the Trade Sanctions Reform and Export Enhancement Act (TSREEA) approved in 2000, US companies “privileged” with licenses to export to Cuba have placed the United States among the island’s top ten commercial partners and among its main food suppliers. The Cuban Democracy Act (CDA) approved in 1992 also allows for the sale of medications and medical instruments and equipment.

All of this takes place under diabolical conditions which involve high extra payments for delays at ports and the requirement to pay in cash and in advance. According to Jorge Mario Sanchez, professor at the Center for International Economy Studies (CIEI), such payment methods make Cuba “the only country in the world which a high financial risk classification and, at the same time, cero effective risk in operations with US exporters.”

According to a report publish in March by the US-Cuba Trade and Economic Council, since 2001 total sales to the island (including those foreseen for this year) are over and above five billion dollars. 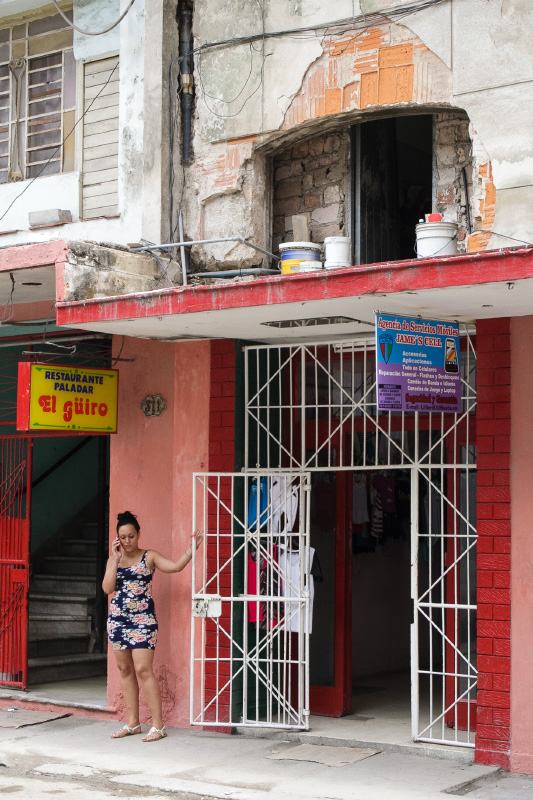 The leaders of the Agricultural Coalition didn’t waste any time and took the first step, assessing the potential of the Cuban market and establishing business contacts. The combination of US supply and Cuban demand, in conjunction with the background to these dealings, make agribusinesses the spearhead of this commercial rapprochement.

“The first thing we would have to bring over is agricultural instruments, tractors and plowing implements,” stated Darlene Mantecon, member of the Credit and Services Cooperative in Guaimaro, Camaguey. That said, she confesses she does not feel very optimistic. “We know relations are going to make headway at the business level, but I think getting those benefits to the population is going to be a long process.”

There’s also uncertainty regarding the possibility of exporting ceramics, skins, jewelry, footwear, manufactured products and other articles included in the State Department list. Those interested will only be able to purchase these products from the self-employed, as “professional” crafts are sold through the Cuban Cultural Products Fund and similar institutions.

“The problem is that the United States may not want to deal with these institutions,” leather craftsman Jose Antonio Bormey points out. “The percentages and several other things could be negotiated, but the only mechanism that has existed to date is that one.” Agreeing with the CIEI researcher, he adds that “this is a context in which inertia and innovation co-exist.”

Sanchez suggests that we may now see an “overraction”, an avalanche of visits and offers prompted by many different reasons: curiosity, strategic considerations, etc. However, after some time, their attention will fade because of differences in the country’s business culture, the time and costs of implementing initiatives, Cuba’s institutional structures and other factors. “Generally speaking, US businesspeople are not in a condition to adapt to the pace with which we negotiate, not in the short term, at least.”

Potential areas for mutually beneficiary trade are being explored, in addition to traditional products (tobacco, rum and fruits), biotechnology, medical services, telecommunications and oil-related activities (the re-export of derivatives and prospecting in the Gulf of Mexico).

Different assessments suggest that the most immediate financial results will come from tourism and remittances. Reports issued by Visit Florida maintain that more than 40 thousand vessels are being prepared to travel to Cuba and back in a nautical day. Jose Luis Perello, professor at the Faculty of Tourism of the University of Havana, speaks of tendencies such as “nostalgic trade” and “ethnic tourism,” related to the sale of domestic product and frequent visits by foreigners.

“There will be other more indirect effects, and they have to do with the signal being sent to the international economic and financial community by the reestablishment of relations between the two countries,” economist Pavel Vidal wrote. “(…) Nevertheless, to know the speed and magnitude of this impact, we will have to wait for the regulations and implementation details to be issued.”

The road is still blocked by Cuba’s difficulties in terms of accessing financing, the still prohibitive legal framework in effect and little confidence that exists today. Gradualness and caution seem to be the slogan of current changes. As the old folk might say, if you want peace, prepare for war.