HAVANA TIMES — “We fill forms and safeguard handbags and cell phones!” calls out a woman standing at the head of the line, which is not a line but a continuum of people who fan themselves, sweat, talk on the phone, hold their foreheads, glance at their watches, talk incessantly, meditate and think again.

No wonder they call it “the Park of Sighs.” Maybe it’s bad taste that the US Embassy is so close to a funeral home. “Creepy,” someone might say, if this were a movie.

About 200 yards away, behind a cafe counter, Zenaida (not her real name) laments how tranquil the environment is. “Not too long ago,” the employees of the former SINA — the U.S. Interests Section — had their lunch hour trimmed and now they have no time to come over for a cup of coffee.

A group of maintenance workers paint the masts of the over a hundred flag poles that were once constructed to block a news ticker on what is now the embassy building. Others paint the nearby buildings along Calzada Street. Even while it was the US Interests Section, many still called it “the American embassy.”

“Life remains the same,” says Gonzalo, a parking attendant, who says that the consular office has handled fewer visa applications in recent days, because a container with new electronic equipment arrived “and inside everything is computerized.”

“They’re waiting for that gentleman to come on the 14th,” he says, alluding to Secretary of State John Kerry.

Tourism vehicles, private cars and state-owned cars use the parking lot, where service is fifty cents or a CUC (usd) more expensive than in other parking places. “At the corner restaurant, they charge 3 CUC for valet parking. They take your car, park it somewhere and then return it to you,” says Ramón, interrupting his work selling tamales on his bicycle. 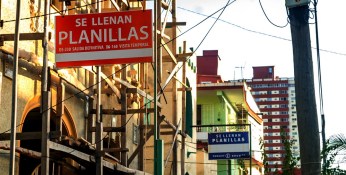 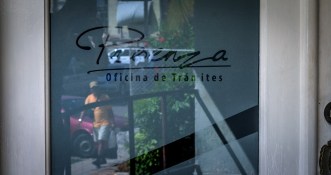 The neighborhood shows its many faces. The residential Vedado, the decadent Vedado, the poor Vedado, the Vedado under construction.

Everywhere, you find houses where the residents fill visa applications for 20 dollars. “Serious and guaranteed,” says a sign, next to another that says “Instant photos; no charge,” included.

Inside, the impromptu “paperwork offices” are equipped with everything that’s necessary: scanner, printer, photocopier, a still camera. There may be too much competition but so much supply means only one thing: lots of demand.

When did they get the idea for this line of business, I ask. How many people come here each day? Have things changed since Dec. 17? Will things be different now that this is an embassy? Despite the signs, almost nobody answers.

“No, I’m not interested,” a young woman tells me from behind a computer. On the wall, a diploma identifies her as a Graduate in Social Communication.

In a two- or three-block radius, coffee shops proliferate like mushrooms. “I’ve got food!” shouts a woman wearing a headband and a lycra outfit with the Stars and Stripes. At a glance, she seems to be wearing a uniform.

Around me I see telecommunications agents who sell phone cards; others promote rooms for rent in convertible pesos or Cuban pesos, street vendors and of course the “Taxi, taxi!” several people are shouting. Safekeeping your handbag will cost you 1 CUC until 5 p.m. “or whenever,” Dinora tells me.

People wait in bunches, they make themselves as comfortable as possible; any container serves as a seat, any tree or door serves as protection from the sun. There are many ways to wait. Some people come from far away, very far away.

“We showered and rested a while. Now we’re going to Coppelia (ice cream parlor). Wait, I’ll put your mother on,” a man over 60 speaks into his cell phone. A child gets restless — maybe because of the heat, maybe because he’s sitting in a wheeled baby carrier — and cries. The line doesn’t seem to move. “Listen, it’s Dayana, Luis’ sister. No, we’re still waiting.”

According to official sources, about 1.4 million Cubans (12.5 percent of the nation’s population) live outside the island, 85.7 percent of whom live in the United States. In 2012, 47,384 Cubans left legally for that country; 80,522 in 2013, for the purpose of family reunification or for non-emigration visits. All of them came through here.

A Lonely Street, Old Havana – Photo of the Day