HAVANA TIMES – Co-coordinators of the Hands Across the River event were stunned. They’d hoped two hundred people might show up on Sunday to show their concern for the San Pedro River in southeastern Arizona. Instead, nearly a thousand persons turned out to display their love for the river that flows from Mexico into the US state of Arizona. It is the last free-flowing river in the western United States.

Elizabeth Lopez and Jeff Sturgess, both of Bisbee, Arizona, are lovers of the San Pedro and organized this action to call attention to its importance. 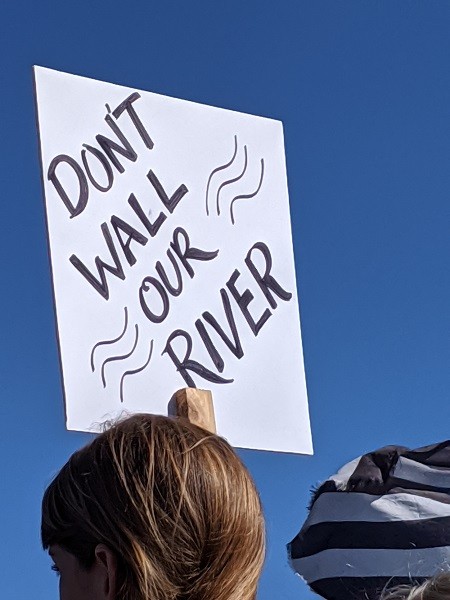 First, the group formed a human chain across the river. They stood for only a few minutes because their presence blocked traffic across the one-lane bridge.  Then they gathered near the river to hear several people speak about the importance of protecting the river.

The San Pedro River is extremely fragile because it’s in a desert area of only seventeen to nineteen inches of rain yearly. It is further endangered due to numerous wells drilled to accommodate an ever-increasing population in the area.

Although the river is not much more than a lazy stream from late fall through early summer, the mid-summer rainy season causes the San Pedro to run fifty or more feet wide, and the force of the river carries debris, tree limbs, and even downed trees up the river.

And it is this river that the federal government wants to destroy by running a steel wall through it at the border with Mexico.

The Hands Across the River action was not a politically partisan event, as evidenced by the wide range of people and beliefs represented. Across the entire political spectrum, far right to far left, people stood because of their love of the San Pedro and their belief that the wall would destroy it.

Tricia Gerrodette spoke of the importance of local residents caring about their environment and speaking up to protect it. Tricia, a Cochise County resident, is a long-time advocate for the San Pedro River. In 2018, Ms. Gerrodette won the Sierra Club’s Conservationist of the Decade for her work on rivers and especially the San Pedro River. “Join a group,” she said, “donate if possible, and speak up to all your representatives at federal, state, and local levels.”

“This is the biggest group I’ve ever seen come together here!” said longtime area resident, Michael Gregory, a key person in ensuring SPRNCA, the San Pedro Riparian National Conservation Area was approved in the 1970s. He concluded saying, “The wall is an environmental disaster and biological obscenity.”

Billy Kovacks is a staff member for Congresswoman Ann Kirpatrick. He read a portion of the letter she recently sent to the Acting Secretary of the Department of Homeland Security. In it she said plans for the wall should be available for review at all levels of government and should also be made available for citizen review and comment.

“The decimation of our wildlife and our communities will be horrendous,” said Roger McManus. He was CEO of the Ocean Conservancy for twenty years and now serves on the board of the Friends of the Sonoran Desert.

The Hands Across the River action was called to protest the US government plan to build a wall on the border across the San Pedro River in its effort to keep undocumented people from crossing the border into the US. Throughout the country, people oppose this idea because of the environmental damage the construction will cause.

Additionally, a steel barrier isn’t necessary because heat and motion sensors can be used more effectively. There are already cameras monitoring the area. Using sensors would also cost far less than a wall and would not damage the environment nor interfere with animal migration.

Currently, there is a wall on each side of the river but only a steel vehicle barrier running across the river. However, the US government has waived numerous regulations and approved a steel wall to cross the San Pedro, and construction is expected to begin soon.

Regulations waived include The Endangered Species Act, The Federal Water Pollution Control Act, and The Wild and Scenic Rivers Act. 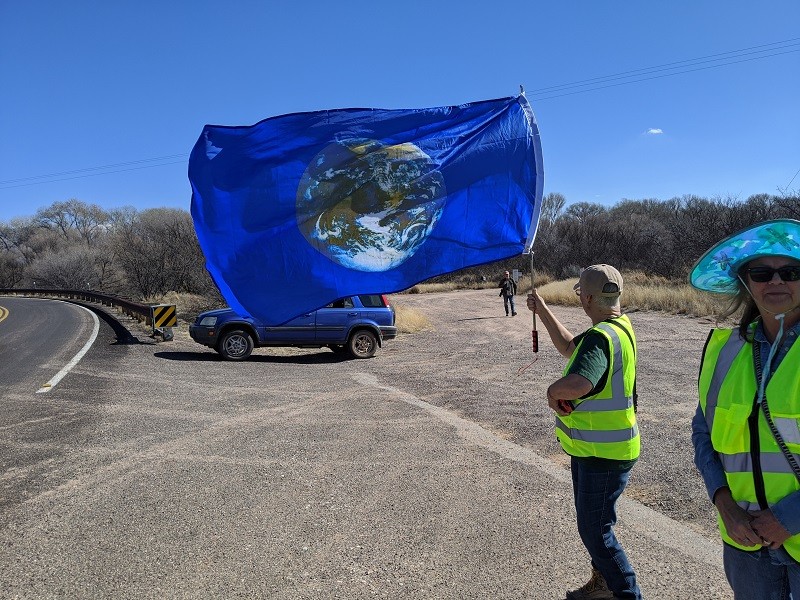 Just east of the river, wall construction has already destroyed artifacts from ancient Native American tribes who lived in the area. Had the Archeological Resources Protection Act not been waived, the artifacts there would have been properly excavated and preserved rather than being destroyed.

In all, forty-one laws or sections of laws were waived in Arizona in order to construct the wall. Ten of those waived focus on allowing construction near or in the river.

This seasonal flooding is what makes the danger of the wall so great. 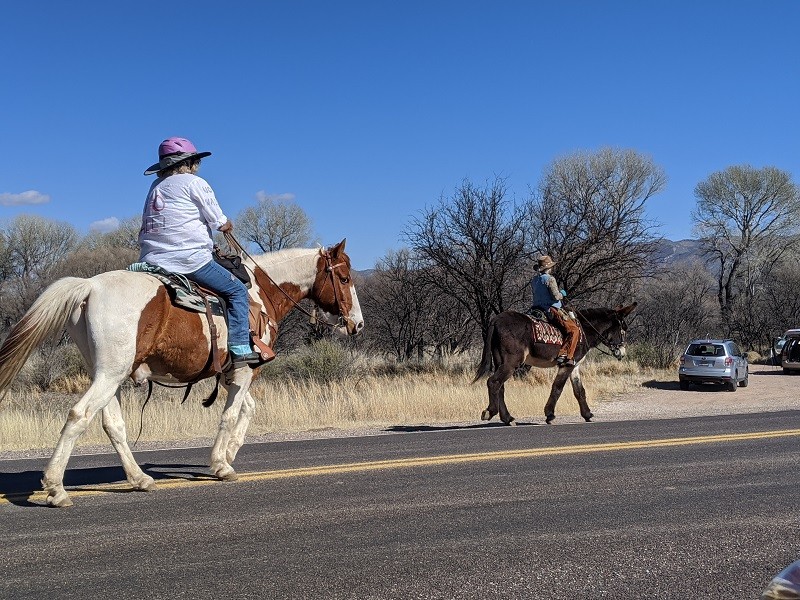 According to Jeff Sturges, co-coordinator of Sunday’s event, “This section of the wall will cross the SPRNCA (San Pedro Riparian National Conservation Area) at the border, causing ecological devastation by stopping the free flow of water, causing debris buildup and flooding, while preventing wildlife from crossing.”

SPRNCA is a well-known eco-tourism destination because of its wildlife. Eighty-one animal species call the area home. Also, the San Pedro is home to hundreds of birds, including over one hundred species that nest there. The river is also the main flyway for migratory birds moving between the US and Mexico, with nearly three hundred species using the route.

2 thoughts on “Mexico-USA: Well-Attended Rally to Save the San Pedro River”