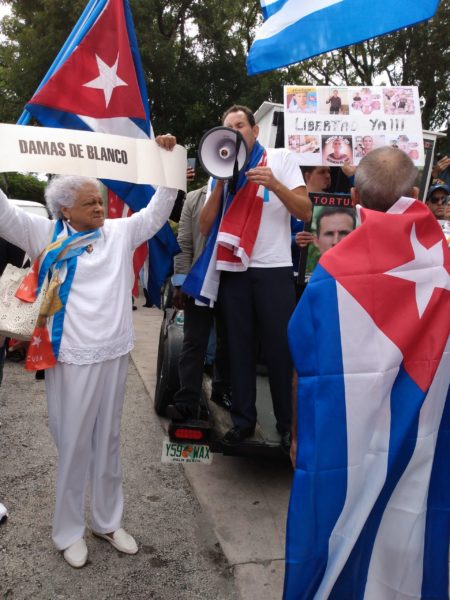 HAVANA TIMES – The bright midday sun burns people’s eyes on Calle Ocho (8th St.) in Little Havana, as if we were in Cuba more than in front of Versalles in Miami, “the most famous Cuban restaurant in the world.”

On the sidewalk out front, a group of people completely indifferent to ajiaco stew, vaca frita (fried beef) or arroz moro (rice and beans), shout: Down with Castro! If we come together, they will fall! The dictatorship will fall!

Gestures and words leave no room for doubt, they are Cubans, although they normally join forces with other Latinos from Miami’s multinational community, who believe they are the victims of the monster that was born in Havana 60 years ago.

Young people lead the charge, a renovation trend in political terms, although there are always veterans too such as Ma Elena Alpizar Ariosa, dressed with the decorum of the Ladies in White, who defines the philosophy of the protest: “I only have one enemy, Castro Communism.”

In recent weeks, we have seen the active presence of Luis Enrique, a former political prisoner and the brother of Jose Daniel Ferrer Garcia, whose name is known the world from the campaigns demanding his freedom. He’s at the top of a list of political prisoners which is over 120 names long, including women, whose detention on the large Caribbean island is cynically denied by the stubborn, lying and demoralized Cuban government.

Protesters were also demanding a humanitarian visa for Lady in White Xiomara Cruz Miranda, who had been a prisoner of the dictatorship up until a few weeks ago, released when an illness of an uncertain diagnosis and shady origin began to eat away at her life in Havana.

Ferrer and Xiomara’s stories aren’t the only ones, but they symbolize a harsh reality that a wave of protests led by Cuban-Americans (almost two million) attempt to tackle. On Sunday December 8th, people from Sun City went to Orlando by bus, where a group also arrived from Tampa, on Florida’s west coast.

Luis Enrique Ferrer has proposed that growing enthusiasm further north, as far as Jacksonville, on the border with Georgia join these efforts. Likewise a healthy representation of these Cubans led a noisy protest a month ago in front of the Cuban Embassy in Washington.

A leader hasn’t been identified yet, some people take care of the snacks, others make a note of donations for basic expenses, for example, transport, and the best voices shout the phrases that synthesize basic demands, which echo needs of reality in and outside of Cuba.

Rightful indignation at the absolute defenselessness of the political opposition in Cuba takes center stage. Xiomara refuses to be admitted into hospital because she is afraid to leave her life in the hands of doctors who are capable of betraying the Hippocratic Oath if they are threatened by State Security, and she’s right to be afraid. There is a history of this in Cuba.

Jose Daniel has been held prisoner and in solitary confinement since October 1st; he was given five minutes with his wife, 35 days later, and more recently, a couple of minutes with the Archbishop of Santiago de Cuba, Monsignor Garcia Ibanez. Ferrer, the leader of the Patriotic Union of Cuba (UNPACU) hasn’t had access to a lawyer up until today, yet he has been accused with a common crime, linked to injuring another person.

The large Cuban community in Florida is becoming aware of its power, says Alexander Ota Ola, one of the so-called “influencers” nowadays, who has thousands of followers watching his YouTube program every afternoon.

Massiel, Junior, Yeslier, Lety, just to name a few of the young names, are present every Sunday on Calle Ocho, multiplied by thousands of cellphones among millions of Cubans.

We send money, clothes, food, we top up phones, and the parasitic and repressive Government controls all of this.

Not even the tourism sector or doctors [on government contracts] manage to bring in the over six billion USD per year that the diaspora community do with remittances without any cost.

The new president who they appointed without consulting the people, has called us bastards, we are foreigners when it comes to the Homeland.

We have done the math, we do have power, we can change things. Change is now!

Ota Ola regularly visits the hot sidewalk outside Versalles, his complaints are marked by irony, mocking, sarcasm, but with irrefutable evidence too.

The charismatic conductor does what he can with a simple stage. Videos, phone recordings, documents and testimonies expose the Castro family as well as their collaborators, not to mention the opportunists who come to the US under the shelter of democracy, only to return with suitcases loaded with merchandise to sell that the Cuban government’s monopoly retail stores are unable to stock.

Recently, singer Haila, who previously declared herself a fan of Fidel Castro, experienced the scorn of hundreds of people in front of the place chosen by the people who contracted her. The performance was canceled, the artist said she was in a state of shock.

The complaint is called reciprocity in democracy. Lawmakers sitting in Revolution Square decide, according to their political criteria, who can and can’t enter Cuba, blackmailing the emigre community with the threat that they won’t be able to embrace their loved ones in the Homeland.

Famous members of the opposition have spoken of stopping family remittances in January. Knowing that it won’t be enough to try and overthrow the dictatorship, the dilemma lies in sacrificing your family for a month.

The boycott could be a good beginning. Many remember Rosa Park’s action, which was inoffensive back then?

Sceptics are still the majority. Fidel Castro knew how to plant the seed of fear within the Cuban people of a repressive system with a reputation abroad of being safe.  Added to this, the rebels have made many mistakes in the past. Old members of the opposition are dying with the dubious glory of their failed struggle.

Meanwhile, Havana is burying the people who believe they are winners, surrounded by rubble, in a country whose social decomposition is advancing as well as the evilness of the people ruling over it.

12 thoughts on “Miami Rises Up against its Age-Old Enemy, Castro Communism”