According to Cid Gallup Firm, 61% of Nicaraguans demand Ortega and Murillo Step Down

“Support for Ortega goes from 23 to 34% and no longer reaches his 38% threshold”, says Nicaraguan politician Eliseo Nunez. Murillo has the lowest public rating with –36%.

HAVANA TIMES – A survey made by the Costa Rica based polling firm CID Gallup between September 6 and 18, the results of which were presented on the Esta Noche news program, showed that the percentage of Nicaraguans demanding the ouster of president Daniel Ortega and vice president Rosario Murillo increased from 57% in May to 61% in September.

One individual per household was interviewed in a sample of 1200 households distributed all over Nicaragua. The sample was demographically representative of the adult (16 and older) population of Nicaragua. The survey results have a +- 2.8 point margin of error for a confidence interval of 95 percent.

Fifty six percent of respondents disapproved of the tenure of Ortega and Murillo and 60% replied that early elections should be held in 2019.

According to Eliseo Nunez, a former parliamentarian and member of the opposition group Frente Amplio por la Democracia (FAD), the number of Nicaraguan demanding the ouster of Ortega and Murillo has increased because of the state sponsored killings of people demanding justice and regime change. According to Mr. Nunez, in a functioning democracy, any president would have resigned long ago. Furthermore, the president has not proposed a tenable solution to a crisis that has claimed the lives of more than 300 people.

Ortega is below his Minimum Threshold

“One thing you see in this survey are Ortega’s minimum and maximum thresholds. His support fluctuated between 22 and 34% maximum. He no longer has his 38% minimum threshold. Now he has gone below that. The problem is Ortega couldn’t care less about legitimacy which he has foregone to keep himself in power at all cost”, said Mr. Nunez.

Furthermore, according to Nunez, Ortega has shed all pretense of being a “good president” for his grip of state power. “Each and every day, he is willing to do whatever it takes to remain in the seat of power the next day”, said Nunez.

According to the Cid Gallup survey, 33% of Nicaraguans believe Ortega is doing a “very bad job” and 24% a “bad job”. Overall, 57% of respondents have a negative perception of the president whereas only 25% still have a positive perception of him.

For Mr. Nunez, these results are a severe blow to Ortega’s domestic approval. “His mantra of economic efficiency was nothing but an illusion” said Nunez, noting that the years of bonanza [with massive funds from Venezuela] did not translate into the desired levels of economic growth.

“In his first decade of rule, Nicaragua’s annual growth was 4.2%. What does this mean? That Ortega was not efficient. Though people may not be aware of the numbers, people sense that the crisis is the effect of Ortega’s mismanagement of the economy. Add to this, his willingness to repress, shoot and incarcerate people, which he used to do more selectively, and then you have the results shown in the survey”, said Nunez.

When it came to political parties and leaderships, 67% of Nicaraguans polled indicated that they did not identify with any of the traditional political parties. The approval for the ruling FSLN plummeted to 23%, the PLC to 4%, the PLI to 1%, the PC to 1% and other fringe political parties had the remaining 10%.

The public figures with lowest public opinion ratings in the country were vice president Rosario Murillo, who headed the list with -38%, followed by Maria Fernandez Flores, parliamentarian and wife of former president Arnoldo Aleman, with -33%, national police chief and commissioner Francisco Diaz with -21%, and chief army general Julio Cesar Aviles with -10%. The public figures with the highest ratings were Nicaraguan singer and songwriter Carlos Mejia Godoy with +56%, cardinal and archbishop for Managua Leopoldo Brenes with +44%, the auxiliary bishop of Managua Silvio Baez with +36%, and student leader Lester Aleman with +29 percent.

Other figures with positive public opinion ratings were Nicaraguan business magnate Carlos Pellas with +19%, Cristiana Chamorro, president of the Violeta Barrios de Chamorro Foundation with +16%, Michael Healy, head of the large farmer union UPANIC with +16%, Juan Sebastian Chamorro, head of the business think thank FUNIDES with +15%, Jose Adan Aguerri, head of the umbrella business group COSEP with +12%, Ernesto Medina, president of the Universidad Americana (UAM) with +12%, and Maria Nelly Rivas, head of the Nicaragua American Chamber of Commerce (AMCHAM) with +12%.

Cid Gallup also asked respondents if they would support Jose Adan Aguerri, Cristiana Chamorro and Michael Healy as presidential candidates against Daniel Ortega or Rosario Murillo. Whereas 79% of respondents indicated that they would not support anyone or said they did not know, Aguerri received eight percent of support, Chamorro seven percent and Healy six percent.

The CID Gallup’s survey also showed that 35% of Nicaraguans see the political crisis as the main problem affecting the country. The cost of living comes in second with 27%; unemployment comes in third with 13%, and 12% of Nicaraguans fear for their children and governmental repression.

According to Mr. Nunez, these results show that the country has not entered a state of generalized crime, with people seeing the government as the main source of safety problems.

“If you add the last 12%, you literally have half the population fearing the state. This tells you that the government is not fulfilling its mandate of public safety. The question is whether the government is at all interested in the safety of Nicaraguan citizens”, said Nunez.

Unemployment came in third as a source of people’s concerns. Mr. Nunez interprets this as showing that Nicaraguans care more about “life and liberty”.

The Role of the Government, the Catholic Church and Citizens

CID Gallup also inquired respondents about the role of the government, the (catholic) church and citizens. Sixty three percent said that the police does not protect the people; 71% stated that those who participated in marches and barricades are not terrorists; and 79% disapproves the government’s persecution of independent journalists.

Regarding the role of the Catholic Church as a mediator of the conflict, 64% of respondents stated that it is very good, whereas 27% said it was mediocre or bad. “What you see here is the state of public opinion on different players and issues. Sixty four percent of Nicaraguans support the Catholic Church, 60 to 70% are against Ortega and around 30 to 34% maximum still support the regime”, said Nunez. 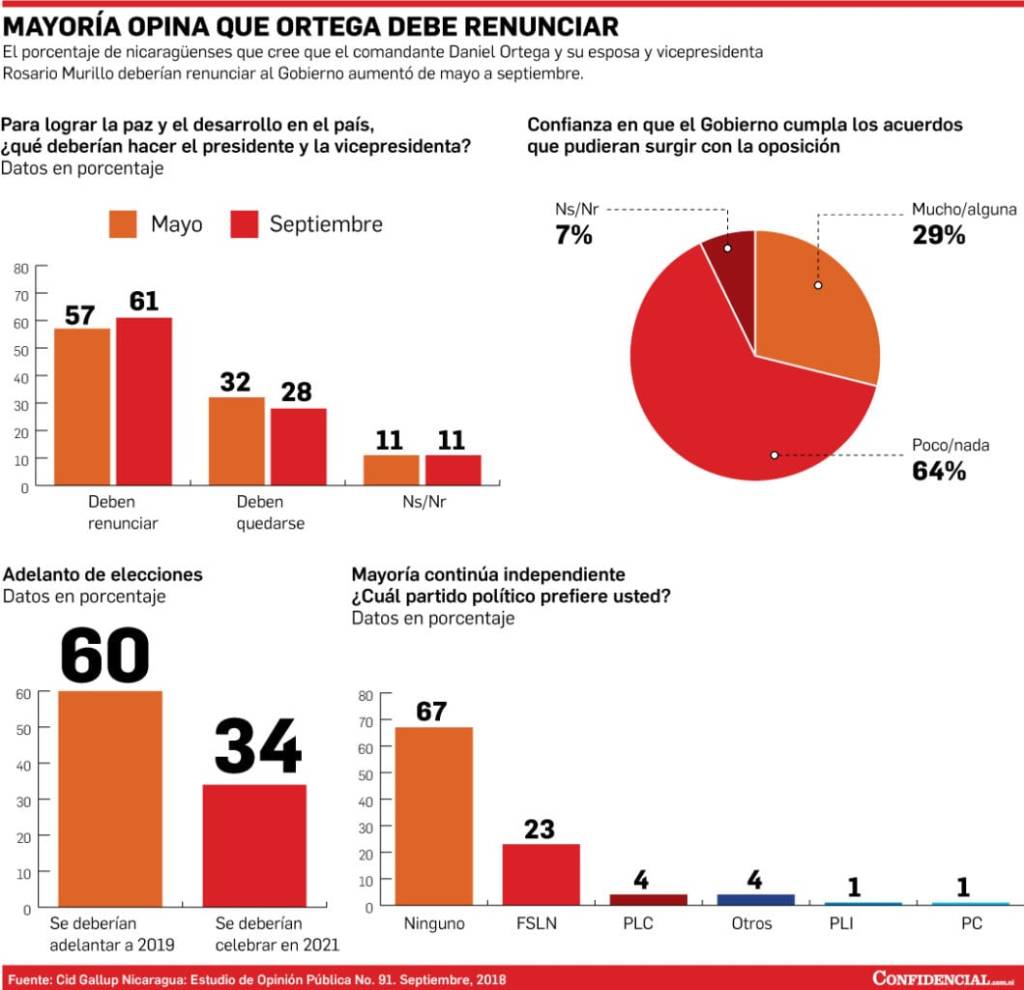