Some 80,000 Nicaraguans have fled to Costa Rica

Persecution, harassment, death threats and fear, are among the reasons that led thousands of Nicaraguans to leave their country, according to study

HAVANA TIMES – Eight out of ten Nicaraguans exiled in Costa Rica would return to the country, according to a study by the Arias Foundation, which highlights that persecution and harassment, death threats and fear, are the main reasons why Nicaraguans fled.

The research, carried out by the Nicaraguan sociologist Elvira Cuadra and retired major of the National Army, Roberto Samcam, indicates that unlike other migration waves of Nicaraguans in Costa Rica, this group of exiles has no intention of remaining in this country. In fact, 88% affirmed that they plan to return to the country after the departure of dictator Daniel Ortega and only 12% considered the idea of remaining where they are.

Upon their return to Nicaragua the exiles have the expectation of finding a country with a series of political conditions related to the reasons that forced them into exile, among them, living in democracy (29.9%), living with justice and freedom (28%), continue with their life, studies and work (19%), live free of paramilitaries and repression (14.1%), according to the document.

The publication, entitled “From Repression to Exile: Nicaraguans in Costa Rica,” reveals that 38.3% left as a result of persecution and harassment, 25.7% fled for death threats, and 18.9% said that they were afraid and only 13.2% adduced economic reasons for their displacement.

During the last decades there has been several waves of migration of Nicaraguans, for political and economic reasons. In the 1970’s, in the context of the Somoza dynasty, and in the 80s, because of the internal conflict between the Sandinistas and the contras. Costa Rica has welcomed the waves and has almost always had an open-door policy for migrants.

In this new wave of forced migration, the largest number arrived in July (33.8%), August (15.8%), shortly after the Operation Clean-Up, which was led by the National Police and by the paramilitaries at the service of the dictatorship of Ortega and Rosario Murillo.

In November another 17.7% arrived, after another critical period, which coincided, according to the Inter-American Commission on Human Rights (IACHR) with the third stage of repression, one that was characterized by a more selective repression. More than 60% of citizens arrived to Costa Rica via informal land routes, that is, on foot or in vehicles and through rural roads.

“Thousands arrived during the last ten months. There is no accurate estimate of the number of people who have sought refuge. The President of Costa Rica in a statement estimated the figure at 80 thousand. Other migration officials have commented that they have received 50 thousand requests for refuge,” says part of the study presented this week in Costa Rica, which clarifies the distinctive feature of the nationals who have arrived since April is that all have suffered directly from the situation of repression and governmental violence.

Profile of the exiled

The research was built on the basis of the application of a questionnaire to 382 people, over 16 years old, who arrived in Costa Rica, in dates after April 2018. The research emphasizes that, considering that it is not known with precision the exiled population, we chose to select a sample applied through interviews conducted between February and March of 2019. The margin of error is of 5% and the level of confidence is 95%.

The study reveals that 65% of exiles are men and 35% are women. Nationals forced out of the country are mostly young and are in the age range of 16 and 30 years (63%). “The data shows that the great majority is in full productive age, which is not being used in Nicaragua or in Costa Rica.”

Within this group of exiles, according to the same study, 53% have a university academic level, 29% are high school students, 11% are medium and high-level technicians, and 7% have an elementary school education. This new wave differs from other migratory waves, which have had as a characteristic people of lower academic level.

“The data reveals that there is an important brain drain that will have a detrimental effect on the country’s development in the short and medium term, because there is no guarantee that these people will return to Nicaragua. For Costa Rica, it represents a new high-level labor force, however, at this moment such a force is untapped,” says the study.

The majority of exiles in Costa Rica come from Masaya (17.2), Managua (16.9) and Carazo (16.7). Although there are important percentages that indicate that Nicaraguans came from all the departments of the country, including the Caribbean Autonomous Regions. 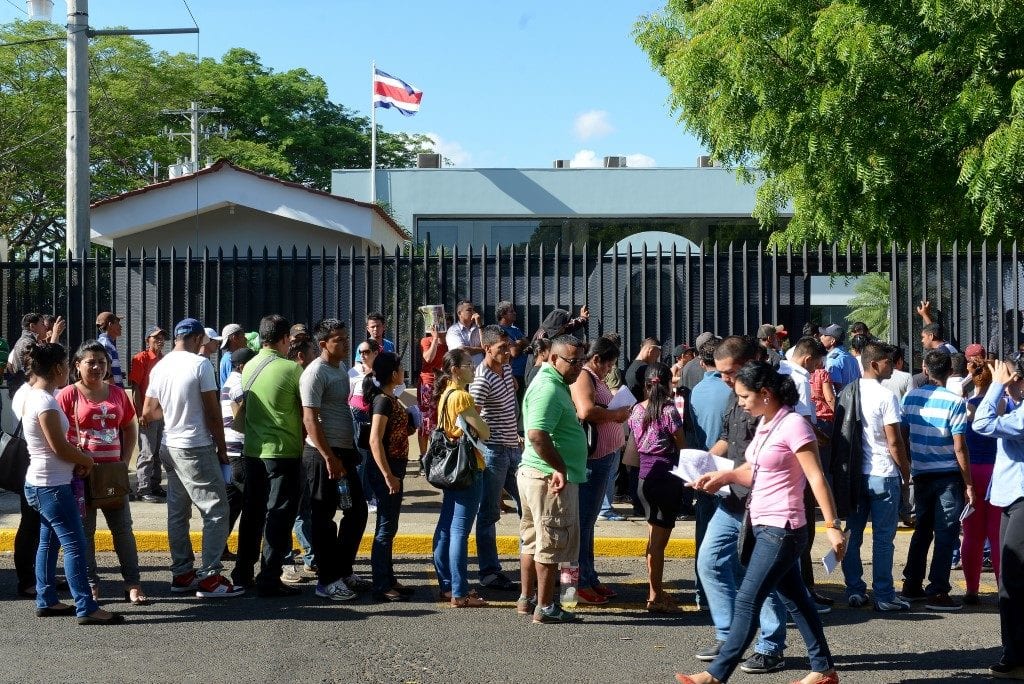 Unlike other migratory movements of Nicaraguans, exiles who arrived in Costa Rica in the last year have settled in places different from the urban settlements where migrants traditionally arrive. An estimated 83% are in San Jose, the remaining 17% in the provinces of Heredia (8%), Alajuela (5%) and Cartago (4%).

Most remain mostly in San Jose because they relate the capital with the fact that the most activities linked to exile take place in the capital of the country. Also, because the networks of friends created from the moment of their arrival, is in this same place and because this is where most of the organizations that provide humanitarian assistance are located.

Regarding the migratory status, 65.4% affirmed that they already have the refugee application card, 24.56% said that it is in process. 44.4% already have the necessary work permit and 55.6% still do not have it.

Since their arrival, Nicaraguans have experienced a series of difficulties and experiences in Costa Rica. The most important are linked to the conditions related to their exile and the way in which their forced displacement took place. 37.7% complain about lack of employment, 20.1% live with limitations, 17.4% have suffered xenophobia and 12.1% said they have housing problems. They also point to positive situations such as the being able to express themselves in democracy (5%) and Costa Rican solidarity (4.1%).