Ten months after the social outbreak against the dictatorship, triggered by the students, more than 30 university activists and spokespersons of the student movement are in jail.

HAVANA TIMES – Among the 767 political prisoners of the dictatorship, more than 30 are university students who in April 2018 left the classrooms to take to the streets, in protests against the arbitrary acts of the regime of Daniel Ortega and Rosario Murillo.

In the unstoppable hunt, unleashed after the bloody “Operation Clean-Up” to dismantle the roadblocks installed by the population in defense of paramilitary attacks, dozens of young people have been imprisoned in different cities of the country.

The students who demanded an end to repression, respect for university autonomy, justice without impunity and early elections in a free and transparent process, have been treated as criminals by the dictatorship, which fabricates crimes of terrorism under the argument of an alleged failed “coup d’état.”

The students were then cornered under bullets for more than twelve hours in the Divine Mercy Church, and two of them died that day. Now, nine survivors of that paramilitary attack have been jailed and sentenced under the catch-all terrorism law.

During, more than four months, Niu Magazine (Revista Niu) has published dozens of profiles to tell the human stories behind many of the political prisoners, among them several of these thirty students, whose list has been organized according to the area where the youths were arrested.

He is one of the most recognized faces in the civic marches, in which he distinguished himself for wearing his characteristic hat of blue and white cloth. He graduated from the Central American University (UCA) and was one of the spokespersons of the April 19th University Movement. He was captured on September 4, when he was on his way to a meeting of the University Coalition. The Prosecutor’s Office attributes to him the crimes of terrorism, attempted murder, illegal possession of weapons and obstruction of public services.

Before being apprehended, he was in his third year of Agricultural Engineering and studied music at the UPOLI Conservatory on weekends. During the protests he was part of the April 19th Movement of his university, where he also remained in the occupation. On July 11, he was intercepted by several Hilux pick-up trucks full of paramilitaries when, along with Hansell Vasquez and Marlon Fonseca, they were returning after taking humanitarian aid to Nindiri. They were prosecuted for terrorism, the burning of Radio Ya and using restricted weapons.

He was captured on September 23, while he was meeting with a group of comrades to start a march. He was accused, along with other young people occupying the UNAN-Managua, of burning the Arlen Siu Day Care Center. During the protests he was one of the most well-known faces and was part of the University Coordination for Democracy and Justice (CUDJ). He was convicted despite the fact that one of the accusations against him attributed criminal actions to him when in fact he was on a trip to Switzerland.

She was a medical student at UNAN-Leon. She was arrested by policemen and paramilitaries on the night of September 10, along with Sergio Midence Delgadillo, as they were heading to a safe house. The same night they were transferred to the El Chipote interrogation prison in Managua, and eight days later they were accused of “kidnappings, terrorist acts, minor psychological injuries, illegal possession of weapons and obstruction of public services.”

A student of dentistry, at the UNAN-Leon, which expelled him before his capture, on August 25, when, together with other students, he was going to a civic demonstration. He joined the April 19th Movement of Leon, and together with law student, Christopher Nahiroby Olivas, is accused of burning of the University Center of the National University (CUUN) and the death of the student Christiam Emilio Cadena.

He was a law student at the UNAN-Managua, nicknamed “the foreign minister,” for his formal suit and his diplomatic speech. He was entrenched in the compound of the capital and the regime accused him of terrorism. In December, his relatives reported that he was tortured in a punishment cell for singing the National Anthem. 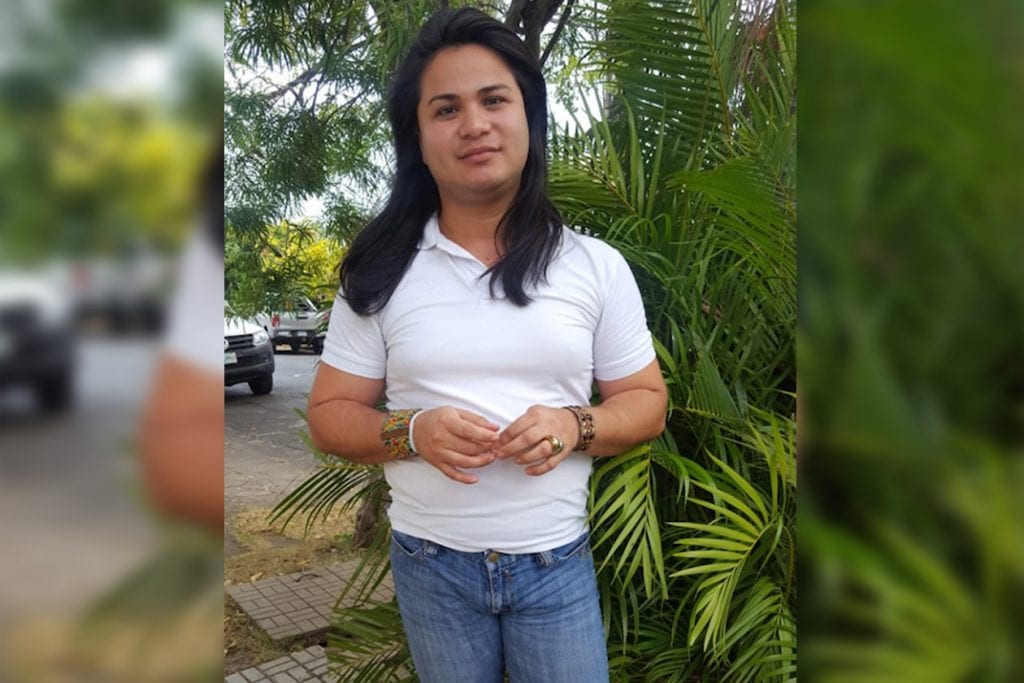 She is a young transsexual, activist and native of Bluefields. She studied Information Technology at the UNAN-Managua and joined the protests since the end of April. She was part of that occupation and was arrested on August 24, along with Yaritza Mairena, Luis Hernandez and other students. Until now, none of them has been convicted.

From the UNAN-Leon, Carlos Duban, 18, was also kidnapped at the beginning of November, along with his mother Ada Patricia Lainez and Ensly Cisne Arauz. He was a student of business administration and accused of “kidnapping, torture, assault, injuries and illegal possession of firearms in detriment of the State.” 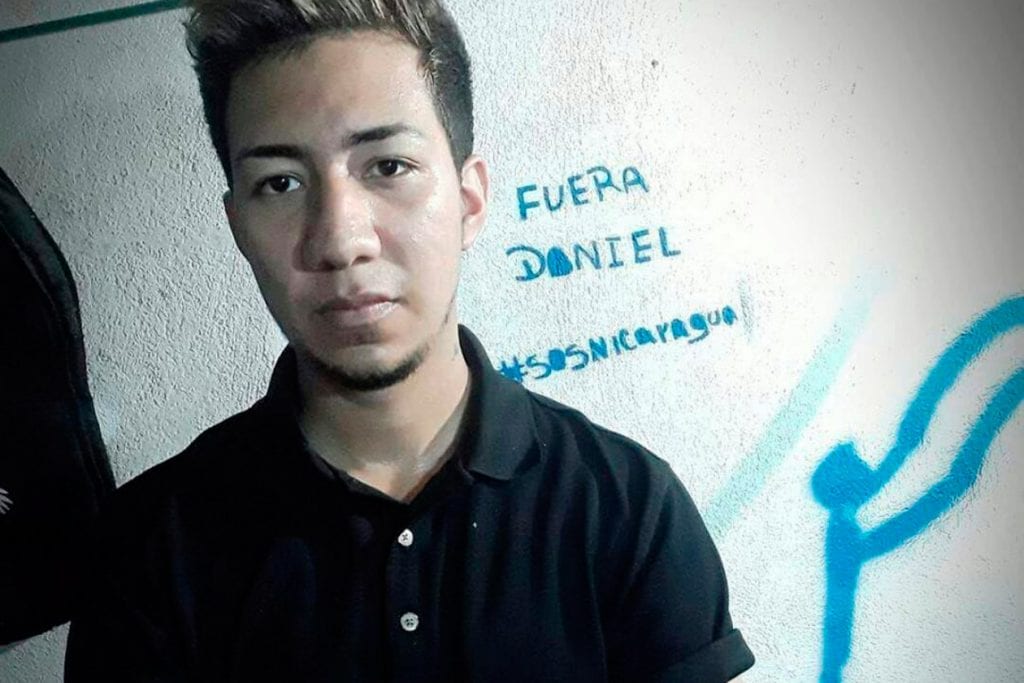 Sentenced to 18 months in prison for throwing blue and white balloons in the streets of Chichigalpa. He was arrested on October 21 and charged by the Prosecutor’s Office 33 days later. He is the son of former Police Chief Juan José Suazo Rivera, who died three years ago in a traffic accident. Suazo studied at the Autonomous Christian University of Nicaragua (UCAN) in Leon.

The three youngsters at the moment of their capture in Santa Teresa, Carazo. Taken from internet.

The three brothers were imprisoned in Carazo for singing during the civic protests of that city. Harvin and Jean Carlos were students at the Regional Multidisciplinary Faculty (Farem), of Carazo, where they were known as a family of talented musicians. They are charged with the crime of terrorism, but to date they have not been convicted. 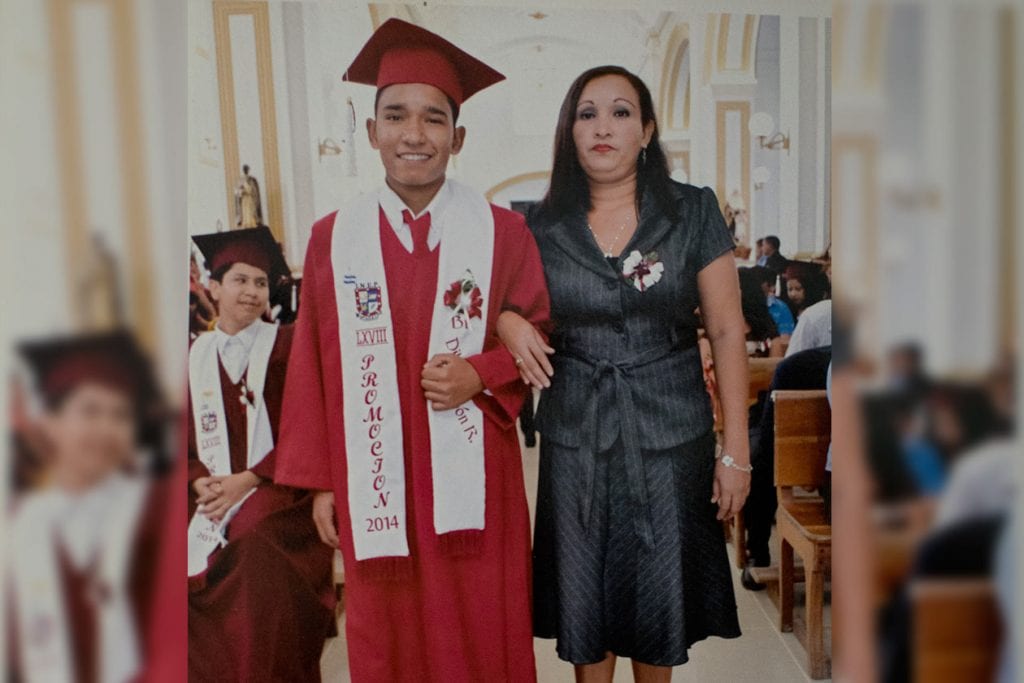 Former member of the National Union of Students of Nicaragua (UNEN), the political arm of the Government within public universities. He left this organization and joined the demonstrations demanding respect for university autonomy and the end of governmental repression. He was arrested on June 21 and is accused of treason. He has been tortured in prison and, consequently, has hearing problems.

Sentenced to eight months for “illegal possession of firearms to the detriment of public safety of the State.” He was studying mechanics at the Technical Institute for Administration and Economy (INTAE), of Matagalpa.

The brothers were students of the Farem-Esteli and were kidnapped on September 29th, when they participated in a sit-in for the freedom of political prisoners in that city. They participated because their father Alex Perez, had been arrested on August 14. Father and sons were accused and condemned for terrorism. Kitzel and Kevin to four years in prison and the father to 17 years.