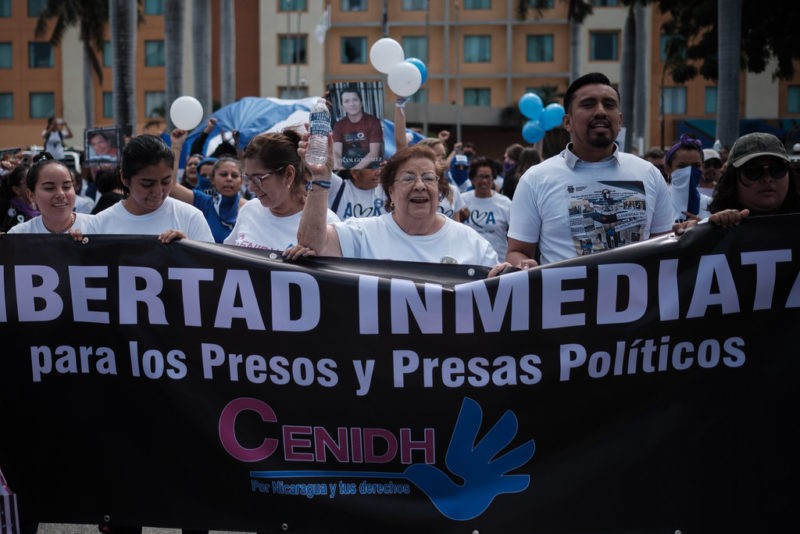 Human rights organizations denounce “restructuring” of paramilitary groups, in addition to torture and rapes in prisons

HAVANA TIMES – The demand for “freedom for political prisoners” and the call for “justice without impunity” prevailed during International Human Rights Day in Nicaragua on Dec. 10th.  Protestors noted that the State has violated the most elemental rights of its citizens and acts of torture, cruel treatment and repression against opposition groups are part of the “normality” imposed by Daniel Ortega’s regime.

The day—which included a series of protests—was led by human rights defenders and the feminist movement, who seized the opportunity to do the viral choreography against macho violence “A rapist in your path” in front of dozens of riot police that formed a human shield to prevent protestors from going out to the street.

Minutes before that protest dance, the president of the Nicaraguan Center for Human Rights (CENIDH), Vilma Nunez, warned that “the repression that began on April 18 (of last year) continues not only in Managua, and uses new perverse modalities, with viciousness, actions and messages loaded with hatred, epithets and slander.”

Nunez also denounced that the State has restructured its “paramilitary forces and espionage bodies, which act selectively and indicate to the shock forces who they should attack.” Similarly, she demanded the release of the political prisoners with whom “the regime has been relentless.”

The human rights defender acknowledge that—in this context—it is “very little” what  CENIDH can do to help victims obtain justice they so long for. However she assured that this organization “is laying the groundwork” so that “one day in Nicaragua you could talk about transitional justice…because definitively this whole circle of violence that is being generated here is a product of the lack of justice.”

Carlos Tunnermann, who is an honorary member of the board of directors of CENIDH, emphasized that in Nicaragua “there is a systematic violation of human rights” and called for “an end to the policy of repression against citizens who are simply expressing their disagreement against the system that’s been imposed on us.”

CENIDH is one of the nine non-governmental organizations whose legal status was arbitrarily cancelled by the Interior Ministry in December 2018, and its facilities confiscated. Despite this they continue to accompany the population in their demand for justice, truth, reparation and non-repetition.

While the CENIDH demanded justice for the victims of repression in Nicaragua, over 400 kilometers away, in San Jose, Costa Rica, the Human Rights Collective Nicaragua Never + Impunity denounced that in the last year, in the National Penitentiary System and some clandestine centers, released political prisoners were tortured, others were raped and all were interrogated under duress.

The complaint of the HR Collective was made during the presentation of the report “Becoming Human Again,” a document that brings together testimonies of 56 victims, 48 released from prison and 8 of their relatives. Among the testimony stand out four people who were raped, seven reported to have suffered sexual abuse and six were threatened with rape themselves or their relatives.

The human rights defender, Juan Carlos Arce, specified that “the interrogation was characterized by excessive physical violence and cruelty against the person arrested with the intention, rather than investigating, of infringing pain and suffering. A systematic practice was that detainees were taken from their cells in early morning hours to be subjected to interrogations carried out under torture methods,” he said.

The members of the Collective were able to determine that the most commonly used torture methods during the arrests were: dry asphyxiation (which consists of placing a plastic bag on the head), beatings, kicks, nail plucking, torture with electric shocks in clavicles and testicles, use of electric guns, burns (with cigarettes) in different parts of the body, especially the soles of the feet and testicles, constant blows with blunt objects on the hands, ice baths and constant threats of deaths towards the detainee and his relatives.

“Among the serious crimes committed the most horrific was sexual torture,” said Arce. Then he specified that in addition to the four people raped there were reports of touching, forced nudity, threats of rape to the victims. “The rape that comes from a state agent constitutes an especially serious and reprehensible act, given the vulnerability of the victim and the abuse of power. This agent deploys actions aimed at intimidating, humiliating, and punishing the victim,” stressed the defender.

A message of terror

For the members of the Collective Nicaragua Never More +, tortures and arbitrary arrests committed in the last year “had as a purpose to send a message of terror, to demobilize” those who protest against the Ortega regime. An analysis in which the Nicaraguan Commission on Human Rights (CPDH) agrees, who —from January to November 2019—, received 2,529 complaints of human rights violations by those who claim “the right to protest.”

“It seems that the current Government does not know the Universal Declaration (on Human Rights). I say it because the right to life that is one of the most sacred and is one of the most affected (in Nicaragua), the right to freedom, to mobilization, right to health, to work, and a series of violations of constitutional rights,” said Marcos Carmona, executive director of the CPDH.

Meanwhile, Denis Darce, deputy director of CPDH, emphasized that in the last year “laws that violate the human rights” of citizens were passed. He claims that “the prohibition and criminalization of the right to protest” continues and denounced that in recent months, protestors detained are being prosecuted for fabricated common crimes, “crimes that are highly repudiated in society,” in an effort to hide the cases.