We selected some of the news written over forty years ago that seem to be written today and that have been rescued by Avil Ramirez on Twitter.

HAVANA TIMES – On Twitter, Avil Ramírez, has been responsible for rescuing the historical memory of Nicaragua, showing through newspaper clippings, the news that was recorded by the main newspapers since fifty years ago and that today warn us that we have repeated the history.

Ramírez started this news collection about ten years ago. He did it because of his insatiable desire to learn more about the country’s history through the newspapers. Without imagining that as time went by a deja vu of what he read would happen. Now he shares with his followers the covers and the notes that seem written today.

“Perhaps what has been facilitated to me to be reacting to what is happening daily in this new stage of civic struggle, is that I have the ease of knowing what happened in the past, for having read almost all the files I have. Therefore, it is easy for me locate events in the media because I know more or less the dates,” says Ramirez, 55.

Through a historical journey that he shares on his Twitter account he has shown how even the slogans that were used during the Somocista dictatorship have returned, even the names that the dictator used in his last years in power, such as his “Operation Clean-up)”.

“The analogy that we can draw up with the slogans is incredible. Back in the day Somoza’s supporters would shout “don’t go, you stay” and now Ortega supporters use “the commander stays”, they are incredible similarities and perhaps it is what has attracted the attention of the users in the social networks,” he explains.

In the coming weeks Avil will publish a book where he collects the covers published by the Novedades newspaper, which belonged to the Somoza dynasty. For now, we leave you the covers that has given us the feeling that they were just published.

There are no political prisoners: 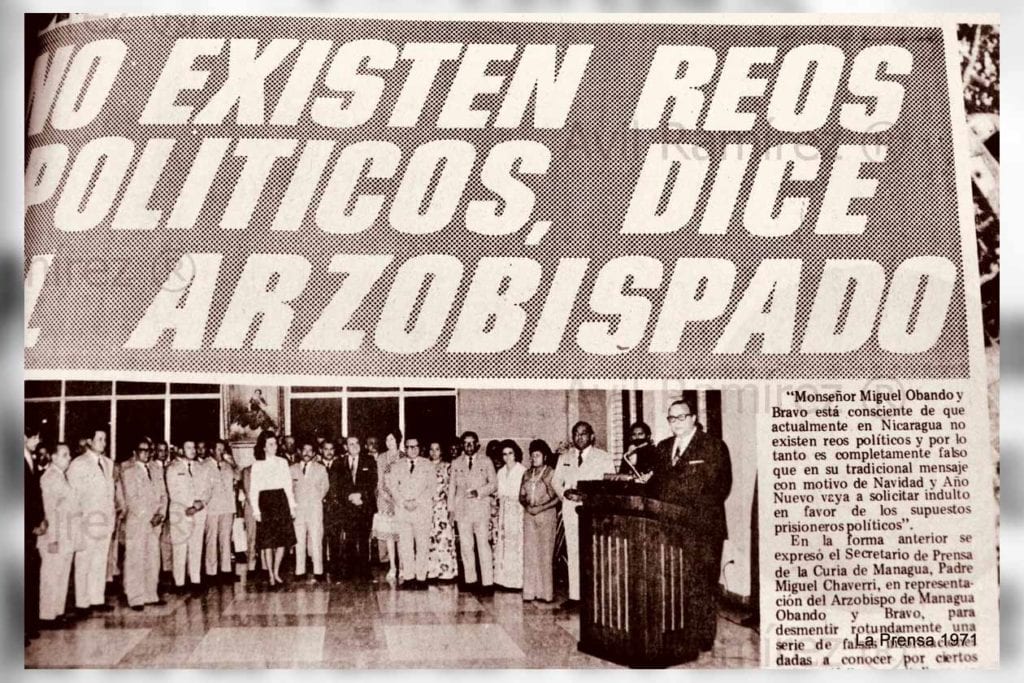 Like the dictator Anastasio Somoza, Daniel Ortega has denied in several interviews the existence of political prisoners. According to him, “those who are detained and tried in Nicaragua are for common crimes. Whoever commits a crime commits a common crime. There is not a single detainee here for speaking out against the Government. 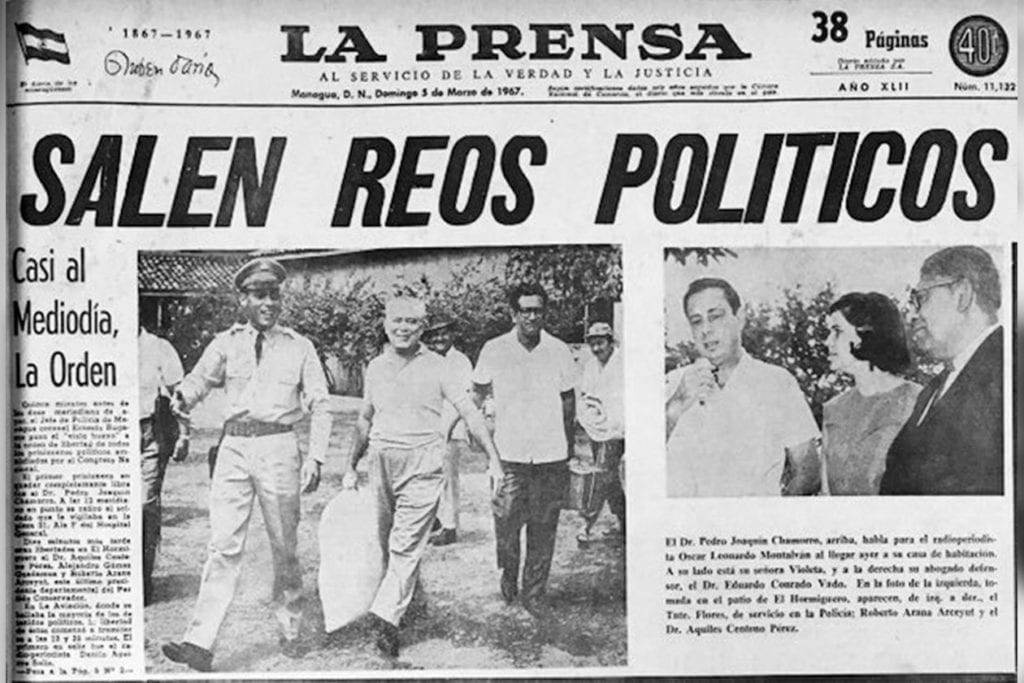 Daniel Ortega has not officially recognized the existence of political prisoners. However, he was pressured to release hundreds of Nicaraguans who had been arrested for protesting against his mandate. This also happened in the 1960s and 1970s, when the Somoza dictatorship existed. 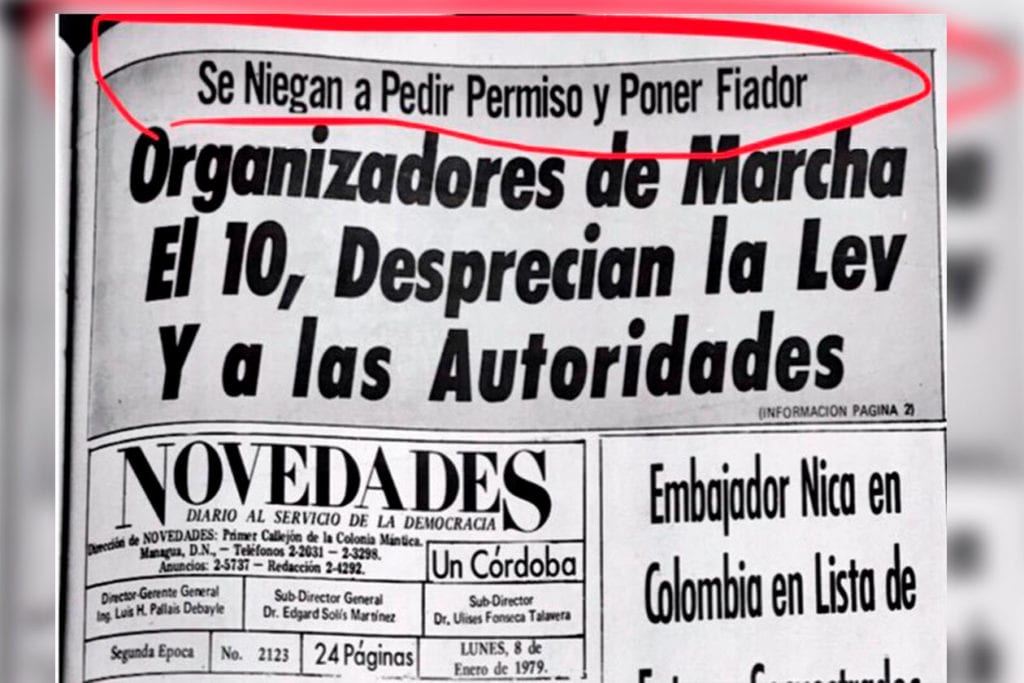 On September 30, 2018, Daniel Ortega, banned demonstrations in public spaces imposing a premise that they must be authorized by the National Police. However, this institution that is directed by him has never approved any march, rather they have been responsible for stopping, repressing and intimidating those who dare to demonstrate. In this cut a note of the newspaper News of 1979 is observed that could have been written at present. 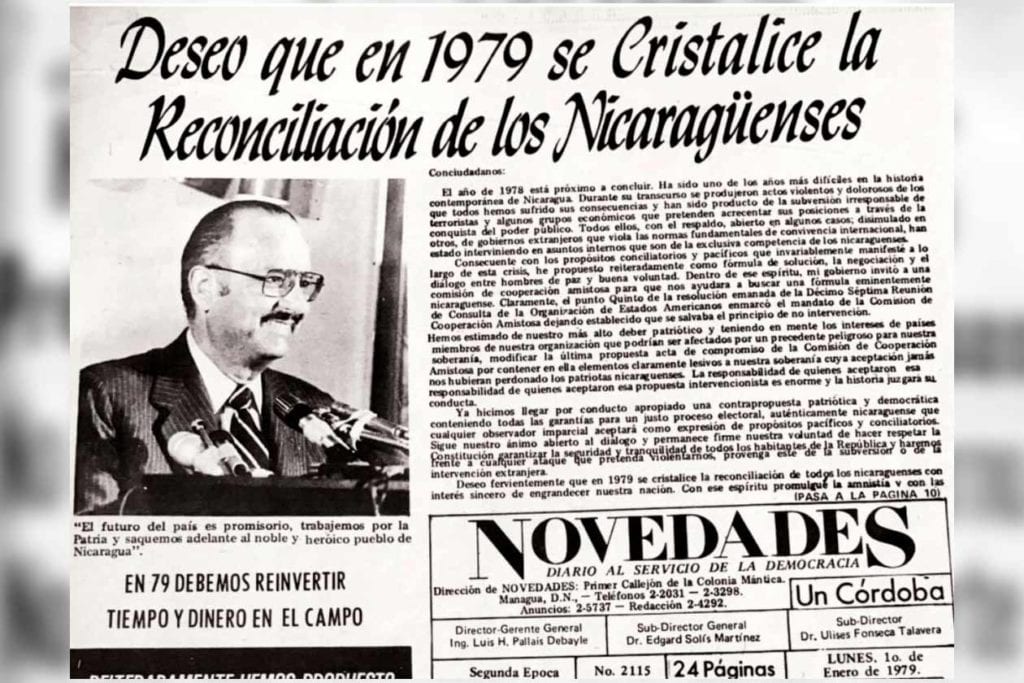 In January of this year, Rosario Murillo, vice president and wife of Daniel Ortega, imposed a law of national reconciliation that caused discomfort among Nicaraguans, however, the funny thing is that forty years ago, in January 1979, Somoza also proclaimed a speech in which he asked for “reconciliation among all Nicaraguans with a sincere interest in exalting the nation.” 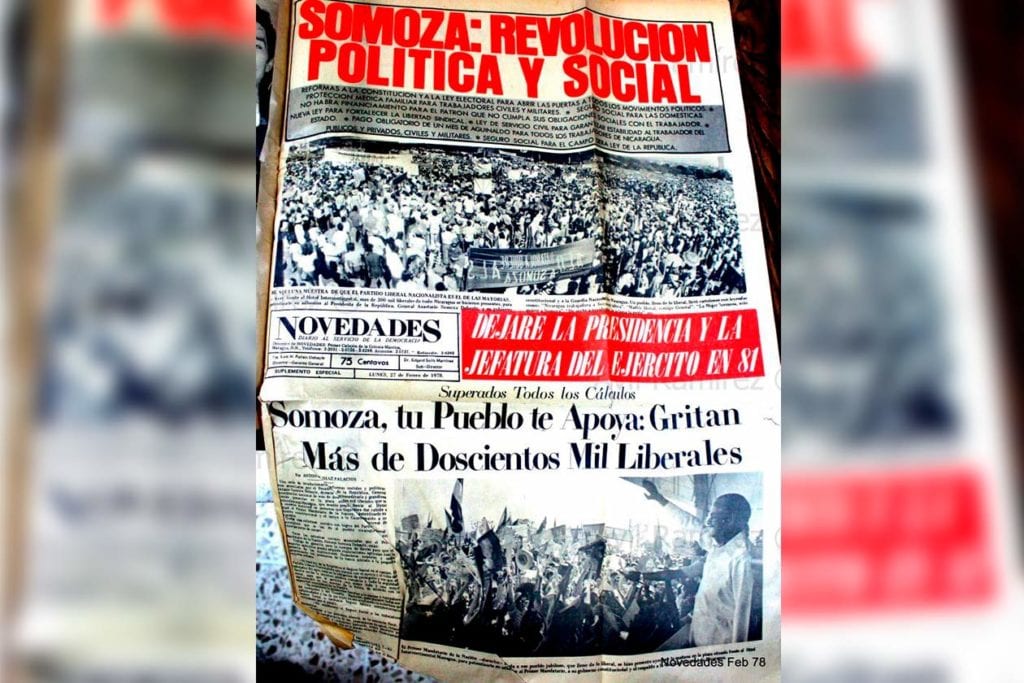 Months before Anastasio Somoza Debayle left his post as president of Nicaragua in July 1979, he still filled places and his followers chanted the slogan “Don’t go, stay.” This would be a deja vú today, as Daniel Ortega’s followers make songs and shout with confidence the phrase “the commander stays.” 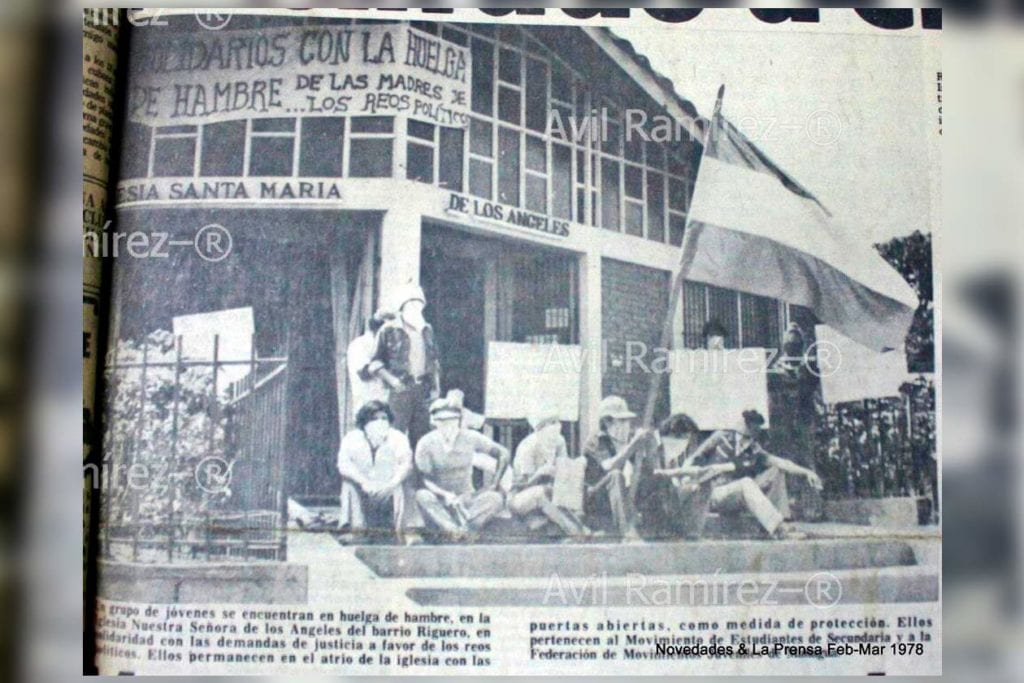 As now, forty years ago, churches also served as a refuge for young people who rose up against the Somoza dictatorship that had been commanding and taking over Nicaragua for almost forty years. This was repeated since last year, when religious temples served to shelter unarmed protesters who ran towards them to save their lives. 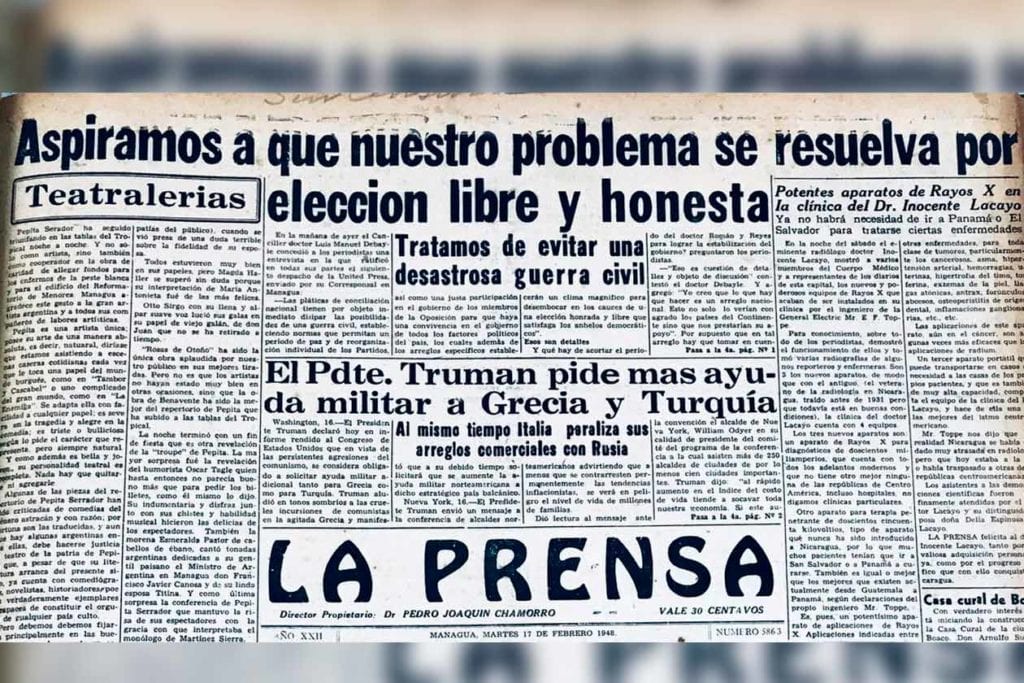 The historical memory of Nicaragua shows us that for more than a century the social struggle has always been for democracy. And the last cycle of social struggle to achieve that dream began on April 18, 2018. 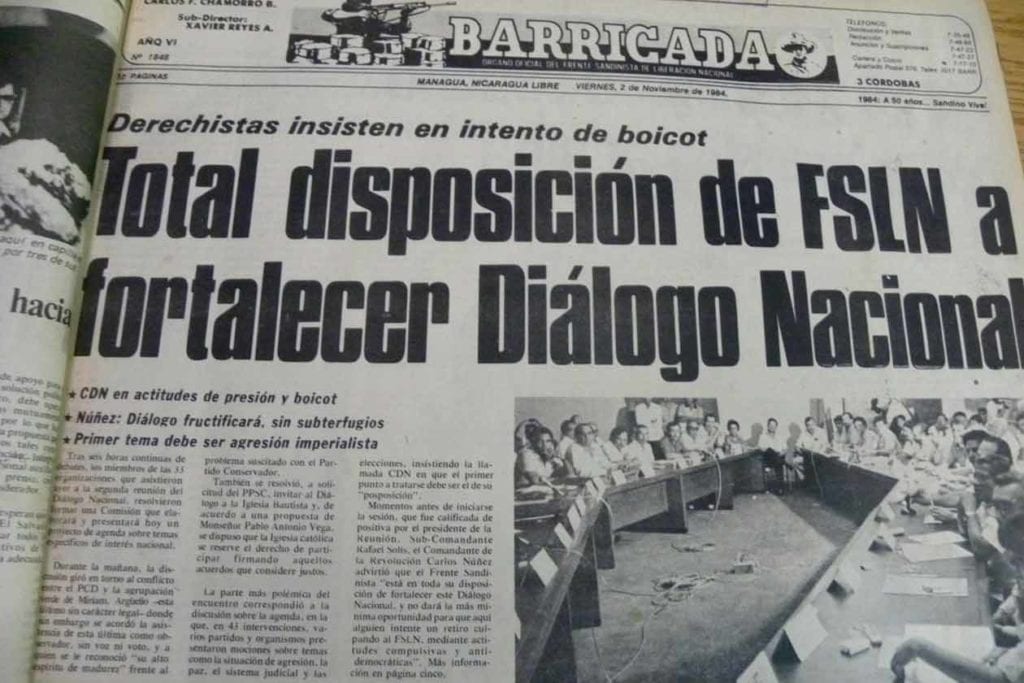 At the end of the eighties, when Daniel Ortega first served as president of Nicaragua, he was also forced to sit down to negotiate in a National Dialogue and as he now exhausted all means to remain in the presidency.

Burial of the Fallen: 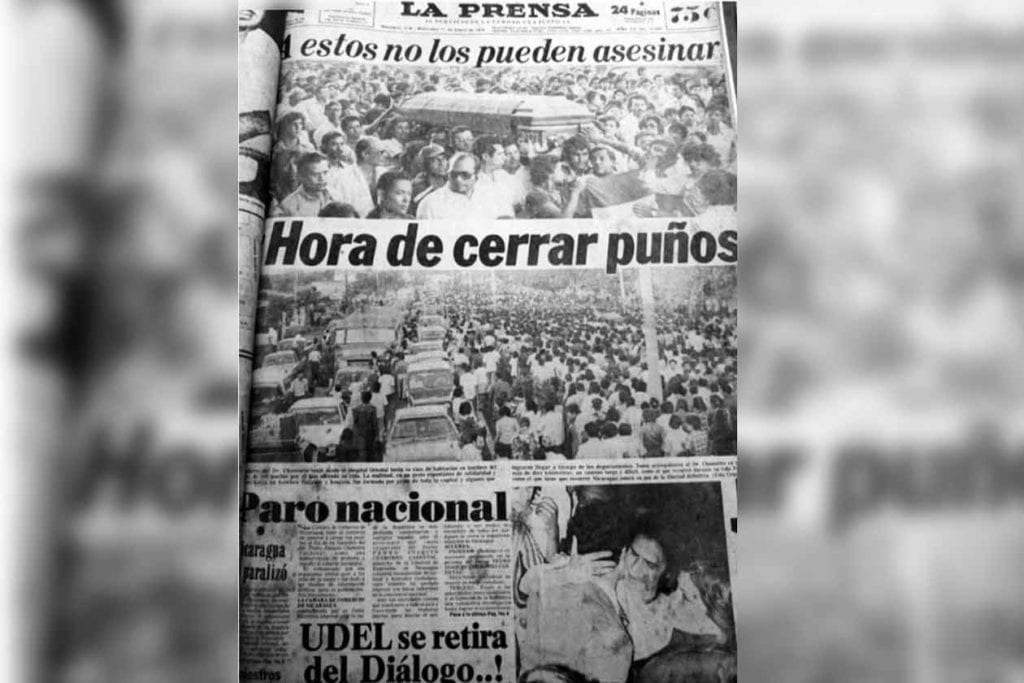 One of the hardest times for Nicaraguans has been to remember those who died for the Sandinista cause and today those who have been killed for asking for a change of government again. To date, according to the Inter-American Commission on Human Rights, 325 people have died.

The Sandinistas were terrorists: 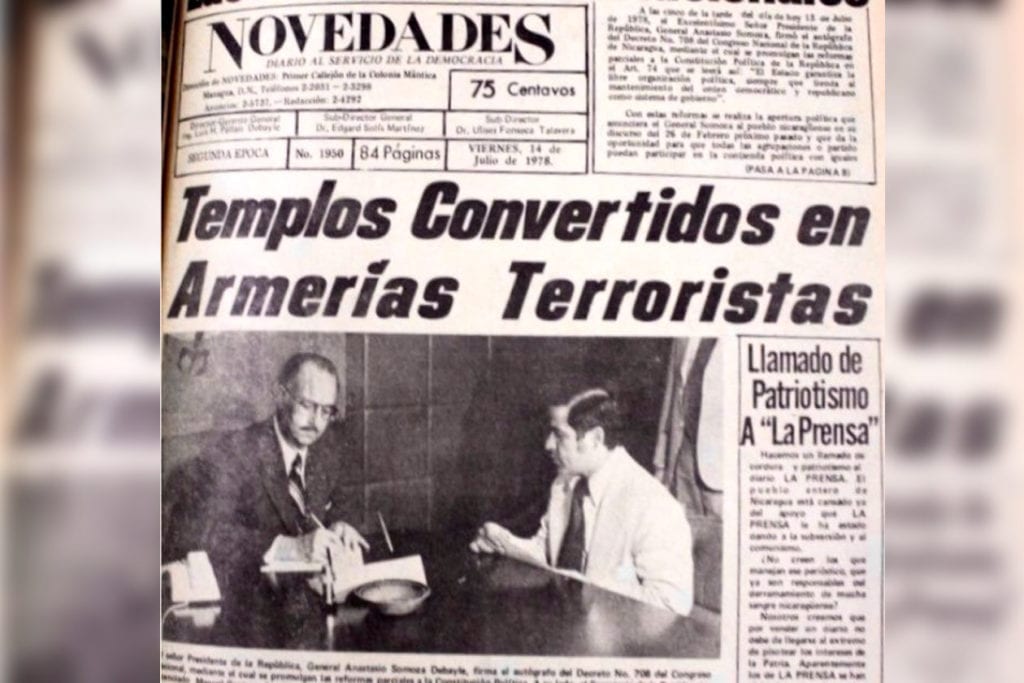 Using the term “terrorists” for his opponents is not exclusive to Daniel Ortega. Forty years ago dictator Anastasio Somoza Debayle used it to refer to the Sandinista guerrillas struggling to get him out of the Nicaraguan presidency. At that time the Catholic Church and independent media such as La Prensa were also singled out to promote hatred as read in this cut from the Somocista newspaper Novedades.