A group of Nicaraguan women joined together to tell stories through embroidery. Go see their creations on display at the “Galeria Codice in Managua.”

HAVANA TIMES – A year ago, Silvia Segovia was extremely anxious, overwhelmed, stressed and lonely because of the political and social crisis that affects the country. It was then that she knew that she needed to do something to channel all her emotions. So she did.

First, she tried weaving, but it didn’t go well. Then, watching embroidery tutorials on the internet, she gave herself a second chance and started embroidering. She has not stopped since then.

“I found myself super fascinated with embroidery because I felt that it helped me a lot to free myself, to channel all that I felt. Later I realized that embroidery was much more than a handicraft. I started searching about its history, activism with embroidery, the different manifestations or ways of protesting through embroidery,” she says.

Segovia is one of fifteen women who are part of the collective of embroiderers and that as of October 25 until November 6, 2019, are presenting their creations at the exhibit: Overflowing Stories, organized by the platform “Hojita de Agua Dulce” and “Managua Furiosa” (Furious Managua), in the “Galeria Codice.”

“They are embroideries that deal with the relationship between us and our body, our self-love. Also, about the home environment, our childhood memories or the spaces where we have developed; with how we feel about safety, gender-based violence, and the pain that exists at the national level for all the tragedies that have occurred in the last year,” explains Aida Castil, creator of “Hojita de Agua Dulce.”

Embroidery came into their lives some time ago. Aida, for example, since her adolescence has been fascinated by needles. However, it was until she returned from a trip to México that she began to embroider until it became a personal project.

“In general, embroidery helps me to slow down my thoughts a little, calm my anxiety and also gives me a lot of satisfaction to see how little by little I improve my technique. Besides, over time it has become a source of income, because it is already a cultural project that includes more people because I do not embroider only for myself, but I also teach,” she explains.

Valeska Rodriguez’s case is similar to Silvia’s. Because, she has been embroidering for a little more than a year. She learned watching videos and as a way to distract herself from the crisis. It soon became her refuge.

“At the beginning it was a way to distract myself from the sociopolitical crisis, but now for me it is a refuge. And I think it is also important to claim embroidery as an art because it takes all the energy and dedication that any other art would take,” says Rodriguez, who also has an embroidery entrepreneurship called “Bengala.”

However, not all women who joined this collective already knew how to embroider as professionals. Many learned because their mothers or grandmothers taught them, others through videos and some in the classes taught by “Hojita de Agua Dulce.”

“The project itself has already held several meetings. Many of us already knew each other because we have joined in other embroidery ventures. So, this space helped us to open up, talk about themes that are often invisible or simply we do not give them the importance that we should and through embroidery it makes it easier for us to express ourselves. Well, I feel that through stiches, it is easier to convey something when we don’t have words to do it,” says Segovia.

The exhibit to be held at Galeria Codice is completely free. You could see it from Monday to Friday in a nine to five in the afternoon schedule and on Saturdays from nine to one. The women in this collective intend to continue having gatherings in which more people interested in embroidery can join. 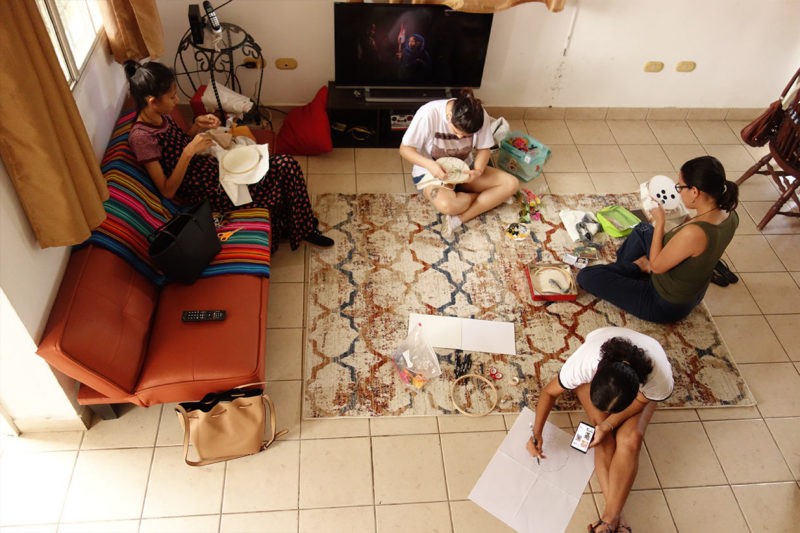