…against activists, journalists and opponents 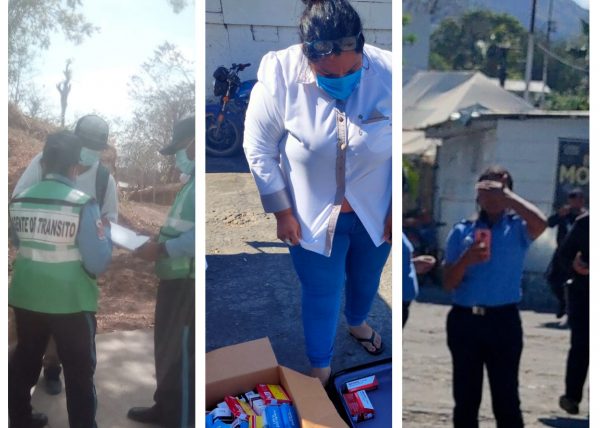 More than 40 people denounced harassment, siege, persecution and threats from police and people linked to the Ortega regime.

HAVANA TIMES – Human rights defenders, journalists, peasants and former political prisoners, denounced a new wave of repression from the Ortega regime through the police and fanatics of the Sandinista Front, who continue to carry out sieges, arrests, criminalization, threats and prohibit political meetings.

The complaints registered on social networks and media outlets include the obstruction of the mobilization of a group of peasants who were heading from Rivas to Managua. The arbitrary detention of defense lawyer Yonarqui Martinez and threats against journalist Jennifer Ortiz. The obstructing of the work of journalist Geraldine Dominguez, the arrest of former political prisoner Marlon Castellon and the criminalization of the political prisoners Yorling Robles and Oscar Amador.

A group of 37 members of the Peasant Movement were prevented this Saturday, by Ortega’s police from leaving the department of Rivas when they were on their way to a meeting of that organization in Managua.

The officers stopped the bus at the Ochomogo Bridge in Rivas. They searched the peasants, took photographs of them, collected their personal data and forced them to return under custody.

The rural residents complained that they are no longer even allowed to travel through the country. Because the Ortega regime “is desperate and they do is everything possible to prevent us from organizing.”

Reporters threatened and impeded from doing their job

Journalist Geraldine Dominguez, an employee of Channel 10, denounced on March 16, that a group of supporters of the Ortega regime and officials of the Managua Municipal Markets Corporation (COMMEMA) obstructed her work when she was doing a report from the “Mayoreo” (Wholesale) Market.

The TV reporter explained that, while she was conducting some interviews with vendors about the cost of the basic products, Commema’s officials approached her and ask what she was doing and told her that they would be “protecting” her.

Dominguez pointed out that, instead, the actions of the officials were of persecution and intimidation not only against her, but also to the people being interviewed.

On March 18, journalist Jennifer Ortiza was also a victim of people linked to the Sandinista Front. She was publicly threatened by Sandinista commentator Moises Absalon Pastora, who anchors a program on the state’s Channel 6.

Pastora made a clear reference to an article published by the “Nicaragua Investiga,” media outlet run by Ortiz. He said they will not hesitate to “pounce on” those who state this type of criticism.

“We will jump on who believes herself to be untouchable because she wears a skirt. I remind her that in politics I don’t see her as a journalist. Whoever goes into the kitchen gets burned,” threatened the Sandinista commentator.

Pastora also referred to media critical of the Ortega regime as “platforms of hate and disinformation.” He added that “I would like to see most of them closed.”

In the last three years, the Ortega regime has carried out actions contrary to press freedom in Nicaragua. Recently, the Ortega regime made official the 2018 confiscation of Confidencial and 100% Noticias facilities. They opened health centers in the stolen media properties as a way to wash over the crimes.

On March 18, lawyer and human rights activist Yonarqui Martinez also denounced her arbitrary detention by police officers. They prevented her from embarking for the island of Ometepe, where she would visit former political prisoner Justo Rodriguez.

“I was being investigated, supposedly, for carrying drugs. My only crime is to defend the human rights of Justo Rodriguez,” said the lawyer through her social networks. She published photographs of the medicines and milk that she was carrying for the former political prisoner of the Daniel Ortega regime.

The Mesoamerican Initiative for Women Human Rights Defenders joined Martinez’s complaint by issuing an alert. It underscored that the officers had “illegally detained” and “violated the lawyer’s right of free movement.”

The young man was arrested when he arrived at his home in the Loma Linda neighborhood, in Managua. He was later transferred to a police station in Ciudad Sandino.

In an interview with Confidencial, relatives of Castellon explained that the former political prisoner continues under detention. According to officials, “he is being investigated in a robbery case.”

The relatives are demanding his release. They assure that, once again, he is being “accused of things that he did not commit.” They say the case is “political,” noting three other detentions since his release in December 2019.

“The first time they accused him of aggravated robbery and (possession) of weapons. They never proved anything and continue to arrest him. We demand his release because he is innocent. All political prisoners must be released,” demanded one of his relatives who prefers to not reveal her identity.

Lawyer Julio Montenegro also denounced, on March 16, that political prisoners Yorlin Robles Carballo and Oscar Amador Acuna, were found “guilty of the crimes of drug-trafficking and possession of restricted weapons.”

Montenegro explained that prosecutor Luis Mongalo asked for the maximum penalty of 23 years in prison and a considerable fine for both political prisoners.

The human rights defender explains that the judicial process was plague by “a series of anomalies” against his defendants. These occurred from the time of their arrest and search of their homes and the contradictions in the testimonies of police officers during trial hearings.

Robles and Amador remain under arrest since August 2020, after being captured in their homes located in Catarina. Montenegro said that once the sentence is notified, he will proceed to appeal.