The same special police agents are used as witnesses at multiple trials for crimes supposedly occurring throughout the country.

HAVANA TIMES – The same Managua police are making the arrests, then serving as chief witnesses at multiple trials of political prisoners. This was the denunciation made by Eber Acevedo, who showed evidence of four such cases. Acevedo is a lawyer with the Permanent Commission for Human Rights.

The lawyer questioned the veracity of the facts cited by police officers. The police version is later repeated by the Prosecution and used against the accused political prisoners.

“In the latest cases, the same police agents are showing up all over the country in a surprising way. They’re in Rio San Juan, Matagalpa, Masaya, Jinotega and Managua, supposedly doing the work of patrolling. These officers are based at the Managua Directorate for Judicial Assistance (DAJ), the National Police’s special investigation unit. However, now they’re doing work of surveillance and patrolling all over the country,” Acevedo criticized.

He offered the example of three Managua DAJ detectives: Inspector Ramon Santana, Lieutenant Felipe Neris Matute, and Inspector Marlon Gonzalez. On September 9, 2020, they helped capture five rural residents from the departments of Rio San Juan and Chontales. The farmers were accused of belonging to an organized criminal band that supposedly had committed various crimes. Strangely enough, the same police officers were part of a police operation in the far-off city of Masaya. There, they captured Danny Garcia Gonzalez and William Caldera Navarrete. The five farmers, as well as the two Masaya residents, are all considered political prisoners.

Danny Garcia and William Caldera were accused of possessing explosive artefacts, carrying firearms, and drug trafficking. Their lawyers have denounced a series of legal irregularities in their case.

In addition to the above cases, Lieutenant Felipe Matute also participated in the capture of political prisoner Benjamin Ernesto Gutierrez. Gutierrez was arrested in Masaya on January 13th, accused of drug trafficking and firearms possession.

Meanwhile, Inspector Marlon Gonzalez was involved in the detention of political prisoner Rodolfo Alexander Zamora in Managua on September 17th. That young man was accused of trafficking drugs, narcotics and other controlled substances.

In the four cases, the uniformed officials of the DAJ in Managua were utilized as prosecution witnesses in different departments of the country.

According to the narrative of events presented by the Prosecution, the DAJ officials were doing police work in these places. By chance, they observed the accused behaving in a suspicious manner on foot or in a vehicle. At times, the narrative varies a little. They claim they captured the prisoner when they searched their home and found drugs and arms.

“In many cases, we’ve demonstrated that the political prisoners were detained and removed from their homes by the police. That they weren’t captured in public places, by police stops, or in any other situation,” Acevedo stated.

Julio Montenegro, another attorney who defends political prisoners, is currently overseeing the cases of 38 prisoners of conscience. He affirmed that they’re using the same DAJ police officers repeatedly as witnesses for the prosecution.

“According to their statements, the Managua DAJ officials always happen to be realizing police operations in different parts of the country. In passing, they manage to capture the accused political prisoners. The normal procedure is that the arrest and capture are made by the local police from wherever the crime occurs. Those same local police then normally act as witnesses in the trials,” stated Montenegro, an expert in Criminal Law.

Under the Law of Police Functions, the DAJ is the special branch of the police charged with investigating crimes. The police carry out the orders and instructions they receive from these judicial authorities. In practice, the officials of this police branch are being used to investigate relevant cases or capture people of great importance. They’re not there to get involved in just any illicit action. This indicates that for the regime, opposition sympathizers or activists are of great relevance.

Authority based on a memo

Montenegro further explained that the Prosecution is basing their actions on Memo #430 of the Supreme Court’s Penal Section. They use that Memo to validate trial declarations from witnesses not involved in the actual investigations. “This is totally illegal, because a memo isn’t above a regular law, nor above the Constitution,” Montenegro criticized.

Nicaragua’s Supreme Court issued Memo #430 in August 2016. It states: “Frequently, the forensic doctors or experts are on leave, vacation, in training, outside the country or aren’t working for the state anymore. As such, they’re not available to attend trials and explain the forensic declaration they’ve written. That can cause a delay of justice, through not being able to opportunely incorporate this opinion into the file in accordance with Article 165 of the Constitution.

Yonarqui Martinez, a defense attorney, explains the mechanism used. “Those who attend the trials are mostly the same police agents, the same investigators, the same experts. Even the specialist who analyzes the bombs they supposedly find on the suspect is the same person. They call him Code One, a police commissioner who goes to all the cases against the political prisoners. They don’t even have the courtesy to be honest about it. It’s well known which police lend their hands to this kind of process.”

The Prosecution frequently accuses opponents of Daniel Ortega’s regime of being members of criminal organizations. They’re accused of diverse crimes committed in the zone where they’ve been detained. Such was the case of the five farmers from Chontales and Rio San Juan detained by the Managua DAJ officials.

In the Prosecution’s narratives, the accused prisoners of conscience are almost always seen carrying olive-green, military-style backpacks. In them, they’re packing arms, drugs, or explosives. They also routinely describe them as carrying pistols or illicit substances taped to their bodies.

Yonarqui Martinez mentioned other similarities in such cases of political prisoners. The police reports generally say they decided to transport the prisoners to the main Managua jail. They don’t bother to use their field kits to test the supposed drugs. The reports then allege that laboratory studies were performed at the El Chipote jail installations and resulted positive for marijuana or cocaine. Violating the chain of custody for evidence has become the police norm in the case of the political prisoners.

“Among the irregularities we see in the police testimony is that they never really go to the site of events. When we ask them, for example: What was the zone like? They say they don’t remember, because it was the only time they were there. Or that they were distracted. An official once said he didn’t remember because the place had left him traumatized. Sometimes they contradict each other in the information they present at the trials,” Martinez denounced.

Criminal lawyer Noel Alonzo Cano questioned the prosecution’s use of the police witness called “Code One”. He generally states at the trials that he’d been on the trail of the accused for a long time. That they were trafficking drugs or arms, within and outside Nicaragua. But he never offers any other evidence.

“In the latest detentions of political prisoners, the Prosecution doesn’t even go to the trouble of writing up a new accusation. They grab what we’ve described as a prewritten script and then just change the names and places of the events. We’ve noted that some of the accusatory declarations even have the same typos,” Eber Acevedo stated. 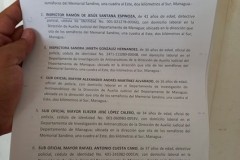 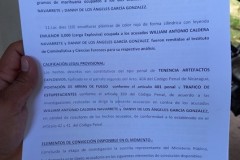 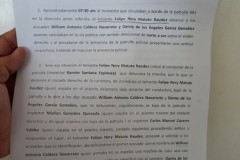 Between Sky & Land, Aragua, Venezuela – Photo of the Day

Why I Decided to Stop Planting Tobacco?