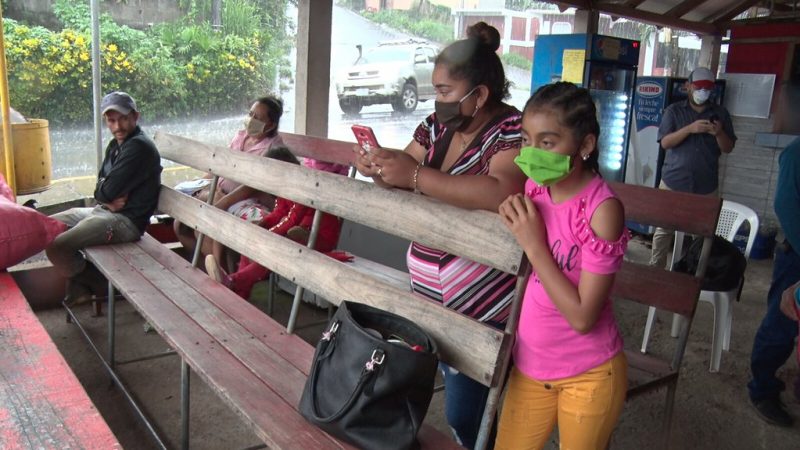 Daily life in the municipality that has challenged the official inaction on COVID-19 balances fear of the pandemic with fear for the economy.

HAVANA TIMES – Rene Arguello hadn’t been “down” to the town center of Muelle de los Bueyes in Nicaragua’s South Caribbean Coast Autonomous Region for over a month. He did so last Wednesday, because he “urgently” needed to transfer some sheets of zinc roofing from the town to his farm in the community of Pintada Uno, some nine kilometers (5.6 miles) from the town of about 6,000. He had stopped going there in order to comply with a “voluntary self-quarantine” that the municipal authorities had suggested.

Since March, this largely rural municipality, located 155 miles (250 kms) from Managua, has initiated changes to avoid the community spread of COVID-19 there. The parks and plazas are closed, and there are no sports being practiced in the stadiums, basketball courts and baseball fields. Parties and public activities are prohibited.

The businesses are also taking preventive measures such as putting out rugs with a bleach solution for disinfecting shoes. In addition, shops, grocery stores, pharmacies and small eating places have installed handwashing stations, or have improvised a sanitation area with buckets of water, alcohol or hand sanitizer.

“We’re asking our customers to please keep their distance, and to wash their hands before we wait on them. We’re disinfecting the money we receive as well,” explains Jamileth Diaz, a pharmacy employee.

She adds that they’ve also shortened their hours. “We’re opening later and closing earlier. The customers know this, so they have to make an effort to come during the hours that we can assist them.”

Confidencial confirmed that there’s minimal circulation of people in this town, and that the majority of the residents and business owners are wearing face masks. The scant bus traffic between the town center and the outlying communities can also be noted. Several residents explained that given the decrease in customers – because they’re staying home – the transport owners decided to work staggered schedules.

“There are local routes in the municipality that go from Muelle to the outlying communities. The majority of these are paralyzed, because no one is traveling.  We have stretches of 25 – 30 miles where the bus owners have stopped circulating, partly because no one was going out and partly to keep themselves safe,” said Gary Contreras, Municipal Planning Director.

When the pandemic first arrived in America, the functionary recalls, the municipality “didn’t do anything”, because the Health Ministry “wasn’t reporting that Nicaragua had cases.” However, reports of cases in the neighboring countries – Honduras, El Salvador and Costa Rica – began to arrive. There’s a sizable transit of immigrants from Muelle de los Bueyes to Costa Rica, so, given that, we began to think about what we could do to avoid contagion.”

At the end of March, the Municipal Government approved an ordinance that suspended all permits for large crowd activities and authorized the mayor, Juan Jose Jaime, to establish measures to safeguard the health of the population. The eleven city council members who represent the Liberal Constitutionalist Party voted in favor of the ordinance while the six from the Sandinista Front voted against.

With the mandate this ordinance gave him, the mayor decided at the beginning of June that “due to the growing contagion and deaths confirmed from COVID-19 all over the country, we’re issuing a broad call to unite in the voluntary quarantine that the non-governmental medical associations have recommended as well as our institution. In these moments we find ourselves on a rising curve of viral spread, and as such we must take extreme preventive measures.”

Mayor Jaime’s call to action was based on the call made by 34 Nicaraguan Medical Associations.  On June 1st, these groups issued a communique urging the population to unite in a “voluntary national quarantine” before the “unstoppable” increase of COVID-19 cases in the country.

According to the doctors, the so-called “national quarantine” consists of staying at home for at least three or four weeks, going out to get groceries once a week, guaranteeing a distance of at least 5 feet between people, using face coverings or protective shields outside the home and the constant washing of hands.

The decision of the Muelle de los Bueyes municipality is similar to that of three indigenous governments in the Nicaraguan Caribbean Region. These tribal governments have also declared a quarantine in their territories.

The quarantine in the indigenous communities includes the cancellation of classes at all academic levels, as well as the suspension of public transportation that connects the community to other municipalities.

During the time of confinement, only ambulances and other health-related emergency vehicles are permitted to enter, but citizens from outside the indigenous communities will not be allowed to come in.

The Muelle de los Bueyes mayor’s office can’t declare an independent quarantine like the indigenous governments, since the municipalities aren’t autonomous and lack the legal self-determination of the indigenous peoples.

Silvio Prado, an expert in local government, explains that the Law of Municipalities establishes that the town has the capability to promote health and hygiene measures, and above all to wage campaigns of preventive health.

The pandemic, he emphasizes, “is a threat to the life of the town residents, and given the vacuum in action on the national level, given the absence or rather the abandonment of responsibility on the part of the central government, it’s up to the towns, the local governments, to act.”

Based on his legal faculties, the Muelle de los Bueyes mayor decided to send most of his workers home on staggered vacation schedules, cutting two hours off the normal hours for public attention in order to effect this change. Further, only essential areas are functioning, such as the registry of births and deaths, and garbage collection.

These changes will have an economic cost for the municipality controlled by the opposition party, at a time when the town is already suffering from budget cuts imposed by the Ortega government.

“We have to turn everything that our town collects here over to the Interior Ministry; from this, they should be returning approximately US $848,000. However, since 2018, the year of the civic uprising against the Ortega regime, they’ve been cutting and cutting [the transfer of funds back to the town government],” alleges Contreras, who adds that this year town officials were warned “that they’d be receiving some US $26,320 for the entire year.” This figure was over thirty times less than they were expecting.

Despite the measures adopted by the mayor’s office and the precautions being taken by the residents, three suspected cases of COVID-19 have already been reported in Muelle de los Bueyes, according to the registry of Citizens’ Observatory, a monitoring group made up of a voluntary network of health workers all over the country.

In total, 90 suspected cases have been reported in the South Caribbean Region, with Bluefields the hotspot with 61 cases. The epidemic also extends into the North Caribbean Region. This past Thursday, June 11, gynecologist Wilfred Cunningham Kein died of COVID-19 in Bilwi.

“We have cases [of the virus], but they’re not cases that have been officially reported by the Health Ministry. People have spoken unofficially to the municipal government about these cases,” Contreras comments.

The functionary emphasizes that officially there have been no deaths in this area from the pandemic, even though in the town “there are one or two deaths that are believed to be from COVID-19, because these bodies were sent to be buried immediately. Straight from the morgue to the cemetery.”

There’s a general hospital in Muelle de los Bueyes where, presumably, they’ve set aside a wing for treating cases of COVID-19. The town government and population have almost no official information about the pandemic, due to the scant communication between the mayor’s office and the local representatives of the Health Ministry.

Challenge for the townspeople

The voluntary self-quarantine has also imposed a challenge for the businesses, since the number of customers has dropped. Muelle de los Bueyes is a predominantly rural municipality, comprising 54 communities and 8 villages. The principal economic activity is cattle-raising, for both dairy production and for fattening.

“We’re protecting ourselves, but we can’t close. We have to pay rent, water, and other services. I’d like to shut myself in like others have, but I’m poor. I live from this [business], I don’t own a cow, I don’t own a pig,” commented Reina Rivas, who owns a clothing store.

Alcira Ramirez, who runs a diner, pointed out that her clientele has shrunk because “some institutions have stopped sending their personnel. Few people are visiting the businesses.” However, she realizes that she can’t shut her doors. “What are we going to live from? We’re struggling. It’s not such a big thing for the moment, but we’re surviving from the little that we can collect.”