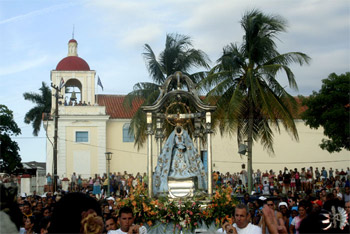 HAVANA TIMES – Each year on September 7th thousands of Cubans living in Havana and especially in the town of Regla, take the Virgin of Regla from its sanctuary and carry out a pilgrimage for several blocks.

The tradition of celebrating the Day of the Virgin of Regla, has its roots in the Spanish colonization, but the African slaves identified it with Yemaya, the queen of the waters, which began what we now call religious syncretism.

Today, both Catholics and devotees of Yemaya partake in the festivities of the Virgin of Regla.

This photo essay will give you a glimpse of the procession held this September 7.

2 thoughts on “Pilgrimage of the Virgin of Regla”