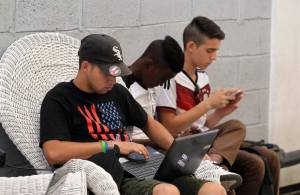 HAVANA TIMES — Replacing the current low-speed dial-up systems with broadband Internet connections during 2015 and 2016 – and taking these services to at least 50 % (or 1,942,950) homes by 2020 – are two of the noteworthy aims of Cuba’s Ministry of Communications, part of a “National Strategy for the Development of Broad Bandwidth Infrastructure in Cuba.”

These plans are contained in an executive summary leaked by the blog La Chiringa de Cuba on June 8. The document outlines the political will of Cuban authorities to extend online access on the island, which currently reaches 25.7 percent of the population, although most of those can only access the local “Intranet”.

The document confirms plans to set up Wi-Fi networks this year and begin offering broadband mobile Internet services for Cuban users, through a 3G technology network.

The plans announce that authorities hope to achieve 100% connectivity at all levels of Communist Party entities, all government bodies, banking institutions and mail offices by 2018. By 2020, 80% of commercial entities (State and private) and 95% of educational and health institutions should enjoy a quality Internet connection.

By then, access to a 256 kbit/s broadband connection should not cost more than 5% of the average monthly salary in Cuba.

One of the obstacles that the implementation of this nationwide strategy runs into is the country’s poor, existing infrastructure. Only 24.1% of the population has access to landlines and a mere 21.4% uses mobile phones.

To start with, authorities aim to guarantee a broadband connection of at least 256 kbits/s. In the course of time, the definition of broadband should evolve towards advanced bandwidth (2048 kbit/s or 2 Mb download speed) and total bandwidth (10 mbit/s download speed), by 2025 and 2030, respectively.

According to the document, broadband (fixed or mobile) currently reaches 0% of the population and only 3.4% of homes have Internet access.

The document currently being circulated at different State entities in search of suggestions summarizes a larger, 83-page document, where this strategy is fully laid out. The latter should be approved this coming June 22 and then be made public. The complete implementation schedule will not be ready until October. By then, the costs, terms and officials responsible for implementing the scheme should be defined.

One of the “measures” described suggests “diversifying entities that offer Internet services through different forms of relationships with the telecommunications operator, to incentivize the rendering of services that prioritize social sectors.”

In the future, this scheme may include non-State management of third-party Internet services, such as cybercafés or small operators, based on the use of “telecommunications agents,” one of the self-employment categories approved which is currently limited to the sale of pre-paid mobile phone cards and collecting payment for telephone services.

The leaked document also reveals that a Telecommunications and New Technologies Law, a Decree Law and other complementary norms are currently being developed to put an end to the legal vagueness and regulatory backwardness that exists in Cuba today.

Here is a link to the complete document for OnCuba readers. We will continue to cover the issue in future articles.  Estrategia Nacional para el desarrollo de la Banda Ancha en Cuba. Resumen Ejecutivo (“National Strategy for the Development of Broad Bandwidth in Cuba. Executive Summary”)

11 thoughts on “Plans to Broaden Internet Access in Cuba Leaked”