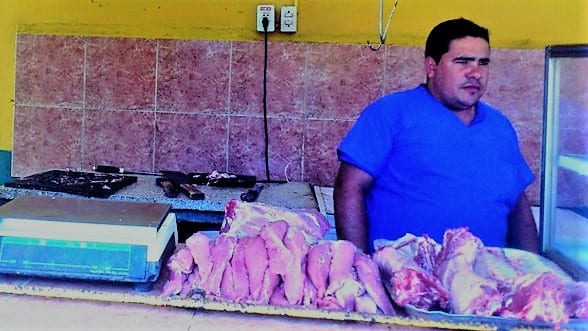 HAVANA TIMES — January brought prices that people in Havana had never seen before at their markets. Boneless pork (steak), which is being sold for 50 regular Cuban pesos, the equivalent of 2 USD a pound, particularly stands out. While the price might seem reasonable in other countries, its quite a hefty sum for the extremely low Cuban salaries barely averaging 20 USD a month.

“It’s better to buy beef steaks on the black market right now, as the price of pork is the same and at least we can have a taste of the forbidden,” a man at the El Brana cafe on Carlos III avenue said, where he was eating a “full meal” of white rice, minced meat mixed with soy and some boiled sweet potato along with some scrawny, withered tomatoes, a dish directed at people with low incomes at different establishments in the capital.

Even though it’s more appreciated, the price of beef hasn’t changed, maybe because of the risk there is of going to prison just because you have it in your home; in fact, sellers want to sell this hot product as fast as possible.

After visiting a dozen agro-markets where those who rent out every floorboard determine how much to buy and set prices for customers, an important detail could be seen: at the majority of these markets, the mandatory customer information didn’t appear on the boards used for this purpose.

When I asked about why there was this exception, which is also a violation of regulations, there was a lot of silence, but a butcher’s assistant answered in a whisper, warning me that he didn’t want to be named in this article:

“People are afraid, if we write up 50 pesos per pound up on the board, just imagine! Maybe what happened with private collective taxi-drivers, when the government set them compulsory rates for their services, accusing them of exploiting the Cuban people, happens here too. It’s better this way and if there are any problems, the signs saying 40-45 pesos are ready.”

The price of boneless pork also affects other cuts of the same meat such as ribs and chops, which are 5 pesos more than what they were in 2017. Sellers aren’t giving any clear explanations for the price hike, they generally mention what they call the “plague” of controllers (police, inspectors, as well as customers who complain to the authorities).

Even though the “plague” exists, there are financial factors which directly impact the upward spiral of prices and Omar Everleny, the former director of the Center for the Study of the Cuban Economy at Havana University, who was removed from his position and later expelled from Havana University where he taught as a professor, summarizes this:

I only need to cite a stall owner who said this to me: “My children also have a right to have a plasma TV, and I have to get this money from somewhere.”

Let’s add to these factors that marked shortages at the TRDs have limited consumer options recently, customers are now focused on buying less products with their incomes. The consequence of this is that it feeds any price hike. (Everleny on the Progreso Semanal website, January 5th 2018.

The paradox lies in the fact that while the Cuban population is the same as it was several years ago (it has even slightly decreased), pork production has been increasing during this same time period. The National Office of Statistics and Information (ONEI) claims that pork production had increased last year by 22%.

When speaking about prices, it’s fair to pick up President Raul Castro’s phrase that is repeated time and time again, numbers are going up “without haste but without stopping.”

The issue of pork, the meat which is most sold in Cuban markets, proves that supply and demand markets are inevitably progressing towards reaching prices that are the equivalent of those at Hard-currency Stores (TRD). From its vast watchpoint 90 miles away, the dollar doesn’t stop posing a challenge to the socialism that persists here, while the anguish of the Cuban people on the island never seems to end.

4 thoughts on “Pork Price Shoots Up in Havana”