HAVANA TIMES, Feb. 26 — Well yes, it’s like what you’ve read: Camaguey resident Lina Estevez is one of the few Cubans allowed by her husband to come in their house with alcohol on her breath – of course there’s only a trace, it’s not like she’s drunk or anything.

She’s part of the quality control team at the Puerto Principe Beverage Complex, in the central Cuban city of Camaguey, 340 miles east of Havana. Lina has worked in this field for 20 years, and as a rum taster she admits, “I’m not addicted, because we don’t drink all day. A couple sips are all you need to evaluate the parameters.”

Ongoing demands in all the links of quality control in the production chain have allowed this factory to reach a solid position in its supply of the domestic market, to win prestige and to satisfy the sensory demands of people with elevated levels of “ethylic culture,” because in Cuba rum — like tobacco and baseball — holds a special place.

Despite their creating an old line of artisanal products and being paid low wages, the 87 workers at this refinery give all their efforts and experience each workday so that their rums and wines don’t “fade,” but that these continue conquering the palates of Cubans – the first market for what they produce.

The majority of the workers at this factory have been working there for more than 15 years, because “here something can always be ‘solved’,” admitted bottle labeller Ramona Garcia. (“Solving” is the word given by Cubans to theft or the diverting of resources in State-run factories, offices and businesses.)

A message in bottles

At any rate, Florencio Brown, an administrator connected to the beverage world for more than three decades, recognized strength in the stability of the work collective. “Each one of them has mastered their job perfectly. Their technological discipline facilitates the meeting of objectives. They were the true protagonists behind our work last year when, despite difficulties, we fulfilled our commercial production plan two months ahead of schedule, demonstrating a high rate of productivity in our work.” 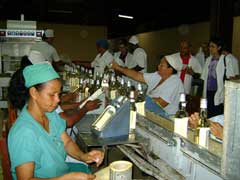 Brown complained about the shortage of bottles that the operation suffered during the first trimester of 2010. “The Raw Materials Recovery Company of the province was unable to respond to our needs,” he affirmed. He added that the strategy consisted of taking a good part of the liter-and-a-half plastic containers out of production. Basically, this is “an alternative that will are continuing to follow because of the high demand.”

According to the administrator, this solution has allowed a monthly reduction in bulk quantities of rum, which is about 150,000 liters, thus minimizing the classic “baptism” or adulteration that is so common, as well as harmful to consumers.

The plan for tourism, which embraces seven products, floundered for several years also because of the lack of bottles, which had to be imported because they had to be new. Of the different varieties of Arecha and Puerto Principe rum conceived for tourism, barely a third of the 37,000 crates anticipated for 2010 were produced, said Brown. He also complained that the difficulties posed by the island’s dual currency and its effects on managerial accounting did not stimulate production. “Concretely speaking, to fulfill my plans I need to produce more for the domestic market.”

The Ministry of Domestic Commerce and the national network sale points undertake the marketing of their main product, which is Puerto Principe rum refined to 34 and 32 proof alcohol, both bottled in plastic containers and glass bottles.

The mystery of the bouquet

An almost mystic air floats through the storage area where different types of rum, aguardiente and wine are aged. Hundreds of Canadian and American white oak barrels contain the precious liquids in their paunches. From the wood they slowly absorb that delicious bouquet that will later give it a delightful taste.

Soraida Alvarez, a true master in this mysterious and millennial art, indicates that the total aging capacity in this refinery is almost a half million liters, of which 95 percent is dedicated to solera rums that are used as a base in the end products. These rums age for between six months and seven years, according to their uses. In the rest of the barrels is “El Tradicion,” a sweet wine made from raisins and that pays homage to its name.

Alcohol, aguardiente matured for a minimum of one year and alcoholized syrup are the three basic raw materials for the creation of rum base or solera, Brown explained. A third of this rum is employed in products for tourism, especially in the three-year-old rum.

Nevertheless, 70 percent of the Puerto Principe products are made with pre-processed rum coming essentially from the Cardenas Rum Refinery and the Central Villa Clara Rum Refinery, though they “don’t always arrive with the required quality,” the administrator pointed out.

“As soon as the raw material enters we begin carrying out a physical-chemical analysis as to the alcoholic grade, the total acidity and the ester content, which are of great importance in the bouquet of the base rums,” explained out Lina Estevez.

After 10 years of experience, Darvin Castrillon (an all-round operative whose comrades affectionately call the “doctor” of the filling machine, the position where he has spent the most time) staffs the most critical point on the production line, since this is where breakdowns tend to occur.

“Here the principal difficulties are related to the wearing down of the pistons, which are very old and force me to position the bottles to keep them from drawing in air. Once I was trying to re-position a bottle that had drawn in air and it exploded. That resulted in an injury that required two stitches in my finger,” he explained, emphasizing the importance of workplace safety.

“The hoses also create problems because they’re made out of a material that is very difficult to find. The rum stiffens them, so it’s necessary to cut the tips so that they don’t take in air and fill the bottles too quickly. The springs come apart, which leaves them shorter, requiring me to apply more force to the lever. This precarious technological state demands a lot from me. It’s exhausting work, but I’ve gotten used to it and I’ve learned how to innovate…to do more with less, something in which we Cubans are masters.”