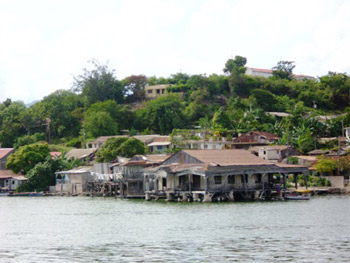 HAVANA TIMES, Nov. 5 — Almost in the center of Santiago de Cuba’s craggy bay, and very close to the so-called “Boca del Morro (the mouth), one can find an islet that was first populated back in the nineteenth century. That was when fishermen and their families erected their wooden shacks there and began living off the fruits of the sea.

Their food and their economic sustenance came from fishing as well as from rowing across the bay daily to sell their products in the coastal towns of Punta Gorda and Ciudad Mar.

After US intervention and the establishment of the neo-colonial “Republic” here in Cuba, an exquisite community for the privileged was set up on the islet, which was then dubbed “Cayo Smith.” Huge mansions were built there for the recreational pleasure of upper-class families and foreign visitors. These homes were known as the “El Cayo bungalows.” 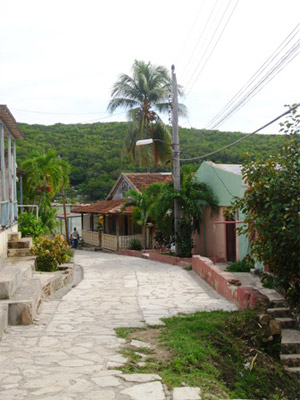 All of this created a striking contrast between the facades of these residences, constructed along quaint cobblestone streets and staggered across the hill, with the shabby shanties of the fishing families on the shore. Similarly, on the docks one could see the luxurious yachts and speedboats of the rich not too far away from the rowboats of the local seafarers.

After 1959, under the precept of eliminating social differences, the islet’s name was changed to “Cayo Granma,” in an attempt to eliminate Anglicisms and pay tribute to the revolutionary role of that yacht. Many of the abandoned bungalows were given to fishermen, while others became schools, casas de cultura, pharmacies and so on.

Until the 1990’s, it was an excellent break from the norm to go for a walk around “El Cayo” (as it continued to be called, since everyone quit calling it by its old name, though they didn’t refer to it by its new title either). Catching the motorboat at the bay-side park, one could take a scenic journey along the coast, stopping at the settlements of La Socapa, Caracoles or Punta Gorda and wind up at El Cayo.

Many of my childhood Sundays were spent there with my family, taking pictures and enjoying unforgettable meals in cozy restaurants with all kinds of seafood dishes.

But with the arrival of the economic crisis, the islet began to tarnish. After repeated attempts by people to hijack the motorboats to leave the country, travel across the bay was banned; instead we could only cross over to El Cayo from the neighboring dock.

Its restaurants now have nothing to offer the general public; today they appear to be places for clandestinely selling food to tourists. Deterioration hit El Cayo in such a way that again one can see the contrasting difference between the homes of those whose pockets allow them to keep their properties painted and well-maintained, and the dilapidating homes of those less well-off.

Nonetheless it still remains a wonderful trip, though the most pressing question posed by its residents and those who travel there is: When will El Cayo ever return to being like it was?