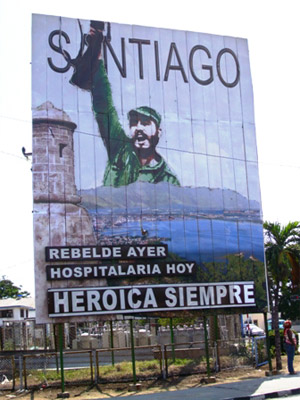 HAVANA TIMES, March 12 — Everything seems to be ready to welcome the Pope, who will visit Cuba from March 26 to 28. President Raul Castro announced that the Caribbean island “will receive Pope Benedict XVI with affection and respect,” in this way reflecting the attitude of approval and welcome to the reception of His Holiness.

At the entrance to the city of Santiago de Cuba and many other sites here, there have always been displayed the slogan “Rebellious Yesterday, Hospitable Today and Forever Heroic.”  These days the second adjective is most palpable.

The Catholic Church, the government, all institutions and people in general have put all of their energies in working to restore and beautify the places soon to be visited by Pope, since he will land in this city first.

Where he and his delegation will pass, the roads and avenues have been repaired, the trees pruned and the curbs painted.

This time the scenes will be different from those seen by John Paul II. This trip will have as one of its primary objectives a remembrance of the 400th anniversary of the apparition of the figurine called La Virgen de la Caridad de Cobre. The Pope — on this “pilgrimage of La Caridad” — will bless the saint and conduct a Mass in the chapel.

The three sites that will display their best fineries for the visit by Joseph Ratzinger Aloisius are the village of El Cobre (where the “shrine of the patron saint of Cubans” is located), the Archbishopric of the city, and the Antonio Maceo Plaza of the Revolution. 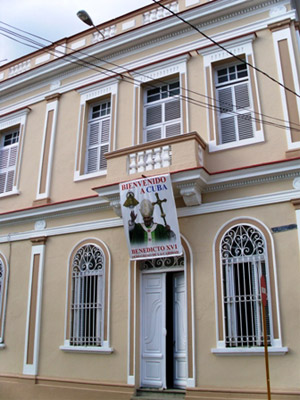 Santiago de Cuba seems to be trembling with so many expectations for that visit, because the city’s authorities are not only emphasizing the rebuilding effort, they’re also engaged in an almost frantic effort to guarantee security and security at all levels.

Directives are being issued at workplaces and schools, block club meetings are being called by the Committees for the Defense of the Revolution (CDRs) and extreme security measures are being taken (from the felling of large trees and the replacement of street lighting, to the deployment of an alarming number of police and plain clothes agents who are out in the streets day and night).

All of this made me wonder. Are these precautions for the personal safety of the Pope and his delegation (which I don’t think is at risk of any threat in our city), or do these stem from fears on the part of the state of some unpleasant reaction (unpleasant for them) by some segments of the population.

If this were to occur, its repression would take place in front of the distinguished visitor as well as the international press, something that they would like to avoid.

So it might end up being said that people fulfilled the first and third adjectives that describe the city of Santiago: Rebellious yesterday, forever heroic.

One thought on “Santiago de Cuba Decks Out for the Pope”