The company is the first and current firm exploring the deep waters of Cuba’s Exclusive Economic Zone (EEZ) in hopes of tapping into the 9.3 billion barrels (bbl) of oil that the United States Geological Survey (USGS) estimates is stored there.

The latest blow to the company comes from Florida representative Rivera, who is under FBI and IRS investigation for “living off his campaign contributions for nearly a decade,“ Rivera successfully offered an amendment to the House version of the National Defense Authorization Act for Fiscal Year 2013 last week that would prohibit defense contracts from being awarded to any company that does business with nations on the State Department’s State Sponsor of Terrorism (SST) list: Iran, Syria, Sudan and Cuba.

(Ironically the proposed legislation also contains a clause that prohibits prisoners at Guantánamo from being transferred to SST countries, despite the fact that the Gitmo prison is located in Cuba!)

The Congressman’s press release mentions only one company that would be affected by his amendment: Repsol, which happens to have over $300 million in contracts with the US Defense Dept.

But Rivera’s jab at Repsol still has several hurdles before becoming a law. So far the Senate version contains no similar language and if that remains the case then the amendment can be stripped out in the final reconciliation between the two chambers’ versions. 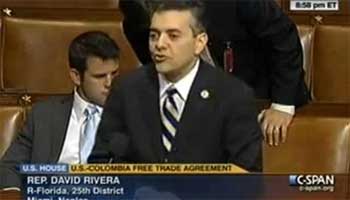 The amendment is intended to make up for the fact that Rep. Ros-Lehtinen failed to pass a bill that would have prohibited all companies involved in oil exploration in Cuban waters from doing business with the U.S.

It is also meant to provide a work-around for the controversial state law signed by Governor Scott last month that would disallow state and local governments from contracting companies that do business in Cuba or Syria.

As pointed out by the Miami Herald, only a handful of companies dealing with Syria would be affected while over 200 doing business with Cuba would be.

Aware that states are not free to establish their own foreign policy, Scott immediately issued a signing statement acknowledging that the law is unenforceable and citing the 2000 U.S. Supreme Court ruling, Crosby v. National Foreign Trade Council, which prohibits states from making laws regarding foreign commerce.

Rivera responded to Scott’s backtracking by threatened to sue him if the law is not enacted. This led to the governor backtracking on his backtracking and now he says he will enforce it. In that case, it is likely that Repsol, the US Chamber of Commerce, as well as a few Canadian companies will sue him instead.

Senator Rubio, falling back on the current weapon of choice of US lawmakers of Cuban descent, claimed that the law is not in conflict with federal law, but rather reflects current national policy because Syria and Cuba are designated SST.

In fact, a similar law was held up by the courts that allowed Florida to restrict university funds from being used for any academic program that involved such countries. Again the only country affected was Cuba.

In this concerted effort to ensure financial distress in Cuba both the target, Repsol, and the weapon, the SST list, are merely means to an end. Repsol is only one of many companies lined up to drill in Cuban deep waters and Cuba’s inclusion as an SST is unwarranted and purely political.

The latter was made clear by former governor Bill Richardson’s disclosure that he was authorized to offer the Cuban government removal from the list in exchange for the release of USAID sub-contractor Alan Gross who smuggled illegal equipment, designed to facilitate undetectable communications, into Cuba.

One thought on “The 5R’s: Rivera, Rick, Rubio, Ros and Repsol”