HAVANA TIMES — The endnotes of What Lies Across the Water* opens with: “The truth is — everybody lies.” But I believe author Stephen Kimber when he says that as part of his research for this book he read the more than 20,000-pages of United States of America vs. Gerardo Hernández ” from opening gavel to final sentencing.” 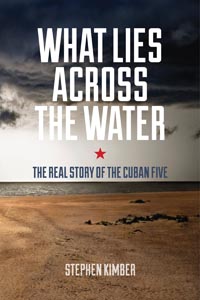 His detailed presentation of the case of the Cuban Five– five counter-terrorism agents, who operated in Miami and who refused to plea bargain when the larger network of Cuban agents they belonged to was arrested, is evidence of the painstaking digging Kimber has done to bring readers this full-blown account.

Although the subtitle is The Real Story of the Cuban Five, this book is much more than that.  It peers into all the nooks and crannies of the last couple of decades of the ongoing saga of Miami-originated violence against the Cuban people, its leaders, and anyone perceived as friendly to its government or economy. It shines a light on famous villains such as Luis Posada Carriles and Orlando Bosch and introduces lesser known perpetrators like Francisco Chavez Abarca and Santiago Alvarez.

Relying on news articles, interviews, court evidence and government documents, in both English and Spanish, Kimber reports on the failed attempts by the U.S. and Cuban governments, in the late 1990’s, to cooperate on mutual national security concerns, employing a cast of characters ranging from U.S. diplomat Michael Kozak and Nobel laureate Gabriel Garcia Marquez as well as the FBI and Cuban State Security.

He draws from documents obtained through FIOA requests, filed by the National Security Archives and investigative journalists, to give shape to the newest piece of the puzzle– Alan Gross, a USAID subcontractor hired to carry out aspects of the State Department’s regime change program inside Cuba, who is currently serving a 15 year sentence in a Cuban prison.

Far from being a boring account of deeds and misdeeds, Kimber employs eloquent prose and an enjoyable style to draw the reader into the tangled layers of terrorism and murder, espionage and deception, propaganda and myths, life sentences and impunity, meanness and hatred, love and sacrifice, romance and solitude, patriotism and delusion, good intentions and bad, and lies, lies, and more lies.

It reads like a page-turner novel, but it’s not. It is the unbelievably tragic history of modern U.S.-Cuba relations. Kimber, a professor of journalism at Halifax University and author of several other books, uses his brilliant turn of phrase to help his readers navigate through the tall tales and “official truths” guiding them to a more realistic view of the landscape and the prospects for diplomatic relations between the two feuding countries, for freedom for Alan Gross and the four Cuban agents still under lock and key, and for a life without fear of violence and intervention for the Cuban people.

I have only one criticism of the writing: the constant use of the term “America” when referring to the United States.

The only shortcomings I can mention in terms of content is, in reality, just my desire to keep the conversation going. Kimber begins his book listing its main characters, and ends it with a “where are they now” section. I would like to have seen more names on this lists.

For example, Michael Kozak, who was head U.S. diplomat in Cuba during the hotel bombing campaign and whose role in the FBI-Cuban State Security cooperative efforts are outlined in the book, is currently the Deputy Assistant Secretary of the Bureau of Democracy, Human Rights, and Labor, which receives large sums of Cuba regime change money, which it funnels into the National Endowment for Democracy.

Hector Pesquera is another. As the book explains, he was the FBI agent in charge who ordered the arrest of the Cuban agents and later ordered the FBI’s files on Posada Carriles to be destroyed. While focusing his attention on the Cubans, he completely missed the 9-11 attackers who were preparing, within his jurisdiction, to murder thousands of U.S. citizens. Pesquera is currently the Superintendent of the Puerto Rico Police and recently there has been speculation that he is in the running to replace Janet Napolitano for Secretary of Homeland Security.

Lastly, whatever happened to the agents who turned state’s evidence against their brothers? Their sentences were up long ago. Surely they were not welcomed back to Cuba, but would they be safe in Miami. The big unsolved mystery in the case of the Cuban Five is how the FBI was originally tipped off to the agent network. Is there any reason to believe that one of those agents was a snitch all along?

I have been following the case of the Cuban Five for over a decade and have translated dozens of articles about their case. I have also translated entire books on exile violence against Cuba, but this book offered tidbits that I was unaware of, drew connections that I had not noticed before, and most importantly to me, confirmed some suspicions and dispelled a few rumors that I was unsure about. I am confident that even expert Cubanologists will find What Lies Across the Water useful, informative, at times infuriating, but always entertaining.