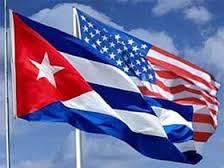 HAVANA TIMES — Despite the agreement to re-establish diplomatic ties signed this Monday, the United States and Cuba have many unresolved disputes after more than fifty years of ideological conflict, DPA reported.

Below are the main differences that could make the normalization of relations between the two countries difficult for some time to come.

Lifting of the embargo: The demand regarding the harsh economic and commercial sanctions that the United States has been applying on the island for decades is Cuba’s main battle horse. The embargo, which has governed relations almost entirely since 1962, is also widely rejected by the international community. In its 2014 “Report on the Blockade,” Cuba estimated the total damages caused by the embargo at 116.88 billion dollars. In January of this year, President Raul Castro spoke of the need for “fair compensation” for the damages caused by the embargo, without offering any further details.

US programs and support for Cuban dissidents: In the same speech, Castro demanded that Florida radio and television broadcasts aimed at the island – many of which are financed by US government programs “for the democratization of Cuba” – cease entirely. Havana is also critical of the support Washington offers dissidents on the island, such as the independent journalist courses offered at its diplomatic facilities. Cuba accuses government opponents of being “mercenaries” intent on destabilizing the country.

Return of Guantanamo: The controversial naval base on Cuba’s Guantanamo Bay, on the island’s easternmost territory, is under the control of the United States by virtue of a lease agreement signed in 1903. Havana demands that this territory be returned to Cuba, but Washington refuses to do so, pointing out the perpetual nature of the lease agreement, which Cuba has not recognized since 1959.

Human right situation in Cuba: On several occasions, the United States has underscored that it will continue to criticize the civil liberties situations in Cuba and demanding rights for the island’s political opposition.

On announcing the historical rapprochement with Cuba on December 17 last year, President Barack Obama stressed that his administration would continue “openly addressing differences” with Cuba on issues of “democracy and human rights.”

The US Department of Justice commission that addresses these types of claims against foreign governments has to date approved 5,913 claims related to Cuba. The amount is over 1.9 billion dollars at the time of expropriation, the equivalent of 7 billion dollars today, The New York Time estimates.