HAVANA TIMES — A few months ago, I wrote about this building in an article entitled ‘Buildings in our collecive memory’.

The Tavel used to be situated at 559 21st street between C and D Streets. It was constructed at the beginning of the 20th century, built with steel beams covered in concrete. The rooftop structures were made of small joists and infill tiles. It had six floors and 30 apartments in total, some were four bedroom apartments, others two and six only had 1 bedroom.

Today, El Tavel only belongs to the group of buildings that will be remembered by a slight few. It began to show clear signs of deterioration in the late ’60s. During the decades that followed, its inhabitants held on to the hope of seeing it one day restored to its former glory. In the ’90s, the National Assembly of People’s Power allocated a budget to repair five apartment blocks. What exactly happened to this money? Nobody knows.

And this went on and on for years until, in 2003, when it was declared that the building was no longer inhabitable and its residents were relocated to other places. The doctor’s final prognosis: certain death.

Finally, last week, this building said goodbye forever. News of the event had been wrapped in silence. Cuban TV’s primetime news program spoke of the event in a matter-of-fact manner and as something completely natural, something that inevitably had to pass. Whilst TV cameras were recording the report, neighboring residents were waiting for the demolition brigade to arrive and to begin the task of knocking down the remains of the building.

The reporter also discussed another topic; that the demolition was affecting other buildings in the vicinity. A middle-aged woman voiced her concerns on-screen, worried about how the demolition work would affect her own house, which borders the Tavel, and also in danger of collapse.

Then, this woman spoke of the dust which her bedding and personal objects were exposed to. And this is because not all of the necessary measurements had been taken to ensure that the demolition would have as little impact as possible on the population.

However, nobody spoke of the former residents of the Tavel and their pain, of the people who dreamed that maybe, one day, the so-called Havana Titanic would be restored for future generations to live in. 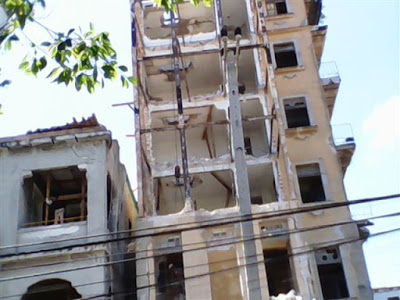 Sometimes we get so immersed in cold statistics that we forget about feelings. These ‘minor’ stories are only depicted, more often than not, in national fiction or documentaries, not in our everyday journalism.

Today, the Tavel speaks to us from its mountain of rubble. Along with the Alaska and the Pedro Borrás hospital, it will no longer form part of Havana’s skyline. I still believe that the López Serrano building can be saved thanks to the determination and efforts of architect Juan García Prieto and a group of young professionals who are the authors of the comprehensive rehabilitation project, with a collaborative budget.

I can’t end this article without quoting, once again, the sociologist Carlos García Pleyán, who suggests that: “We have to reexamine the relationship between the administration and citizens, and introduce collaborative planning and budgets”. Economic sustainability in the urban rehabilitation and revival process can only be achieved by local economic development, stemming from local resources.

An articulate and participatory decentralization of the economy can objectively deal with public demands and can improve the services offered. I thought about all of this as I walked past the Tavel’s mortal remains. Although I never lived in this building, I couldn’t help but show support to its former residents.

4 thoughts on “The Tavel: Another Havana Giant Bids Farewell”