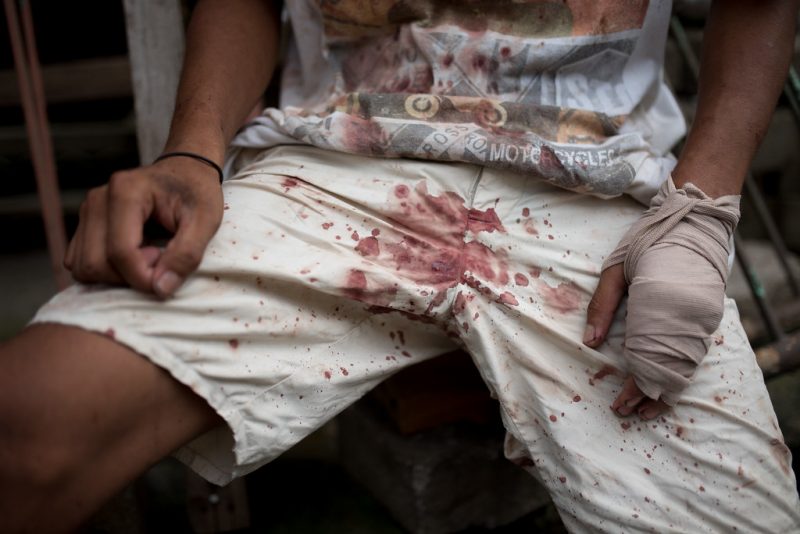 Two years after the civic rebellion, more than 325 deaths still go unpunished and thousands of injured Nicaraguans live forgotten and with lifelong consequences.

HAVANA TIMES – Mornings are complicated for Holber Zelaya Gomez since almost two years ago when a paramilitary of Daniel Ortega’s government unloaded a shotgun into his back. His wife has to carry him to sit him down on his wheelchair, and then lay him down again to help him perform his bodily functions.

Of the 11 bullets that were embedded in his back, one causes the most trouble: the one that hit in his rectal area and harmed part of his spine. This campesino from Puerto Príncipe, Nueva Guinea, must now use a wheelchair. He has lived with this disability for the past two years. His sphincter nerve does not respond, and he suffers acute pains. Either on his bed or a chair, Zelaya Gómez now depends on a medical device to completely drain his physiological waste. “I live with a tube”, says this 36-year-old man bitterly.

Zelaya Gómez is well-built, tall, has wide shoulders and solid legs. He barely fits in that old light blue wheelchair, whose cushion has broken under his weight. His chest is also wide. The Superman symbol on the shirt he is wearing looks stretched like Clark Kent’s. But the campesino’s muscular body withers every day due to immobility. “I’m miserable, torn apart”, he says regretfully.

The injuries have not been counted

This campesino is part of an unknown statistic in Nicaragua after the massacre that began in April 2018: of persons who will have to cope with living with disabilities because of state violence by Ortega-Murillo. Mostly young people who, without having been at war, were left with injuries equal to or worse than those that occur in a conventional battlefield. The difference is that these kids went out to peacefully protest against the Ortega Regime and ended as targets of the police and paramilitary.

One of the first injured in April was a zootechnical student at the Agrarian University of Managua (UNA), Roberto Rizo. The young man lost his left eye on April 19 from a pellet fired by a special force’s policeman. Like him at least nine young people have lost eyes.

There are others who survived the precise shots they received in their skulls, like Enoc López. His CT scan shows at least three projectiles in his skull. One was removed at the Lenín Fonseca Hospital in Managua, and he is now living with partial immobility, lung injuries and bowel problems.

Juan Bosco Rivas also received a lethal shot on his face while in the city of Masaya. He was miraculously spared, but he lives with the anxiety that the bullet lodged millimeters from his foramen magnum, may move and cause some type of paralysis. It is ironic because Rivas loved boxing.

College student Bryan López Méndez was shot through his intestines and is living with a colostomy bag.

“Several thousand were wounded during the repression and it was very difficult to document all the cases. But with time we start learning more… like a boy in Matagalpa who was shot in the mouth and almost died. Currently he is exiled, living with the effects here in Costa Rica”, said human right defender, Gonzalo Carrion. Cases like that of the Campesino Zelaya Gomez, which had been kept secret for fear of retaliation, but which two years after the April Uprising surface publicly, due to the economic difficulties faced by the victims

Wounded at the Lovago roadblock

Before he started to protest against the Ortega-Murillo regime in April 2018, Zelaya Gómez was a day laborer. He worked “swinging the machete” in the farms of that Nicaraguan town. He lived off the land. So, when he heard that because of a canal project the campesinos were going to be stripped of their land, he joined the movement against the project of Chinese magnate Wang Jing and Daniel Ortega. That is why he had no trouble joining the April Uprising. He was already organized in an opposition front. 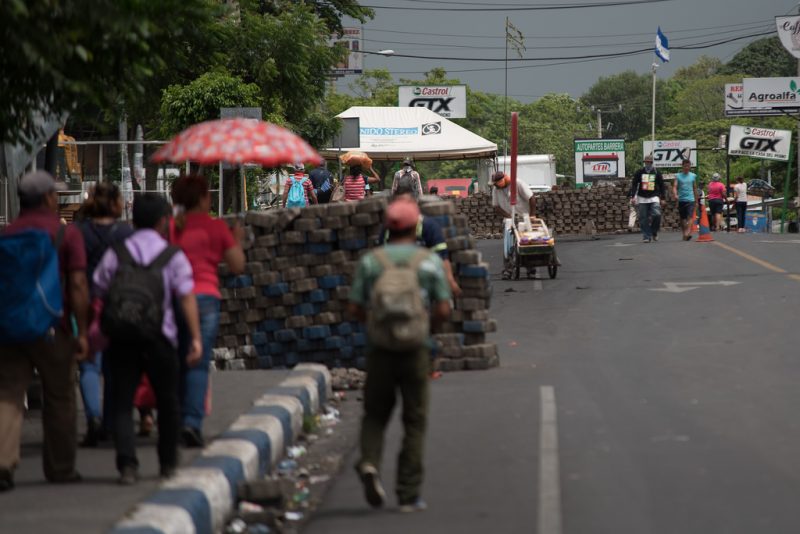 Zelaya Gómez left his family in Puerto Príncipe and went to the campesino roadblock at San Pedro de Lovago, in the north of the country. The Lovago roadblock was one of the fiercest, resisting the police and paramilitary attacks, who tried to knock it down for over a month. Human rights organizations called what happened at Lovago on July 14 a massacre. The articulated attack by government forces gained the upper hand, and hundreds of campesinos fled into the mountains for safety. The actual extent of this attack was not immediately known, as almost thirty campesinos were missing for weeks. However, Zelaya Gomez was not injured in this attack.

It happened a month earlier, on June 12th, when Sandinista paramilitaries broke through those barricades with high-caliber weapons. Although at the time they were unable to dismantle the campesino resistance, they did cause damage. Zelaya Gómez remembers climbing a hill to confront the paramilitaries, but he did not realize that someone was chasing him. He fell immediately and did not even feel the impacts. Hours later he felt the pain when he awakened at a farm other campesinos had taken him for help.

Attack at the Lóvago roadblock

Zelaya could not be transferred to a hospital because the roadblock was surrounded by police and paramilitaries. He was treated by a nurse, but the lack of medical supplies caused one of the pellets to gangrene part of the skin near his rear. When the Lovago roadblock was taken down in July many of the campesinos that were with Zelaya fled to Costa Rica. He stayed at the farm, and his family and others helped him remain stable. They managed to control the wound with the help of other doctors. Since they were afraid to transfer him to a hospital, it was not until December 2018 that they decided to take him to Managua for surgery and to remove the troubling bullet.

With help from Nicaraguans abroad Zelaya Gomez was able to collect $2,000 to pay for his operation at the Hospital Salud Integral. The doctors told him that it was possible to regain mobility, but only if he underwent physical therapy. But unable to work and without financial help, he preferred that what little money he could get would go towards supporting his three children, aged 6, 7 and 15, respectively.

Two years have passed since the April Uprising. It is a date that seems far away. This campesino has felt time slow down and to him people’s interest in helping (“unfortunates like me”, he says) has diminished.

“I suffer from stomach aches because I don’t evacuate when I want to. It won’t let up. I don’t feel. It’s because of the tube,” Zelaya said. “Sometimes it hurts to think so much about this misfortune. I am disabled for the rest of my life”, he added, and he asks for help, because he says Ortega’s Government will not help him since “he joined the civic struggle”.

“I don’t tell the government anything. It doesn’t help the people they consider good, much less me who’s been in the barricades. The truth —says the campesino— what I want now is to die peacefully”.


2 thoughts on “The Wounded from the Civic Uprising in Nicaragua ”

Cuban TV and the Ministry of Interior Violating our Civil Rights